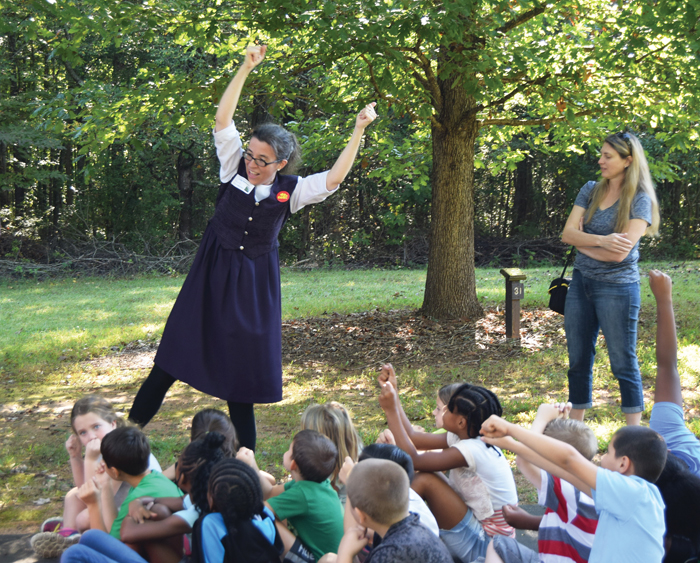 Storyteller Claire Ramsey gets her audience involved in her story. Ramsey is one of 25 storytellers who performed at "Stories by the Millstream," a Rowan Public Library program for county second graders. All 20 Rowan-Salisbury elementary schools participated this year, in addition to home school groups and several county private schools. Rebecca Rider/Salisbury Post

MILLBRIDGE — Each fall, Sloan Park turns into a place of magic and imagination.

The leaves, just beginning to fall from the trees, become butterflies and dragons; each spider in his web is Anansi, up to his old tricks; every squirrel looking for nuts is a helper and a friend; and the quiet, yellowing woods is full of creatures to battle and adventures to discover.

Thursday morning, groups of children huddled on the park’s concrete paths, sat under trees or listened in the dark of an arbor while master storytellers made the air come alive with tale after tale. Known as “Stories by the Millstream,” the day is a partnership between local schools and the Rowan Public Library, organizer Emma Rose said.

Now in its 18th year, the gathering pulls in students from all 20 Rowan-Salisbury elementary schools, home-school groups, and multiple private schools, and it draws master storytellers from all over the state.

Each story and performance took the form of a fable, teaching students a valuable lesson and helping them see the magic in everyday life. Stories ranged from age-old tales of trickster Anansi to original stories.

Jayla Geter, a second-grader at Enochville Elementary, said her favorite was one of the Anansi stories she had heard.

“I liked that the story was about magic,” she said.

“I’ve never gotten to hear these before,” she said of the stories.

Veteran storyteller Claire Ramsey told an enraptured group of students from Woodleaf and Enochville elementaries a tale about a group of mice and a cat made from the wind. It was a story she herself wrote after seeing a piece of medieval art that looked like mice towing a snared predator across a plain.

“If you work together, you can make peace with what you think is your strongest and scariest enemy,” she told students.

Ramsey lives in Oxford, just north of Durham, and makes the two-and-a-half-hour-drive to Rowan County each year for Stories by the Millstream.

“It’s always been the highlight of my year,” she said.

It’s a storyteller’s dream, she said — the audience is eager, the setting is beautiful and the company is skilled. Ramsey compared the event to an analogy her father once told her: climbing a mountain is difficult and arduous, but if you make the journey, you’ll be surrounded by others who made the same trip and possess the same level of skill.

“I think a storytelling festival like this is a mountaintop,” Ramsey said.

Others told tall tales, like Logie Meachum of Greensboro, who told students that he and his cousins invented the afro hairstyle to save themselves from a broom-wielding grandmother.

Meachum, like many of the storytellers at the park, drew inspiration from the audience.

“Children are my original love,” he said. “It has been my original salvation. It has been something I cannot stop for fear that the earth will reach up and smite me.”

While Meachum takes his job seriously, he had kids laughing and singing along with his antics, music and poetry. And he left them with a word of advice:

“Stay in school, get your education,” he said. “If they can make penicillin out of moldy cheese, they can make something outta you.”