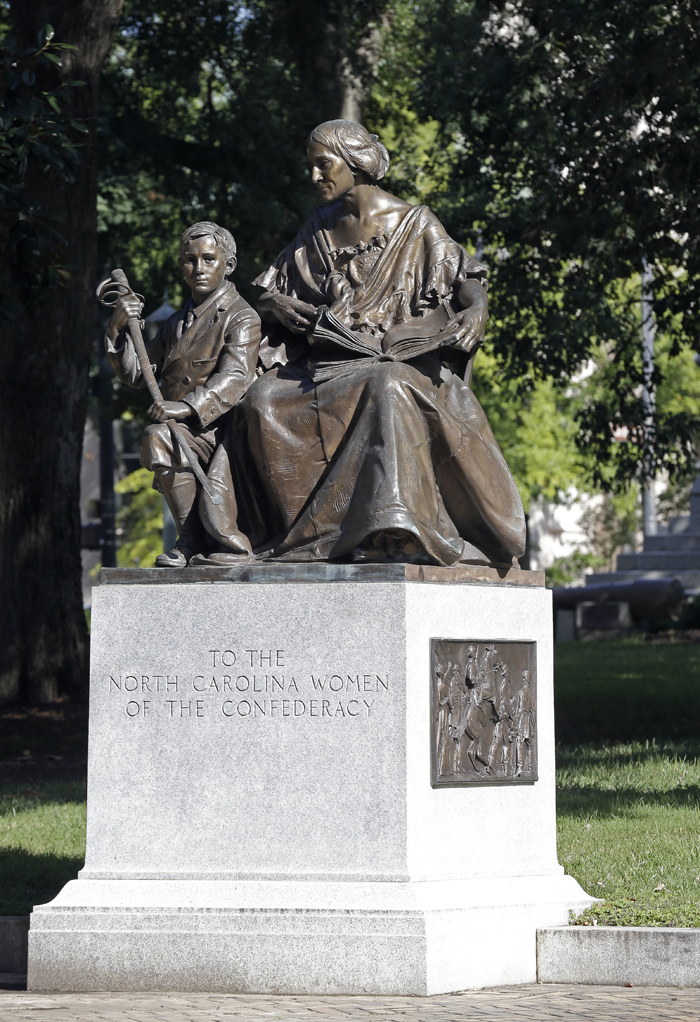 This Tuesday, Sept. 19, 2017, photo shows a monument recognizing the North Carolina women of the Confederacy at the state Capitol in Raleigh, N.C. North Carolina Republican lawmakers on Thursday pressed a state panel not to grant Democratic Gov. Roy Cooper's request to relocate Confederate monuments from the old Capitol grounds, with one leader predicting that any such approval would be overturned in court. (AP Photo/Gerry Broome)

RALEIGH — Republican lawmakers on Thursday pressed a state commission to deny Democratic Gov. Roy Cooper’s request to relocate Confederate monuments from the old Capitol grounds, with one leader predicting that any such approval would be overturned in court.

Two dozen House GOP leaders sent a memo to the North Carolina Historical Commission on the day before the panel is to meet to consider the Cooper administration’s petition to move three monuments to Bentonville Battlefield, a Civil War site 50 miles south of Raleigh.

Senate leader Phil Berger also copied commission members with his own letter to Cooper asking the governor to withdraw his request, saying the proposal has many problems and the commission lacks authority to grant it.

The commission “would likely lose in court if and when North Carolinians sued over the removal of the monuments,” Berger wrote.

“We cannot continue to glorify a war against the United States of America fought in the defense of slavery,” Cooper wrote last month.

A 2015 state law, however, largely prevents monuments from being removed permanently without legislative action and severely limits their relocation.

The relocation decision rests with the 11-member commission, a panel of professors and local preservation boosters who usually work in anonymity. Seven were appointed or reappointed by GOP Gov. Pat McCrory, the others by Cooper.

The law says the commission’s relocation must be to a “site of similar prominence, honor, visibility, availability and access that are within the boundaries of the jurisdiction from which it was relocated.”

The administration’s petition contends that Bentonville — the site of the largest battle ever fought in the state — would qualify for that exception and help preserve the monuments.

The March 1865 battle marked the last full-scale action of the Civil War in which a Confederate army mounted a tactical offensive.

Cooper also has said he’s worried that protesters could be injured if they try to topple monuments, and that white supremacists may come to sites in retaliation.

The monuments include a 75-foot monument completed in 1895 to the state’s Confederate dead. The others are the North Carolina Women of the Confederacy monument, dedicated in 1914, and a statue of Henry Lawson Wyatt, dedicated in 1912. Wyatt is described on the statue’s base as the first Confederate soldier killed in battle during the Civil War.

The petition does not cover the “Silent Sam” statue at the University of North Carolina at Chapel Hill, the site of demonstrations earlier this year.

Berger criticized Cooper in his letter for “sowing political discord” through pressing the relocation of the monuments when “we should be cooperating to solve these significant challenges.”

Berger also described it as “selective outrage” for Cooper to leave in place statues on the Capitol grounds of Gov. Zebulon Vance, a veteran of the Confederate army and governor during the Civil War, and Gov. Charles Aycock, who led a white supremacist political movement in the late 1890s. Both were Democrats.