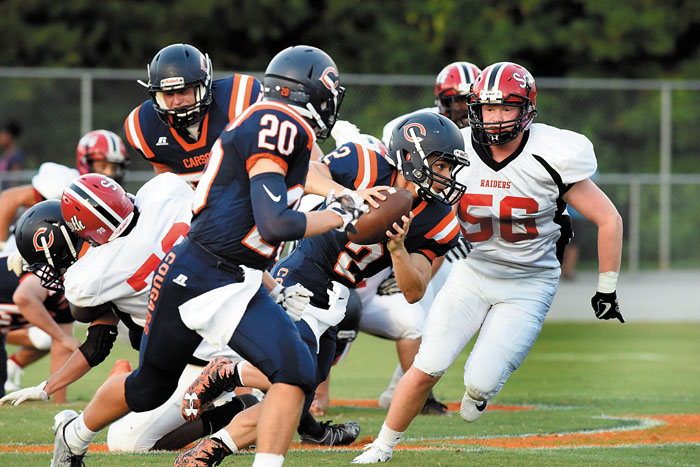 Photo by Wayne Hinshaw, for the Salisbury Post ... Carson and South Rowan, shown playing on Aug. 18, are both home tonight — Carson hosting Central Cabarrus and South goes against North Davidson.

This is a compelling and probably a telling night for Rowan County football.

Salisbury, which has compiled a three-game winning streak against lesser opponents, faces a serious challenge on the road against a talented Lexington team that dominated North Rowan for 38 minutes before unraveling. North Rowan, as you probably recall, dominated the second half on opening night and handed Salisbury its only setback.

It’s unlikely anyone in the Central Carolina Conference is going to be able to deal with a North Davidson team that beat Davie County by three touchdowns, and Ledford can’t be counted out. But it appears that the Salisbury-Lexington winner could finish as high as the runner-up in a nine-team league.

Salisbury coach Brian Hinson isn’t thinking about second place, not with his team 2-0 in the CCC, but he is well aware of how vital this game is to Salisbury’s season.

West Rowan, staring at 1-3 for the first time since 1996, will be staring at 1-4 if it can’t right the ship against a Concord program that has generally had the Falcons’ number over the years. Concord may not be as good as it usually is, but neither are the Falcons.

North Rowan gets 1A Yadkin Valley Conference play started tonight at home against North Moore. Barring a landing by aliens, or something equally catastrophic, the Cavaliers will start 1-0 in league play.

On paper, at least, it will be another long night for South Rowan, East Rowan and Carson. South is  taking baby steps forward on the long, winding road back toward competitiveness, but East Rowan stepped back a few miles in a really lopsided loss to Mount Pleasant last week. Carson got mauled by Davie County, but that mauling wasn’t unexpected.

Rowan teams are now 4-10 playing teams outside the county.  A 3-3 mark for Rowan schools appears to be the best-case scenario tonight — and that’s if Salisbury and West Rowan play really well.

The best game should be at Davie County, where A.L. Brown is making a visit. Like the Salisbury-Lexington game, that one is a toss-up. Most g ames start at 7:30 p.m. Some of these might be over, for all practical purposes, by 8 p.m. North Rowan kicks off at 7 p.m. tonight.

The predictions were 5-o last Friday on an easy night for predictors and are 18-4 overall.

What happens: It’s speed against speed, and there will be a lot of big plays. Lexington has the home field and might make one more.

Season to date: Both have won against Mooresville and West Rowan. The Wonders’ loss was to Marvin Ridge. Davie lost early games to Page and North Davidson. Both teams have won three in a row.

What happens: Both defenses are stout against the run, so it’s going to come down to who can throw with more success. That’s probably going to be Davie. The Wonders have better statistical numbers — they’ve scored more points and allowed fewer — but Davie has played the tougher schedule, facing four above-average teams. It should go to the wire.

Last meeting: East’s 8-0 win in Granite Quarry in 2016 was due to a Wesley Porter pick-six.

Season to date: Northwest Cabarrus beat previously unbeaten North Stanly last week and has turned things around after several dreadful seasons. East owns two wins against teams that are still winless, but it has fallen behind 33-0 and 50-0 the past two weeks.

What happens: Northwest Cabarrus lost in overtime to Mount Pleasant. That’s probably all you need to know.

Last meeting: That was the “Brenden Westbrook game.” Now a Catawba freshman, Westbrook demolished the Vikings, 31-14, with two big-play TDs in a matter of seconds.

Season to date: Nothing good has happened for Carson since edging South Rowan on opening night. The Cougars have lost four straight and QB Cole Sifford is sidelined. Central’s losses are to Hickory Ridge and Mount Pleasant. Central pounded East Rowan two weeks ago, and is coming off an open week.

State ranking by MaxPreps: No. 149 Central Cabarrus, No. 308 Carson

What happens: Carson always fights, but Central is a lot deeper, a lot faster and a lot more talented. On the positive side, Carson has a better chance to compete than it did against A.L. Brown and Davie.

Series: South was frequently victorious when the teams were 4A rivals in the Central Piedmont Conference. South leads the series, 12-4.

Season to date: While the opening of Oak Grove has reduced North Davidson to 2A size, the Black Knights are still basically competing with a 4A football roster (60-plus players). They’re considered one of the state’s better teams and are certainly a top-5 team in 2A. The Black Knights own a victory against Davie County, a good 4A. South Rowan has improved by all statistical measures, but it has still been on the wrong side of the scoreboard every Friday.

State ranking by MaxPreps: No. 22 North Davidson, No. 359 South Rowan

What happens: Unless you believe in miracles, a running clock in the second half.

Series: Concord leads 16-4. The Falcons’ most recent win was in 2011 in the third round of the 3A state playoffs.

Season to date: Concord has lost to 4As Hough and Hickory Ridge. The highlight has been a one-point win vs. Mount Pleasant. West’s schedule also hasn’t been much fun, with losses to Davie and A.L. Brown the last two weeks.

What happens: Concord has better offensive and defensive numbers and also has the home field. West is capable of a mild upset if it plays the way it did against North Rowan.

Season to date: North Moore’s lone win came at the expense of North Stokes (0-5). North owns a couple of good wins. Besides the comeback for the ages against Lexington, the Cavaliers’ victory over Salisbury is looking more impressive every week.

What happens: North Rowan is the only county team in the state poll (seventh in 1A) and despite getting crunched in Mount Ulla is also the most highly regarded Rowan team by MaxPreps.