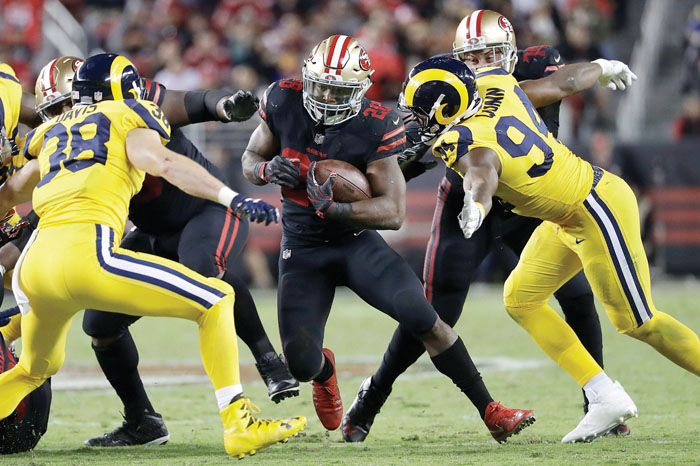 SANTA CLARA, Calif. (AP) — Jared Goff threw for 292 yards and three touchdowns and Todd Gurley ran for two TDs and caught another to help the Los Angeles Rams put up another big offensive performance with a 41-39 victory over the San Francisco 49ers on Thursday night.

The NFL’s lowest-scoring team last year looks like a completely different outfit this season under first-year coach Sean McVay thanks to vastly improved play by Goff after a rough rookie season as the No. 1 overall pick.

The Rams (2-1) have also been helped by the additions of receivers Sammy Watkins and Robert Woods and the play-calling of McVay as they have scored 107 points through three games. That’s the second-most in franchise history, trailing only the 119 by “The Greatest Show on Turf” squad in 2000.

This win didn’t come easy as the Rams nearly blew a 15-point lead, giving up two late touchdowns, fumbling a kickoff return and failing to recover an onside kick. But Los Angeles managed to stop a potential game-tying 2-point conversion and then used an offensive pass interference penalty against Trent Taylor and a fourth-down sack by Aaron Donald to stop the Niners after the onside kick.

The 49ers (0-3) scored five touchdowns after failing to get any the first two weeks but still came up short in part because a missed extra point by Robbie Gould forced them to try for 2 on their late touchdown.

This time it was a tired defense that hurt San Francisco. After facing 79 plays in a 12-9 loss at Seattle on Sunday, the 49ers appeared to run out of gas on the short week as Goff frequently had wide-open receivers, especially on third down.

All three of Goff’s touchdown passes came on third down, including a 13-yard pass to Watkins early in the fourth quarter that gave Los Angeles a 41-26 lead.

The Rams needed all that offense on a night where Brian Hoyer threw for 332 yards and two touchdowns and ran for another score.

QUICK START: The Rams took just 12 seconds to get on the board as Nickell Robey-Coleman intercepted Hoyer on the first play from scrimmage and returned it to the 3-yard line. Gurley ran it in on the next play to give the Rams a 7-0 lead.

DROUGHT BUSTER: The 49ers came into the game without a touchdown on the season but broke through in the first quarter with some help from the Rams. After Blake Countess jumped offside on a punt, the Niners took advantage of the second opportunity and drove to score on Hoyer’s 9-yard run 126:43 into the season. That was the longest it took a team to score its first TD since 2006 when both Tampa Bay (143:03) and Oakland (127:10) took more time.

FOURTH DOWN CALLS: Both teams drove to the opposing 1 on their opening drives of the second half with help from a Willie Mays-style basket catch by Watkins and a perfect toe drag on the sideline by San Francisco’s Pierre Garcon. But the Rams opted to kick a short field goal, while the 49ers went for it and converted on Carlos Hyde’s 1-yard run that cut Los Angeles’ lead to 27-20. Hyde added a second 1-yard run on fourth down in the fourth quarter.

INJURIES: Rams S Lamarcus Joyner left the game in the first half with a hamstring injury. … Los Angeles C John Sullivan injured his groin in the second half and Watkins and Tavon Austin left with concussions. … 49ers S Jaquiski Tartt (concussion), FB Kyle Juszczyk (neck), DL Tank Carradine (ankle) and LB Brock Coyle (concussion) all left with injuries in the second half.

UP NEXT: The Rams travel to Dallas on Oct. 1. The 49ers visit Arizona.

NEWTON LIMITED IN PRACTICE; EXPECTED TO PLAY VS. SAINTS

CHARLOTTE (AP) — Cam Newton was limited to mostly light throwing during practice as the Panthers continue preparations for their game Sunday against the Saints.

Newton is expected to start.

Rivera says the Panthers want Newton to be out there to shake the rust off, “but what you don’t want to do is not give the arm a chance to rest.”

The coach says Newton “went through a surgery and we have to understand that rest is the best thing for him.”