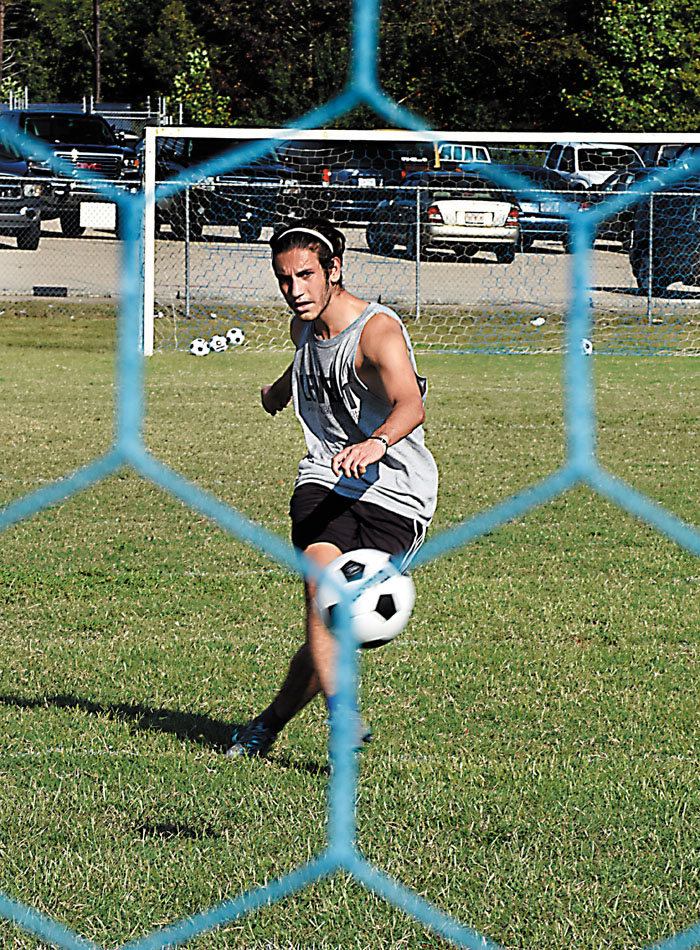 Wayne Hinshaw/for the Salisbury Post ... East Rowan soccer player Alex Kalogeromitros, during a recent practice. Kalogeromitros, or “Special K,” has 14 goals and six assists so far this season for the Mustangs.

GRANITE QUARRY — When you’re tagged with nicknames like “The Greek Freak” and “Special K,” it’s pretty hard to go unnoticed.

But for stylish East Rowan junior striker Alex Kalogeromitros, it’s his potential, confidence and goal-scoring ability that make him the county’s most eye-catching soccer player this season.

“Honestly, you just have to watch him,” Mustangs’ coach Brian Moffitt said, following a recent practice. “His soccer knowledge, the way he navigates downfield, the way he controls the ball — it’s all unreal. He is gifted.”

Kalogeromitros, who netted 14 goals and assisted on six others in East’s first nine matches, is less enthralled with himself.

“I just don’t like to waste chances,” he said with a warm smile. “When I get in position to score, I try to finish. I’m really clinical. I have a quick first step and feel like I can get by defenders easily. From there, it’s just a matter of finishing the chances I get.”

“Special K,” a third-year varsity player, has emerged as a shooting star for a team that could certainly use another. He’s had a hand in 20 of East’s first 21 goals — including four tallies in a 5-4 overtime loss at Davie County on Aug. 28. Two-and-a-half weeks later, he performed a brain-frying solo, scoring five times in a 7-3 win against the War Eagles — the Mustangs’ first victory in a month.

“We were winning the midfield battle,” he said. “And my teammates were finding me in space. So I took a few chances and finished them off.”

Moffitt thinks it all stems from speed and Kalogeromitros’ penchant for anticipating plays.

“He sees the field better than anyone I’ve ever coached,” Moffitt said. “It’s like he’s one step ahead of everyone else. He already knows where the ball is going to be and what he’s going to do, like two moves ahead of time. To watch it happen is special.”

It wasn’t always that way. Kalogeromitros comes from a soccer-playing family — brothers Nick and John preceded him at East and cousin Andrew is a Salisbury High graduate playing for Lenoir-Rhyne — so the spotlight was never his alone. He spends his summers in Greece, where his parents — owners of the Blue Bay restaurant chain — were born and raised.

“My friends always got me in a league over there,” he said. “I played with kids my own age and adults, so it was pretty good competition. You’re always learning, trying to get better.”

Kalogeromitros first drew Moffitt’s attention as a budding star at Erwin Middle School. “He dominated, even back then,” Moffitt said. “His eighth-grade year, we were one win away from the championship game and he carried us. His freshman year, I had him playing center-mid, but we weren’t scoring enough goals. So I moved him up and thought, ‘Let’s just see what happens.’ That’s where he’s been ever since.”

Kalogeromitros auditioned well as a ninth-grader, finishing with eight goals and four assists as a varsity player. Last year, he contributed 18 goals and 11 assists. And despite his statistical success this year, he’s remained uniquely grounded.

“He’s our centerpiece, our No. 1 guy,” senior teammate and co-captain Will Peeler said. “But you wouldn’t know it. He’s a playmaker, a creator — but doesn’t gloat about anything. Of course, the minute he’s on the field, he’s a different guy.”

Senior Will Garland agreed. “In school, he’s real quiet, never loud about his name,” he said. “But out here, he’s always a threat. If he has three feet of open space, he’ll make something out of it.”

Moffitt believes Kalogeromitros will play in college and perhaps beyond. “He just has to continue being Alex,” the coach said. “He’s got the talent, the mentality, the speed and the ball-control. He’s got all the qualities that make him a special player.”

And impossible to ignore.