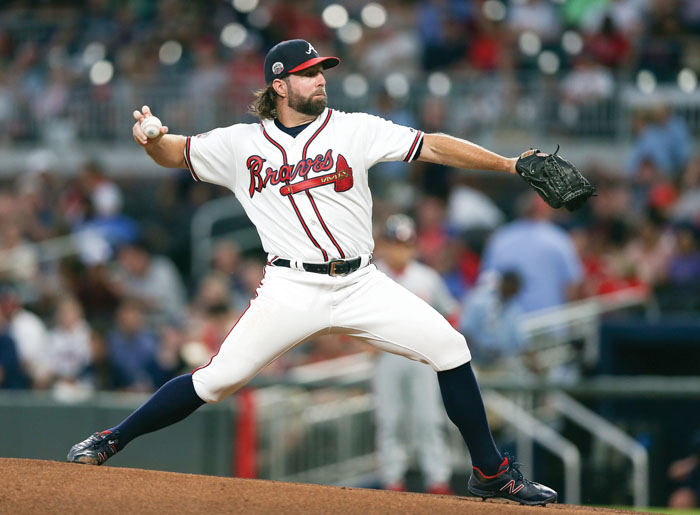 ATLANTA (AP) — R.A. Dickey isn’t sure he’ll be back with Atlanta in 2018, or even still pitching in the majors, so he took a minute to savor what he said could be the final home start of his career.

The 42-year-old’s knuckleball cooperated for a memorable night.

Dickey frustrated Washington with his knuckler for eight innings, Ozzie Albies had three hits and the Braves beat the Nationals 3-2 on Thursday night.

“I’d be lying to say I didn’t have some emotions about it,” Dickey said. “This could be my last start ever at a home venue. But we’re going to make that decision at the end of the season and see how I feel and what goes on there.”

Dickey (10-10) gave up two runs, four hits and no walks. He made a strong case that the Braves should pick up his $8 million club option for 2018, but Dickey must first decide to extend his career.

“I certainly feel I have a lot more in me, yes,” Dickey said.

“If I did not continue to play, it would be because our family decided it wasn’t the best thing. I’ve dragged my kids all over the world playing baseball for 21 years. You know, there comes a time they deserve their dad to be around.”

The win gave Dickey six straight seasons with double-digit wins. The streak began in 2012 when he was 20-6 and won the National League Cy Young Award with the Mets.

Braves manager Brian Snitker said he liked the matchup of Dickey against the Nationals.

“With that pitch, he can neutralize the best-hitting team in the National League,” Snitker said. “He was really good and efficient.”

After Ryan Zimmerman’s leadoff homer in the second inning, Dickey gave up only one hit — a two-out single by Trea Turner in the third — over the next five innings. Turner was picked off first base.

Zimmerman set a career high with his 34th homer, his fourth off Dickey this season.

The Braves scored two runs in the fourth off Tanner Roark (13-10).

Albies singled, moved to third on catcher Matt Wieters’ wild pickoff attempt and scored the go-ahead run on Freddie Freeman’s fly ball to deep left field. Nick Markakis doubled past Zimmerman at first base and scored on Johan Camargo’s single up the middle .

The Nationals trimmed the Braves’ lead to one in the eighth. Anthony Rendon doubled to left field and scored on Wieters’ two-out single.

The game was delayed several minutes in the middle of the eighth. There was confusion as Nationals manager Dusty Baker attempted to make several defensive changes and had to go over the moves with home plate umpire Nic Lentz, who also took questions from Snitker.

Nationals: Asked the plan for OF Bryce Harper, who has been out since Aug. 13 with a hyperextended left knee, Baker said: “Come back to work tomorrow.” Harper caught fly balls during batting practice after running the bases and hitting on Wednesday. Baker said Harper will hit again on Saturday in New York.

Braves: Ender Inciarte (sore left thumb) started for the first time since Sept. 12. C Tyler Flowers (hand) made his first start since being hit by a pitch on Sept. 13.

Roark allowed three runs and six hits in seven innings. He beat the Braves on Sept. 14 but couldn’t follow up with another win. “Facing these guys back-to-back when they are already a good hitting team, that’s a challenge in itself,” Roark said.

Arodys Vizcaino struck out the side in a perfect ninth for his 12th save in 15 chances. It was a strong return to form after Vizcaino walked all three batters he faced in a blown save Wednesday night.

Nationals: RHP Edwin Jackson (5-6, 4.96) will start Friday night’s opening game of a weekend series at the Mets. He has a 3.77 ERA in 12 career appearances, including seven starts, against New York.

Braves: LHP Sean Newcomb (3-8, 4.32) will start against Philadelphia’s Ben Lively as Atlanta opens its final home series of its first season at SunTrust Park. Newcomb has a 2.54 ERA in two starts against the Phillies this season.