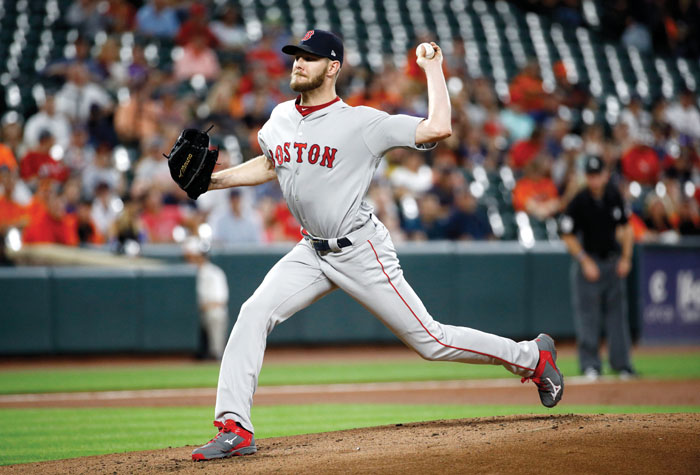 BALTIMORE (AP) — Chris Sale was at his very best — right down to his momentous last pitch — in another meaningful victory for the Boston Red Sox.

Sale struck out 13 to become the first AL pitcher in 18 years to reach the 300 mark, and Boston moved to the brink of clinching a playoff berth by beating the Baltimore Orioles 9-0 on Wednesday night.

Sale (17-7) reached the milestone on his 111th and final pitch, a called third strike against Ryan Flaherty to end the eighth inning. The last AL pitcher to fan 300 batters in a season was Boston’s Pedro Martinez in 1999, when he set a club record with 313.

Red Sox manager John Farrell sent Sale back out for the eighth inning to give him a shot at getting No. 300.

Thing is, the left-hander had no idea he was at 299 when the inning started.

“No, I didn’t,” Sale said. “I went out there and struck out the last guy and everyone started losing it. I knew I was close, but I didn’t know I needed just one more.”

Mookie Betts and Deven Marrero homered for the Red Sox, who reduced their magic number for reaching the postseason to one. If the Angels lost to Cleveland later Wednesday night, Boston would be assured no worse than a wild-card spot in the AL playoffs.

The Red Sox, of course, would prefer to enter as AL East champions. They hold a three-game lead over the second-place Yankees with 10 games left.

“Given where we are in the standings and what is at stake, every win is important,” Farrell said. “Just getting into the playoffs is not our goal.”

After winning two straight 11-inning games over the skidding Orioles, Boston jumped to a 6-0 lead in the fifth and coasted to its 11th win in 14 games.

Betts and Marrero hit two-run homers in the fourth against Wade Miley (8-14) and Hanley Ramirez added a two-run double in the fifth.

Sale allowed four hits and walked none in matching his career high for wins.

“A dominant performance after a year that has been a dominant one,” Farrell said.

Sale reached double figures in strikeouts for the 18th time this season. He is the 14th pitcher in the so-called Live Ball Era (1920-present) to ring up 300 strikeouts in a season.

Jeter always will be remembered for leading the Yankees to five World Series championships. In his third season as Jeter’s replacement, Sir Didi surpassed his predecessor for the most home runs by a Yankees shortstop in a season.

The Yankees, who have won 10 of 12, remained three games behind AL East-leading Boston, which blanked Baltimore 9-0. They opened a seven-game advantage over the Twins for the top AL wild card with 10 games remaining.

A record 13 different Kansas City players had at least one hit as the Royals collected 18 in total.

Moustakas went 3 for 4 and came within a triple of hitting for the cycle. He eclipsed “Bye Bye” Balboni’s mark with a solo blast to right off Carlos Ramirez in the sixth, his first homer since Sept. 1 at Minnesota.

“It was a good feeling to see it go over the wall and kind of get that one off my chest,” Moustakas said.

Just as good was the reception Moustakas got when he returned to the Royals dugout.

“It was pretty special to be able to hit that and then come in and share that with all my teammates, all the guys I’ve spent 10-plus years with,” Moustakas said. “It’s definitely an awesome feeling and something I’m going to remember for the rest of my life.”

“It’s been 32 years, I think, if my math is right,” Yost said. “That means that there obviously has been some major degree of difficulty in doing it.”

Merrifield also had three hits and drove in a pair of runs as the Royals snapped a three-game losing streak and won for the second time in their past seven.

Kansas City came within a run of matching its season high. The Royals scored 16 against Detroit twice within a seven-day span in late July.

Toronto has allowed 15 or more runs four times this season, matching their total from the previous six seasons combined.

“We were able to get some good runs early for him, like we’re supposed to, and he did the rest,” Moustakas said

Anderson (3-4) left his previous start at Minnesota in the fifth after being bothered by a blister on his index finger. Against the Royals, he allowed eight runs and seven hits in 1 1/3 innings. Anderson was caught by TV cameras ripping his cap apart as he sat in the dugout after coming out of the game.

“I think there’s parts of it left in the dugout if you guys want some souvenirs,” Anderson quipped.

Kansas City added four more against Ramirez in the sixth, snapping the rookie’s streak of 47 2/3 scoreless innings in the minors and majors. A converted outfielder, Ramirez had pitched 10 shutout innings to begin his big league career.

Merrifield ended the streak with a leadoff homer, his 18th, Cabrera hit an RBI double, Perez drove in a run with a groundout and Moustakas added a two-out homer.

Raffy Lopez homered in the ninth for the Blue Jays.

With a crowd of 33,050, the Blue Jays became the first AL team to break the 3 million mark in attendance this season. It’s the second year in a row and seventh time overall that Toronto has drawn 3 million.