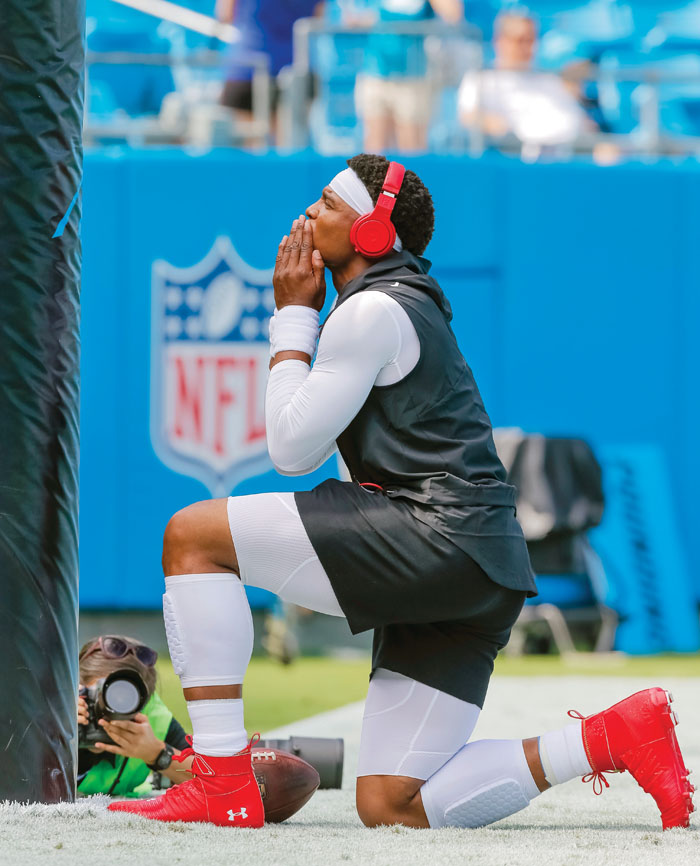 FILE - In this Sept. 17, 2017, file photo, Carolina Panthers' Cam Newton finishes a prayer before an NFL football game between against the Buffalo Bills in Charlotte, N.C. The Panthers defense has been dominant in the first two weeks of the season, but Cam Newton and the offense know they're going to have to start completing drives and scoring touchdowns instead of field goals. (AP Photo/Bob Leverone, File)

CHARLOTTE (AP) — The Panthers’ defense is doing its part.

Now quarterback Cam Newton and offense hopes to start pulling its weight as Carolina prepares to host the New Orleans Saints on Sunday.

“We’ve got to score touchdowns,” Newton said. “You don’t need no football manual to know that. We have to do our job. And I believe we will.”

On the bright side, the Panthers are 2-0 largely behind the play of the NFL’s top-ranked defense, which limited both San Francisco and Buffalo to three points.

The Panthers will look to increase scoring production without one of their best red zone producers in tight end Greg Olsen, who was placed on injured reserve Tuesday with a broken foot.

Olsen is eligible to return to action Nov. 26.

For now the Panthers will lean more heavily on backup tight end Ed Dickson, who hasn’t been a big part of the Carolina passing game in recent years but caught 54 passes for the Baltimore Ravens in 2011.

Dickson has been on some pretty good defensive-led teams in Baltimore, but said this Carolina defense is “scary.”

“As an offense we have to do what we can to help them out,” Dickson said.

If there is ever a week for the Panthers to get back on track it could be this one. The Saints rank last in the league in defense and surrendered 36 points to the New England Patriots last week.

Dickson believes the Panthers have been very close to blowing games wide open but just missed on a few plays.

In the season opener Newton overthrew Dickson, who was running wide open in the secondary in what would have been an easy TD. Newton overthrew Christian McCaffrey for another potential score against Buffalo and a Bills defender dislodged the ball from Kelvin Benjamin’s chest with a vicious hit in the end zone to prevent another touchdown.

“If we score another two touchdowns it’s a blowout and we’re talking about something else,” Dickson said. “So we can’t panic. We just have to complete some of those plays. We will. We are still growing as an offense.”

“We’ve been in position to score and Cam has made the right decisions and made the right reads,” Rivera said. “Now it’s just a matter of getting your rhythm, getting yourself in tune and putting the ball on the spot where it needs to be.”

Part of the problem last week was pass protection.

The Panthers were without two-time All-Pro center Ryan Kalil who missed the game with neck soreness, and his younger brother Matt Kalil struggled at left tackle.

The younger Kalil allowed blockers around the edge, not used to the deep drops that Newton regularly takes in the pocket. In essence, Kalil was leading the pass rusher right into Newton rather than directing him around the QB.

Newton was sacked times, although not all were on Kalil.

Rivera said Kalil, who joined the team this year as a free agent, will learn from that the more he plays with Newton.

LEWIS TO WINLESS BENGALS: NEXT JOB LOST WILL BE YOURS

CINCINNATI (AP) — Coach Marvin Lewis warned Bengals players that more changes are coming if they continue to lose, and the next job lost could be theirs.

The Bengals fired offensive coordinator Ken Zampese a day after their 13-9 loss to the Texans on Thursday night. Quarterbacks coach Bill Lazor was promoted and will get his first chance to put his imprint on the offense for a game Sunday at Green Bay (1-1).

Lewis said his message to the team this week is that it’s on them now to fix the problems.

“I told the players on Monday morning: This is not magic,” Lewis said Wednesday, the first time he’s been available to the media since the change. “You have to do the work — offense, defense and special teams all alike. We all got Kenny out of here — not Kenny, we did.

“And they’ve got to understand that. They’re part of that. And the next time they look around, there will be different guys sitting there.”

The Bengals (0-2) are the first team since the 1939 Eagles to open a season with a pair of home games and fail to score a touchdown. They have scored an NFL-low nine points this season. The previous team to score so few points in a pair of season-opening home games was the 1949 Packers.

Lewis is in his 15th season with Cincinnati and is in the final year of his contract, leaving him vulnerable if things don’t turn around. Owner Mike Brown is reluctant to change coaches during a season. Firing Zampese went against the norm.

Zampese was a focal point in his second season as coordinator. The offense never got into a flow, A.J. Green and Tyler Eifert would go long stretches without a pass thrown their way, and the play calling lacked the creativity shown under Zampese’s predecessor, Hue Jackson.

After the loss to Houston, Green said they need to get the ball in their star players’ hands more often, even when they’re a focal point of the coverage. Lewis agreed, which was one factor in the change at coordinator.

“He plays a position where sometimes it’s a little harder (to get him the ball), so we’ve got to be creative to provide opportunity to do that,” Lewis said.

Lazor declined interviews after practice on Wednesday, saying he had a meeting to attend. One of his priorities will be getting Andy Dalton back into a flow. He was sacked five times during an opening 20-0 loss to the Ravens and three more times by the Texans, who had him on the run repeatedly.

Dalton led the AFC with a passer rating of 106.3 in 2015. He slipped last season, when he was sacked 41 times. His passer rating after two games is 47.2, last in the NFL. Cleveland rookie DeShone Kizer is second-to-last at 55.6.

Dalton said Lazor has done some things differently during practice. The test of how much they’ve changed will come Sunday when Lazor is running the show.

“You don’t know until you get into it and plays are actually being called,” Dalton said.

Most of the changes will be in picking plays for certain situations rather than making wholesale changes to the playbook.

“You can’t come into this and completely change what we’ve been doing,” Dalton said “You can’t change everything in just a couple days.”

Eifert wasn’t on the field for practice Wednesday, getting treatment for a sore back. He missed time last season with a bad back, and was stretching his lower back during the game on Thursday.

Offensive tackles Jake Fisher and Cedric Ogbuehi didn’t make it through the full practice because of illness. Rookie receiver John Ross got sick, too. Defensive tackle Geno Atkins was limited by a shoulder injury. Defensive end Michael Johnson was limited as he recovers from a concussion that sidelined him for the game against the Texans.