Kahne to stay in NASCAR next year 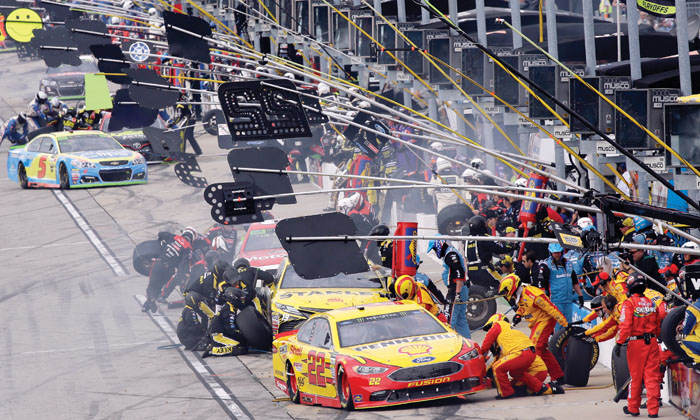 CHARLOTTE (AP) — Kasey Kahne will stay in NASCAR next season and drive for Leavine Family Racing in the No. 95 Chevrolet Camaro.

He will replace Michael McDowell, who has driven that car since 2014.

The announcement Tuesday was not unexpected, but Kahne last week revealed he’d given consideration to piecing together a dream schedule of big races in different series. Although he stressed his first goal was to remain in NASCAR, his idea led at least one IndyCar owner to inquire about Kahne’s availability for the Indianapolis 500.

Instead, he will move to a mid-level race team that is trying to move up the ladder.

“We look at this as an opportunity to go to the next level,” said team owner Bob Leavine. “This deals partially with performance, because obviously, Kasey is a playoff-caliber driver. He has a wealth of information being with a larger organization like Hendrick Motorsports, and we think that will help us. We also look at this as an opportunity for marketing to be able to sell sponsorship.”

Leavine will continue his alliance next year with Richard Childress Racing.

Kahne has been with Hendrick Motorsports since 2012, but the team bought him out of his contract for next season. He became a free agent shortly after his win at Indianapolis Motor Speedway in July earned him a spot in the playoffs.  Kahne had a rough opening round to the playoffs  at Chicagoland, where he finished 21st and is 15th in the 16-driver field. Kahne’s crew chief was replaced on Monday.

CHARLOTTE (AP) — Chase Elliott suffered a setback to his championship hopes when NASCAR penalized his Hendrick Motorsports team Tuesday for a modification to his Chevrolet in the opening round of the playoffs.

The aerodynamic modification was found in post-race inspection following Elliott’s second-place finish on Sunday at Chicagoland. The finish is now considered “encumbered” by NASCAR and Elliott does not keep a playoff point he earned with a stage victory at Chicagoland.

The loss in driver points dropped Elliott from sixth place to eighth place in the postseason standings. There are two races remaining in the opening round of the playoffs.

Hendrick Motorsports said it won’t appeal the penalty and Kenny Francis will step in for Gustafson this weekend at New Hampshire.

The issue with Elliott’s car surrounded a piece of tape applied to the rear spoiler in what other teams believed was an effort to gain more downforce. Photos and videos were presented to NASCAR that appeared to not only show the tape, but also a crew member removing the tape following the race.

TRACK TO RETIRE NUMBER OF DRIVER KILLED IN PLANE CRASH

STAFFORD SPRINGS, Conn. (AP) — A Connecticut race track is retiring the number of a NASCAR driver who died in a plane crash.

Stafford Speedway announced that Ted Christopher’s No. 13 will be retired in a ceremony during Friday’s races.

The 59-year-old Christopher was a passenger on a plane that crashed in North Branford on Saturday. The pilot, 81-year-old Charles Dundas, also died.

Stafford Speedway General Manager Mark Arute called Christopher “a fixture” at the track. His first start at Stafford was in May 1983, his first win was in 1986, and his last was Sept. 8.