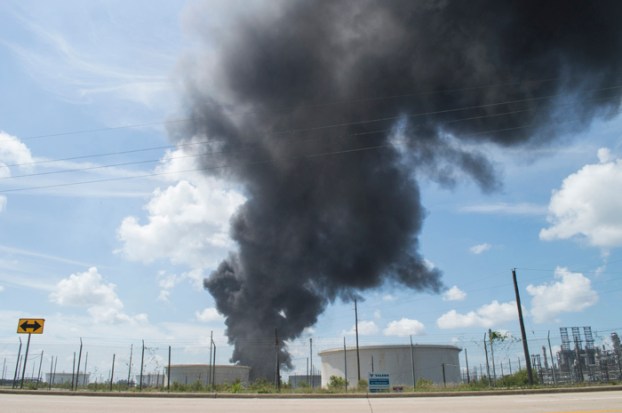 PORT ARTHUR, Texas — When the oil refinery began roaring like a jet engine, that’s when I finally decided it was time to retreat several hundred yards.

The man standing next to me — John Beard — identified himself as an industrial firefighter and said the roaring noise meant the plant was depressurizing itself to prevent a raging crude oil tank fire from getting worse. Still, the noise combined with a towering black plume of smoke was worrisome.

I retreated about 300 yards behind a row of trees and orange cones to watch the fire unfold for a few more minutes.

The black smoke soon turned white, indicating the blaze was under control. It seemed the roaring noise decreased in volume. Content with the information I had gathered, I left the scene.

Much is still unclear about the fire, including how it started, but there were no reported injuries. Witnesses said an explosion preceded it. The black plume of smoke towered over Port Arthur for about an hour before firefighters got it under control.

Meanwhile, the fire was a story unlike any I have ever covered before.

In the aftermath of Hurricane Harvey, there are ample stories to tell in Port Arthur. The storm drenched the region in rain. Floodwaters ruined neighborhoods and altered lives. Roadsides are littered with mounds of debris ripped from inside homes.

On Tuesday, I traveled to a dump site for household debris. A community activist was reportedly engaged in a standoff with city officials about closing the site. When I arrived, the standoff had ended. Workers at the site asked me to leave.

While traveling back to the hotel room being used as an office by the Port Arthur News staff, however, I received a call indicating a fire had started at one of Port Arthur’s refineries. Smoke visible from miles away towered over the refinery.

On the road adjacent to the Valero refinery, cars slowed down for a glimpse of the fire. Many snapped photos of the huge plume of smoke. People pulled over on the side of the road, too.

Police officers briefly blocked off roads near the refinery. A “shelter in place” order was issued for a period of time.

It’s hard to put the size of the towering black smoke into words. As the fire continued, the plume seemed to grow wider. Onlookers said several pieces of insulation on the ground came from the fire.

Some nearby residents said such fires are not entirely uncommon for an area with multiple oil refineries. Still, better measures should be put in place to protect nearby residents in the event of a massive fire.

Beard suggested that the company purchase many of the houses closest to the plant to prevent people from inhaling smoke from a fire.

Another man, Harvey Gordon, said there is no good safety system to protect nearby residents. He said houses closest to the plant should have been evacuated.

The fire lasted multiple hours and released an unknown amount of particulate matter into the skies. I stood on the roadside for about 40 minutes before retreating behind some trees.

Although it was a unique experience, it’s something I’d prefer to avoid in the future.

My Turn, Vickey St. Lawrence: Here’s what I saw at school

After reading the results of the test scores in the Rowan-Salisbury School System last week I, like so many others,... read more