Catawba’s first theatrical production of the season: ‘The Conference of the Birds’ 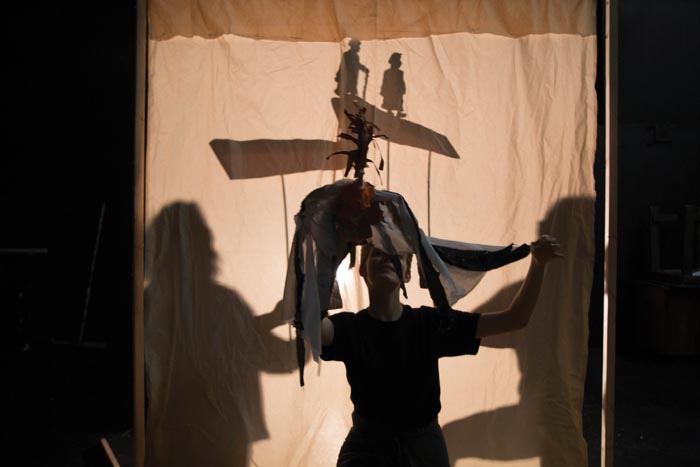 Catawba Theatre's Conference of the Birds. Photo by David Pulliam.

Catawba Theatre Arts presents the first-year showcase and first production of the season, “The Conference of the Birds,” at 7:30 p.m. Sept. 22-30 in Florence Busby Corriher Theatre on campus.

Directed by Craig Kolkebeck and choreographed by Meredith Fox, both professors in Catawba’s Theatre Arts Department, “The Conference of the Birds” is a play by Peter Brook based on a 12th century Sufi poem by Faridud-Din Attar and considered to be a literary masterpiece. Kolkebeck and Fox’s adaptation tells this mythical story through traditional and non-traditional styles of theatre including dance, puppetry and shadow play.

Theatre-goers are invited to join a group of majestic birds as they embark upon a quest to find their leader, Simorgh. The flock must travel through vast lands and deserts filled with riddles, and not all of them will reach their destination with ease. With the guidance of their leader, Hoopoe, they each work to overcome their obstacles in hopes of reaching the dwelling place of Simorgh and achieving enlightenment.

Kolkebeck said he is focused on achieving a simplistic nature for each bird and showing how each bird must find the truth that is within themselves. His vision is to convey man’s search for meaning through the eyes of each bird.

“They shed pre-existing knowledge and beliefs, and challenge their own shortcomings while forging ahead through adversity and doubt in order to find God.” Kolkebeck explained.

He spoke of the challenges they have encountered using the art of puppets and shadow play in the production while guiding the student cast to understand the complex text.

“The use of puppets has been an interesting bridge to cross,” Kolkebeck shared. “The transference of acting technique into an inanimate object in order to bring it to life has been a challenging task.”

Challenges in the movement portion of the production demanded significant research for choreographer Fox.

“This text is heavily influenced by Sufism and mysticism, which are topics that I have not had much experience exploring,” she explained. “I’ve researched these areas and made connections to other spiritual practices that are more familiar to me in ways that will progress movement within the piece.”

Fox emphasized how this story is told through movement in more abstract ways than those used in a typical narrative that moves in a more linear fashion. “I wanted to ensure that we create movement unique to our production, the actors, and the space and how concept relates to where the birds and character are in their journeys.”

Fox said her choreographic vision is not necessarily consistent for the entire production, but rather offers a line of sight for each piece within the play to help physically evolve the story that unfolds.

Members of the creative team in addition to Kolkebeck and Fox include Christopher Zink as lighting designer, David Pulliam as scenic designer, Erin Dougherty as costumer designer, and Karissa Carpenter of Ramseur as stage manager.

“The Conference of the Birds” performances run at 7:30 p.m. each evening Sept. 22-30 in the Florence Busby Corriher Theatre, down the hill from the Robertson College-Community Center. Tickets are $15 for adults, $10 for non-Catawba students and senior adults, and free for Catawba College students, faculty and staff. Purchase at www.catawba.edu/theatretix

Generations collide with ‘Mothers and Sons’ at Lee Street…