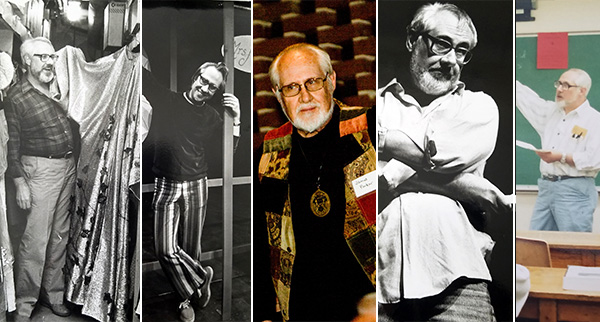 Parker retired from the theater arts department in 2003 after 33 years of service. He was the department’s costume designer for most of his tenure, while also teaching many of its technical theater courses.

As a director, he mounted 14 Shakespearean productions, nine of those at Catawba. He adapted plays, taught performance and literature classes, and acted on stage.

His last production at Catawba was Shakespeare’s “Pericles,” one he directed while also playing the character of Old Gower, the play’s narrator. He said at the time that he selected that play as his swan song because it is a fairy tale for grown-ups and had never been staged at Catawba.

He was awarded Catawba’s Swink Award for Outstanding Classroom Teaching in 1978 and was inducted into the inaugural class of the college’s Blue Masque Hall of Fame in 2007.

After graduating from Ithaca College in 1954, he went on to do some off-Broadway shows in the mid-1950s.

He met his late wife, Betty, at the Boothbay Playhouse in Maine doing summer stock in 1959. She was a member of the company and Parker was a designer. They were married that fall and their only child, Deirdre, was born in 1961. He earned his master of fine arts degree from UNC Greensboro and joined the faculty at Catawba in 1970.

Known for his frugality in Catawba’s theater department, he earned a reputation as the school’s costume guru who could make something out of nothing. Patchwork became a signature style for him, and he could often be seen wearing patchwork clothing of his own creation.

As a director, he encouraged experimentation and was known to be remarkably candid with his students. He was also known for his characteristic wry wit.

Parker is survived by his daughter, Deirdre Parker Smith, and her husband, Steve Smith.

A memorial service for Parker will be held at 2 p.m. Sunday in Hedrick Little Theatre of the Robertson College-Community Center on Catawba’s campus. Friends and colleagues are invited.