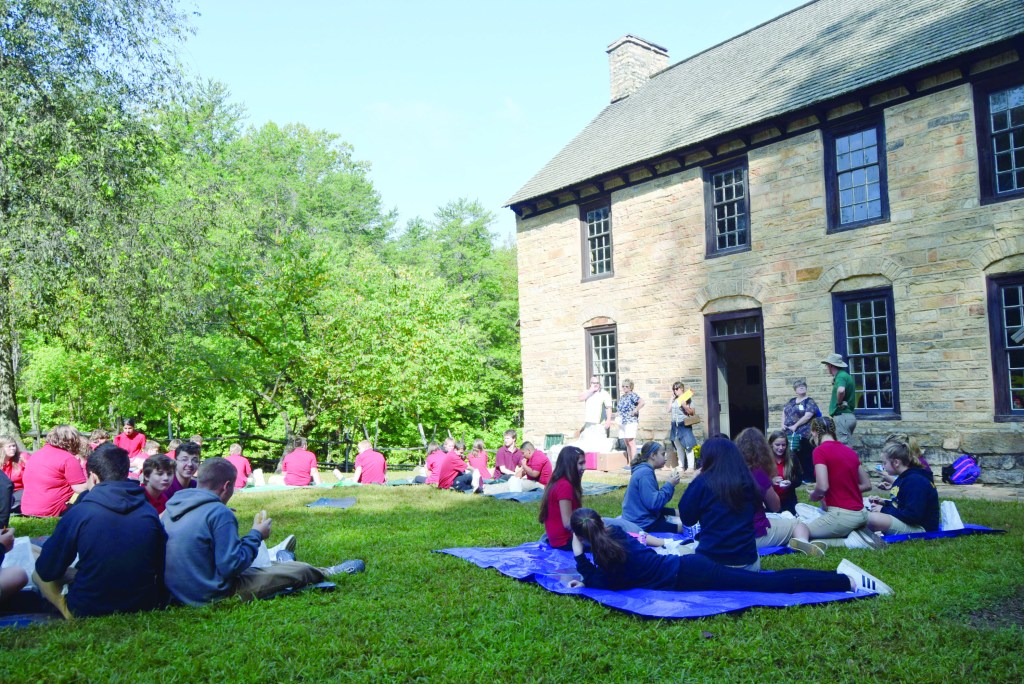 A recent partnership between the Rowan Museum and Horizons Unlimited means that Rowan-Salisbury school groups are returning to the Old Stone House for the first time in nearly five years. Rebecca Rider/Salisbury Post

GRANITE QUARRY — The morning is quiet and clear when Terry Holt takes a group of eighth-graders into the woods near Old Stone House. He asks them what they see, gesturing broadly to take in a clearing full of saplings and debris. The students respond: rocks, trees, cut stone, old boards. They are the answers he’s looking for.

Holt’s short lesson in archaeology is one of six that the students would go through Tuesday at Old Stone House, a historic home and property built by the Braun family in 1766. While one group looks about the search for the old barn with Holt, another studies the effects of acid rain and weathering on gravestones with Horizon’s Unlimited teacher Kyle Whisenant.

Others make hard tack in the outdoor oven with Rowan Museum Executive Director Aaron Kepley or test water in the creek with planetarium director Neil Pifer.

According to Kepley, it’s the first time a Rowan-Salisbury Schools group has visited the property since 2012. But that doesn’t mean the students are starting small.

“This is probably one of the most ambitious school projects we’ve ever done,” Kepley said.

Born of a partnership between Horizons Unlimited and the Rowan Museum, the project, over a roughly monthlong period, will bring every eighth-grader in Rowan County — roughly 100 students per day — to Old Stone House.

The students spend all day at the property, conducting science experiments while they learn about local history and Colonial life.

“This meets our mission perfectly,” Kepley said. “And we’re using the Old Stone House in a way it’s never been used before.”

As far as Rowan Museum and Horizons Unlimited officials are aware, this is the first time the two have formed such a partnership.

The days are designed specifically for eighth-graders, Whisenant said, because they can be some of the hardest to teach for Horizons. By the time a student has reached eighth-grade in Rowan-Salisbury Schools, he has been to Horizons multiple times and experienced most of the activities the facility offers. So it’s harder to get the engaged.

But the Old Stone House days change that and bring classroom lessons — especially those on social studies — to life.

“They get to see that this stuff actually does happen in real life,” Whisenant said. “… I think it helps them understand where we’ve come from.”

Since the school system discontinued school-sanctioned field trips to Old Stone House in 2012, it’s the first time many students have been there. So in addition to a fun day out of school, students are also experiencing a local historical treasure. Whisenant and Kepley said they hope it will help students realize that there are a lot of things to be proud of in Rowan County.

On Tuesday, eight-graders from Corriher-Lipe Middle School were abuzz about things they loved about the day. Some liked the archaeology lesson; others liked learning about Colonial nutrition and seeing the house garden. Others enjoyed scooping water from the creek.

But for some, it was the hosue itself. Student Holley Braey said her favorite thing about the day was seeing what was inside.

“I just like the history of it,” she said, looking toward the house.