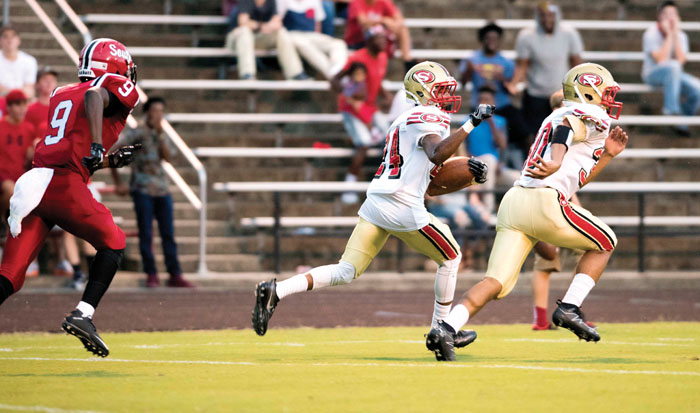 JON C. LAKEY / SALISBURY POST Tyvion Wood (24) returns an interception against South Rowan, also in 2016, as teammate Nick Austin, right, looks to block. Wood has picked right up where he left off and earned Friday Night Hero honors for his play last week in a win over West Davidson.

As a senior, he’s building toward a big finish. Still no picks after four games, but there have been a lot of breakups, a lot of tackles and a lot of smart decisions.

Salisbury’s overall defense has been stout since faltering in the second half on opening night against North Rowan. Hinson expected his DBs to be one of the team’s strongest areas, and they have been. Admittedly they haven’t been facing pass-happy teams, but the Hornets (3-1, 2-0 Central Carolina Conference) have allowed just 80 total passing yards — 26, 46 and 8 — in their last three games.

Salisbury leads the county by a lot in passing defense, scoring defense and total defense (yards allowed). Salisbury didn’t allow a point against Thomasville while it still mattered and destroyed West Davidson, 46-0, in a running-clock game last Friday. Shutouts are scarce these days. That was the first one for Salisbury’s defense since 2015 and only the second in the last six seasons.

“Well, we knew West Davidson wasn’t going to throw it,” Wood said. “We went into the game focused on stopping the run, and we knew we could do that as long as we were in the right places.”

West Davidson ran twice as many plays as the Hornets, but the Green Dragons gained less than 2 yards per snap.

High school defensive football is changing and evolving, figuring out ways to deal with the problems caused by the increasing number of passes and the increasing number of dual-threat QBs. Part of the solution is players such as Wood. Wood is no longer a pure cornerback. Now he’s a hybrid, a cornerback/safety whose role in the game plan depends on the style of offense the opponent uses. Salisbury prefers to play Wood at safety, getting him in the middle of the field more, where he can make sure that his teammates are in the right spots.

“Thomasville had athletic receivers, so we put Tyvion on the one we thought was their best, and he shut him out.” Hinson said. “Against West Davidson, we used Tyvion as a downhill  safety, as another tackler to stop the run game. He’s versatile, and he’s not afraid to tackle people.”

Wood believes his best game this season was against Carson. Carson is an option team, so the Hornets moved Wood close to the line of scrimmage as a run-stopper.

“We’d put in some changes that week to play against Carson’s option, and then we went out and executed,” Wood said. “That was my season high for tackles. I’m not that big (160 pounds), but I can get low and I can get people on the ground.”

Besides being fearless, Wood is swift. He’s not crazy-fast like receiver Tyrone Johnson or super-fast like receiver/DB Trell Baker, but  he’s probably the third-fastest guy in the school. He’s the best jumper in the school, and he’s proven that in track and field. Whether its high jumps, long jumps, triple jumps or box jumps, Wood has a lot of spring. He has decent height (5-foot-11) and he’s comfortable in the air contesting taller receivers.

“He’s heady, he’s got length, and he’s another coach on the field,” Salisbury defensive coordinator Mike Herndon summed up. “He makes us better.”

Wood’s speed and enjoyment of contact also have made him one of the county’s better special teams players. He’s on all of them. He enjoys kickoff coverage and kickoff returns the most.

Wood is determined to make the most of his senior season, which got started early with a serious weight room upgrade in the offseason.

Things will get serious for the Hornets on Friday at Lexington (2-1). Lexington QB Saafir Craven is a normal-sized guy with dimensions similar to Wood’s, but against North Rowan, Craven wasn’t normal. He threw for 273 yards while rushing for 189. Wood knows Craven well. They were track and field rivals in the triple jump and long jump last spring.

Salisbury has started 3-1 for the first time since 2011, but Lexington also believes it has the best team it’s had in years.

“They can match us in speed,” Wood said. “They’ll be the fastest team we’ve played.”