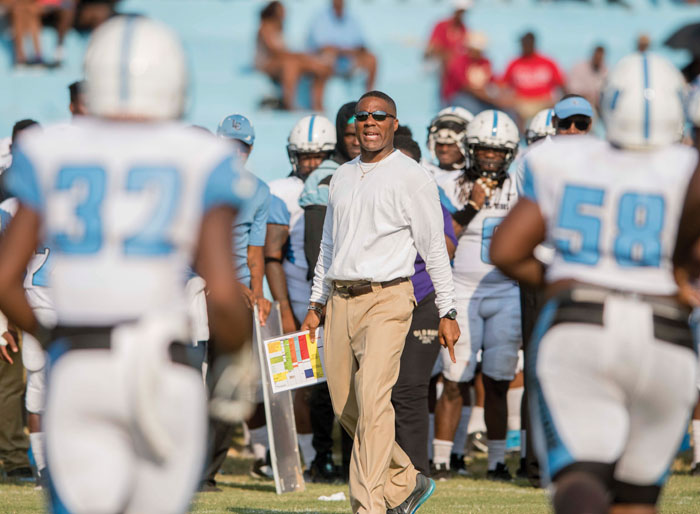 That sums up how Livingstone head football coach Daryl Williams feels, as the Blue Bears finally head into CIAA games.

Not that Chowan this week and Virginia State in the home opener on Sept. 30 won’t be tough games, but Williams is just happy to see the tougher-than-usual non-conference schedule come to an end.

“It’s all about the CIAA now,” said Williams on Monday. “We’ve played stiff competition and that’s been getting us ready for conference play.”

Last Saturday’s stiff test for Livingstone was against FCS Division I Hampton, and while a 59-0 loss doesn’t sound good, Williams said that the team actually benefitted in more ways than people would think.

“For the most part, I was pleased with our execution … we just happened to be playing a superior opponent,” said Williams. “I was excited because what we worked on all week, we got done on Saturday — we got the penalties down, solidified the pass protection and some things on the defensive side of the ball as well, like our blitz package.

“I was pleased with the way we fought and the fact that we stayed together as a team,” continued Williams. “But there is no secret what it was all about. We got a nice payday for going over to Hampton.”

Quarterback Xavier Longerbeam, a sophomore who started seven games last year and the season opener at Benedict on Sept. 2, returned after sitting out a week with concussion protocol.

“Longerbeam came on in the second half and marched us down the field,” added Williams. “Longerbeam played well and is the QB as long as he’s healthy. We’re not juggling quarterbacks.”

Another sophomore, Thaddeus Bell, had come into the opener at Benedict when Longerbeam was injured. Bell started and played the entire second game, a 33-13 loss at Kentucky Wesleyan.

Longerbeam completed seven of 11 passes against Hampton for 45 yards in the second half, after Bell went 5-for-17 against the bigger, faster Pirates.

Hampton raced out to a 35-0 halftime lead and it was 49-0 after three quarters.

“You want guys to play every week, but it is more important to have your key players down the stretch, if possible,” said Williams. “I feel good that it’s working out this way. We’re getting healthier at the right time.”

Livingstone has been using a lot of different running backs, including newcomer Art’kevious Nelson and Salisbury’s own Justin Ruffin. But Williams said that Richardson, a senior in his third year for the Blue Bears, is the guy.

“Jarius is definitely our starting tailback, when he’s healthy,” said Williams. “He makes us go.”

Richardson rushed for 749 yards and eight touchdowns last season, but so far in 2017, has but 95 yards and no scores in his two games.

Chowan came to Salisbury last September and whipped the Blue Bears, 41-13. But quarterback Randall Dixon, who threw for 372 yards that day, has graduated, as has his top receiver, Ryan Nolan.

The Hawks now have Bryce Witt at quarterback — and he does average 272 yards passing per game.

But Williams says his team is up for the challenge, any challenge, after the non-conference games.

“Even though we’re 0-3, we haven’t played a conference game,” added Williams. “Therefore, our goals are still intact. The guys absolutely understand that.

“We’ve got to get the snowball rolling in the right direction for this team,” continued Williams, in his fifth season at Livingstone. “This week is almost like a first game all over again. Hopefully, we’ve learned from our mistakes and we’re due for a complete game.”