Duke brings the No. 1 run defense into UNC game 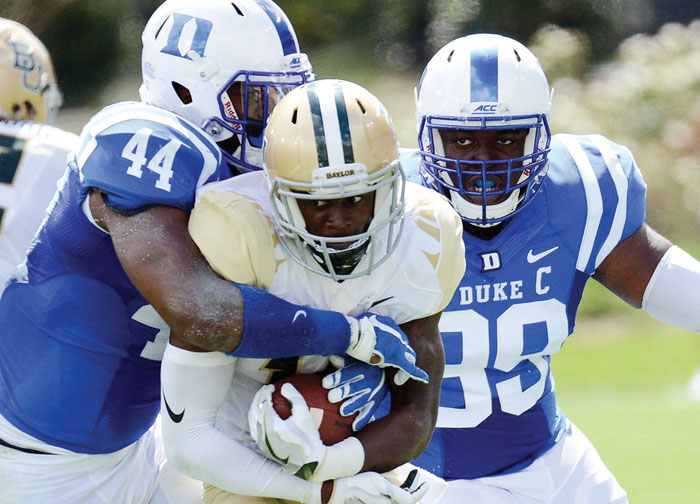 FILE - In this Saturday , Sept. 16, 2017, file photo, Baylor's Chris Platt, center, battles Duke's Joe Giles-Harris (44) and Mike Ramsey, right, for yardage during an NCAA college football game in Durham, N.C. The Blue Devils have the best defense against the run in the Bowl Subdivision, allowing just 47.7 yards on the ground per game heading into this week’s rivalry game with North Carolina. (Bernard Thomas/The Herald-Sun via AP, File)

The Blue Devils have the best defense against the run in the Bowl Subdivision, allowing just 47.7 yards on the ground per game heading into this week’s rivalry game with North Carolina.

They rank seventh in the nation in total defense at 223 yards per game and their opponents have converted just 12 percent of their third downs — second-best in the FBS.

Those are major reasons why they’re off to just their second 3-0 start since 1994.

“They’re playing enthused, they’re playing with a lot of energy and they’re having a lot of fun,” cornerback Bryon Fields Jr. said Tuesday. “And any time you’re doing that, anytime you have (defensive) linemen making plays, secondary covering guys up, linebackers running sideline to sideline, and guys are having fun and guys are bonding, and really some good relationships built between the players and between players and coaches.

“Any time you have that, you’re going to have something special,” he added. “We just hope to keep that going.”

UNC coach Larry Fedora expects “a lot of pressure, a lot of movement up front” from the Duke defensive line, praising their aggressive zone defense for making it difficult to both run and pass.

“They’re getting after it pretty good,” Fedora said.

They make it tough on Duke’s offense twice a week when the offensive and defensive starters go against each other. Right guard Zach Harmon says he usually lines up across from tackle Mike Ramsay — the Atlantic Coast Conference’s defensive lineman of the week after he had five tackles, including 2½ for a loss in the Baylor win.

“I don’t think I’ll see a better (defensive) lineman than him this year. He prepares me like no one else can,” Harmon said. “It’s tough. … They give us a great look, and when we do have that success, it means that much more to us, especially now, we know how great our defense is and will continue to be.”

None of them have rushed for anything close to 100 yards — as a team.

The Blue Devils opened by allowing 49 yards on the ground to FCS North Carolina Central and followed that by holding Northwestern to 22 yards rushing — the worst day for the Wildcats since they had minus-9 yards against Michigan in 2014. Running back Justin Jackson had the worst day of his career against them, finishing with just 18 yards rushing.

Next up is a North Carolina team that hopes its ground game is on, well, solid ground after losing its top two running backs from last year.

The Tar Heels, who had 17 yards rushing two weeks ago in a loss to Louisville, rolled up 254 yards and six rushing touchdowns — their most since 2015 — in a 53-23 rout of Old Dominion . Jordon Brown had 123 yards rushing and two scores while Michael Carter added two TDs in that game.

Time for tour to add more sizzle to FedEx…