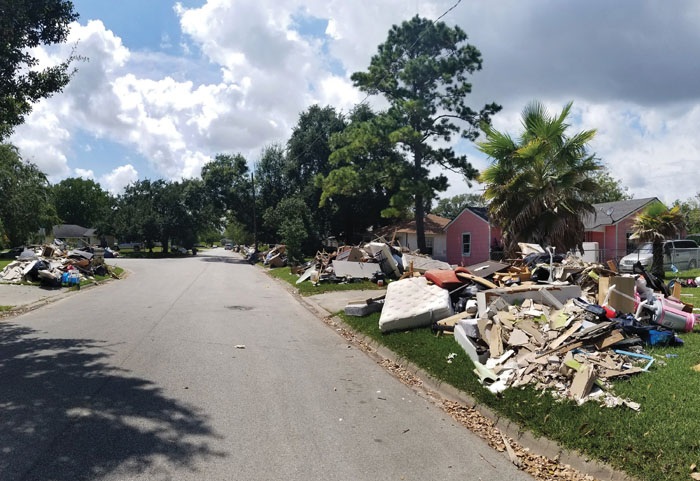 Debris on Monday sits on the side of roads in residential neighborhoods in Port Arthur, Texas. Although debris pickup had started, many houses and businesses still hadn't seen debris pulled from the inside of their home carted away yet. Josh Bergeron / Salisbury Post

PORT ARTHUR, Texas — Weeks after the storm and out of the national spotlight, this Texas oil city is still reeling from Hurricane Harvey.

With a population of more than 50,000, Port Arthur saw massive flooding as a result of the hurricane. More than 50 inches of rain reportedly inundated the area. The local newspaper — The Port Arthur News — reported last week that 85 percent of the structures in town saw flooding. The nation’s largest oil refinery, located in Port Arthur, closed because of the hurricane.

Pictures don’t adequately show the scale of Hurricane Harvey’s devastation, and the impact on local residents can’t truly be realized with a few conversations. The storm fundamentally changed the lives of Port Arthur’s residents.

With some knowledge about the storm’s effects on Port Arthur, I flew into town on Sunday to help a sister newspaper of the Salisbury Post report on the recovery from the storm.

That newspaper — The Port Arthur News — saw its offices flooded. A large heap of debris piled outside its offices shows as much. Now, staff members work from a hotel or wherever they can.

With homes still damaged, other local residents have taken up residence in hotels, too. The Comfort Inn and Suites, where I’m staying, doesn’t have any vacancies and likely won’t for a long time. As I started my day Monday, I overheard the front desk clerk advising someone to call back the next day to see if a room opened up.

Making matters worse, a couple of hotels in the city have been forced to renovate all their rooms on the bottom floor because of flooding.

When driving through Port Arthur, it’s easier to visualize the scale of Harvey’s devastation. Huge heaps of trash — some as tall as houses — dot the roadside across the city. However, trash pickup began recently, and it seems the trash is less prevalent than it once was.

Unable to move back into their houses, some local residents are staying in a tent encampment at Bob Bowers Civic Center. It contains enough beds for 250 people. Another few hundred beds will reportedly be placed at the city’s mall. Workers at the site said they would place two large tents next to the mall, but by 5 p.m. Monday the tents had not been assembled.

As we sit in our relative comfort, it’s unimaginable that you could lose everything. People here have been booted from their homes. Cars were ruined by the flooding, too. In one TV advertisement, a local car dealership said it would give people affected by the hurricane an employee discount.

Everyone affected by the storm has a story to tell, and many still need to be told.

On Monday, I learned about Port Arthur Chamber of Commerce President Bill McCoy’s story. Initially, I called him to talk about the storm’s effects on local businesses, but I got a glimpse at what it was like for some to live through the storm.

“When we went to sleep and got up the next day, the water was 10 inches above the floor,” McCoy said. “We raised the windows to let the fresh air in because raining through the window wasn’t going to make any difference with 10 inches of water.”

He went to his garage and briefly relaxed as floodwaters pooled around his house.

“I went into the garage, pulled up an office chair I got years ago, lit up a cigar and sat there looking out,” McCoy said.

Soon, it stopped raining. At that moment, McCoy’s wife said they should try to leave the house. McCoy protested, saying the water would soon drain.

“But while I was smoking my cigar and watching it, it actually rose an inch because it was still coming from surrounding areas,” he said.

McCoy is fortunate. He’s got a place to stay now. He said an insurance check is in the mail. Recently, a crew of people came to his house to remove wet material.

There’s still a long, arduous road ahead for many in Port Arthur. Most local residents haven’t regained a sense of normalcy. Too many from Port Arthur may never know what normal is again.

Party line: When telephone company retirees get together, it’s…