Party line: When telephone company retirees get together, it’s like family 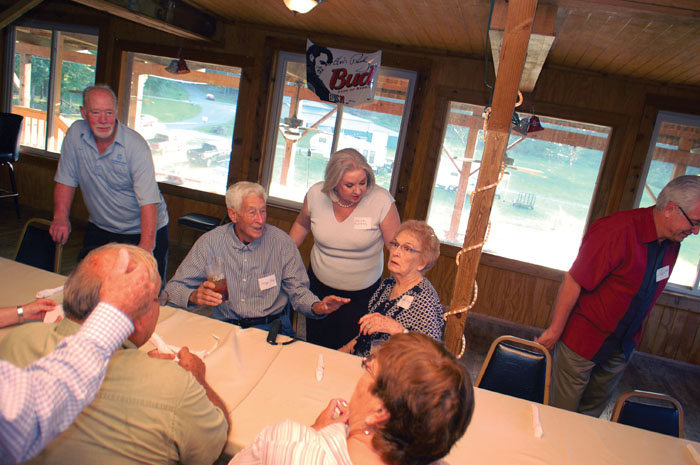 Lonzo Arey and his wife, Martha, are the center of attention during a recent gathering of retired (and some current) telephone company workers at T.J.'s High Rock Lake Restaurant & Lounge. Standing between the Areys is Diane McNeely. At left is Ron Safrit; at right, Tom Trexler. The Areys are sitting across from Don and Sue Grubb. Mark Wineka/Salisbury Post

SALISBURY — When Hurricane Hazel hit North Carolina in 1954, a lot of telephone repairmen from Salisbury and other areas of the state converged on Raleigh, which had been devastated by the storm.

Southern Bell employees Lonzo Arey and Norman Kesler spent seven months in Raleigh after Hazel. They rented an apartment during the week and were able to drive home on weekends.

About that time, Kesler had bought a new convertible, and as they returned to Raleigh one day, he naturally wanted to ride with the top down.

Kesler was showing off, driving in and out of traffic, when he ducked behind a cow trailer.

“I knew what was going to happen,” Arey said.

Remember, the top is down and a cow is the closest thing to Arey and Kesler.

“That son of a gun started using the bathroom,” Kesler complained.

Arey and Kesler have been telling that story ever since, and it still had legs this past Saturday evening when more than 20 men and women retirees of the telephone company (Ma Bell, the big one) gathered for their own kind of reunion.

“It’s nice to have everyone here like this,” said Kesler, who retired as a supervisor. “It makes you think you’re back with the old telephone company.”

The group met for dinner and drinks at T.J.’s High Rock Lake Restaurant and Lounge. Many of them started their telephone careers with Southern Bell. Then through the days of divestiture, the company become BellSouth and, most recently, AT&T.

No matter if you were a splicer, lineman, operator, clerk or supervisor, you developed close friendships with the people you saw day in and day out over decades.

“That’s the way Southern Bell was,” Tom Trexler said. “It was like a family.”

Many remember when Southern Bell’s main Salisbury office was on West Council Street across from St. Luke’s Episcopal Church. The operations center then moved to the low-slung building at South Church and West Bank streets.

Meanwhile, the linemen and installers worked out of 625 Industrial Ave.

Besides performing their daily duties, these were men who seemed to be eternally on call, traveling to different areas to patch up things after storms. It didn’t necessarily have to be hurricanes the likes of Hazel or Hugo.

“It could be a bad thunderstorm in Winston-Salem or Greensboro,” Don Grubb said.

Whenever you get family like this together, a lot of good-natured ribbing ensues. Norman Kesler often is the target, just because it’s fun to give him a hard time.

Someone mentioned Kesler’s name, and Trexler said Norman was so old he had gone to work for the telephone company when it relied on horse-drawn buggies to haul the equipment. Reference also was made to how several of the retirees worked in the days of Alexander Graham Bell.

These telephone company reunions are somewhat recent. The first one was held in February, and it was too much fun not to have another. Kesler, Diane McNeely and Jack Moore have been among the folks making it happen.

“I’d rather be deer huntin’ right now than be here,” Arey said, sitting down for dinner.

But he and his wife, Martha — they’ve been married almost 67 years — couldn’t hide their joy at seeing and talking to everyone.

Martha once was a Southern Bell operator. And the story goes that she and Kesler were both cheerleaders together at Rockwell High. (There are pictures somewhere.)

Lonzo has a brother, Johnny Arey, who also was a splicer. He wasn’t able to make Saturday night’s reunion.

The retirees will tell you there was a time — and it might hold true today — when the good jobs were with the railroad, Duke Power and Ma Bell.

Kesler took time Saturday evening to introduce Arey as the oldest person in the room, only because J.P. “Pinky” Trexler couldn’t make it. Kesler and Arey still meet for breakfast almost every morning at M&K restaurant in Granite Quarry.

Kesler said he has reached the age now that when Lonzo tells a story on him, “I don’t know if it’s the truth or he made it up.”

Arey said he and Kesler would work hours on platforms across from each other splicing wires together. They would talk about things such as politics and sports, but the conversation always turned in the end to their wives, Martha Arey and Betti Kesler.

Lonzo laughed, trying to say it loud enough for Martha to hear.

It apparently included a belly dancer and was held at the old Kent’s Steakhouse.

More than one person asked Lonzo on Saturday evening if he had eaten a banana peel sandwich lately. Credit Martha for that. She was making Lonzo’s lunch one morning — it included a banana sandwich — when he apparently said something to tick her off.

Without his knowing, she dumped the banana in the trash can and placed the banana peel between two slices of bread. Lonzo opened his lunchbox to that surprise later in the day, “and I have not lived that down,” he said.

There are some telephone stories better not told here, but Kesler likes the one in which a lineman happened to be making a repair and overheard a conversation between two older women.

One of the women’s husbands had just died, and she confessed to her friend she thought she could still hear him sometimes in the back room of the house calling for, “Water, water.”

Not long afterward, the lineman flipped on his headset and whispered into the line, “Water, water.”

Kathy Slye attended Saturday night’s get-together. Her husband, Taylor, died less than a year ago, and Jack Moore said the splicer was a perfectionist and “one of a kind.”

Slye kept a log of every splice he ever did — detailed documentation to which he could always refer if there were ever a problem. “Nobody else did that,” Moore said.

In the pecking order of telephone company employees, Moore said, splicers ranked much higher than linemen, and Slye never missed an opportunity to point that out. He was notorious for leaving signs and notes behind for the linemen, if he knew they would see them.

One day Moore and a fellow lineman had to splice together some wires at the central office in Salisbury. It was Slye who fashioned a homemade sign and hung it over their work saying, “Danger: linemen splicing.”

In retirement, Moore has continued his well-known barbecuing exploits and is doing well selling his Blowin’ Smoke sauce in places throughout the region.

So when Kesler suggested that the next gathering of the telephone company men and women involve a cookout, Trexler had to get a jab in.

“You know anyone who could do barbecue — good barbecue?” Trexler asked.