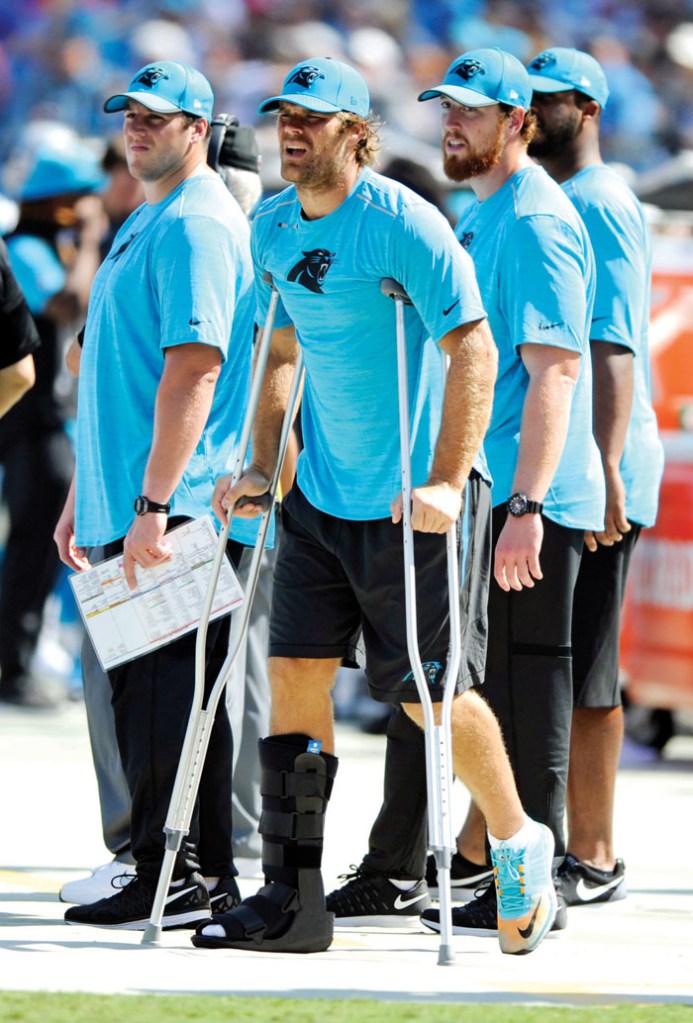 Carolina Panthers' Greg Olsen stands on crutches in the second half of an NFL football game against the Buffalo Bills in Charlotte, N.C., Sunday, Sept. 17, 2017. Olsen was injured earlier in the game. (AP Photo/Mike McCarn)

CHARLOTTE (AP) — The Panthers struggling offense will have to find a way to replace its leading receiver in each of the last four seasons.

Rivera wouldn’t speculate on how long Olsen will be out. However, the 32-year-old tight end said after Carolina’s 9-3 win over the Bills on Sunday that he expected to miss several weeks.

Olsen has never missed a game due to injury in 11 seasons.

The injury occurred while Olsen was running a route and felt something pop in his foot. He wanted to go back in the game but quickly realized something was not right. He was taken to the locker room where he later emerged on crutches.

Olsen has led the Panthers in receptions the past four years and is coming off three straight 1,000-yard seasons.

Rivera said who picks up the slack on offense is to be determined.

“Quite honestly, we’ll see,” Rivera said. “It just depends on who they try to take away and, quite honestly for us, who steps up.”

Rivera said he’s confident that Ed Dickson, the team’s backup tight end, can help the passing game. The coach likes third-stringer Chris Manhertz too, although he wouldn’t rule out adding another tight end to the roster.

Dickson has two catches for 26 yards this season, but has never been a big part of Carolina’s passing game. Over the past three seasons with the Panthers he has 37 combined catches for 370 yards and three touchdowns.

He did catch a career-high 54 passes for 528 yards and five TDs for the Baltimore Ravens in 2011.

“We’re not going to change the offense because Greg is out,” Rivera said. “We’re going to do the things that we do. These are the things that we have been practicing on. I think one of the worst things you can do now is say we have to change all of the stuff we have put in. Ed is more than capable. He has that kind of ability and we as a coaching staff have to stick with what we do.”

Given the way Olsen likes to work the middle of the field, more balls could be headed to wide receiver Kelvin Benjamin and rookie running back Christian McCaffrey out of the backfield. It’s likely wide receivers Curtis Samuel and Russell Shepard could see a few more balls thrown their way, too.

Quarterback Cam Newton said Sunday the team will miss Olsen, but expressed optimism that he won’t be lost for the season.

“Granted, Greg is an extremely key artery for our team, as well as this offense, but Ed (Dickson) is ready to blossom,” Newton said. “He’s a diamond in the rough. I don’t want to put too much on Ed, but he’s be making plays for us – very subtle over the years. That’s why he’s been somewhat of our unsung hero over the years and hopefully, not hopefully, we are going to be expecting big things for him and knowing he’s going to pick the gun up and keep shooting.”

The Panthers have only scored two touchdowns and six field goals in their first two games with Newton overthrowing two open receivers for would-be touchdown passes. One of those was Dickson in the season opener at San Francisco.

Shepard said it’s time for everyone to step up in Olsen’s absence.

“He has 3,000 yards over the last three years, so that goes somewhere,” Shepard said. “Offensively we need to make up for it. We need to come together. We need some more production from our receivers and tight ends.”

Clear sailing: No. 2 Clemson poised for another title…