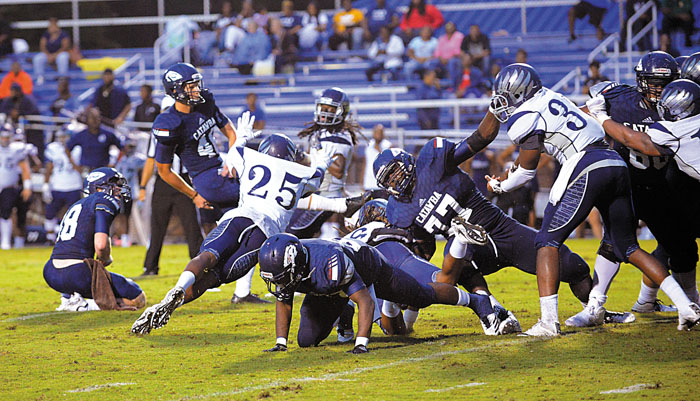 It may be the Indians’ 6-foot-5, 195-pound sophomore kicker Lee Brackman, who has earned nicknames such as “Big Toe” and “AT&T” from teammates and coaches.

“AT&T is for his long distance on kicks,” Catawba head coach Curtis Walker said. “Lee is a weapon.”

He was all-state in football (as a quarterback), soccer and tennis. He had his moments in the other four sports. Monsignor Donovan is a small private school — about 150 students — so the Rams needed Brackman to play on every team. He was good at everything, even when he was juggling three or four sports in the spring months. Besides the school stuff, Brackman played club soccer and travel basketball. So he learned, above all, how to manage his time.

Growing up in Athens, about 75 miles east of Atlanta, Brackman had only vaguely heard about Catawba.

“We had guys from Athens signing with Mars Hill football every year,” Brackman said. “So I knew about Mars Hill. All I knew about Catawba was that it was in the same conference.”
As a high school sophomore, Brackman’s fall sport was cross country, but his junior year, Monsignor Donovan hired former Vanderbilt quarterback Kurt Page as head coach and began fielding a football squad. Brackman, needless to say, became the new program’s first quarterback.

The team began with 17 players, no home field and an 84-14 scrimmage loss. But the program grew quickly. As a senior in the fall of 2014, Brackman passed for 2,800 yards and 32 touchdowns for an 8-3 team that made the Georgia Independent School Association state semifinals.

Brackman expected to play college soccer. As a 6-5 striker he’d scored 30 goals in just 13 games as a  high school senior and he’d attracted recruiting interest from Division I programs.

Fortunately for Catawba, one of the football parents at Monsignor Donovan had sent film of Brackman’s football games all over the place —  including Catawba.

“Catawba responded after seeing that film and wanted me as a kicker,”  Brackman said. “I visited and it was just a great fit, the football program and the school. I liked the small class sizes, the opportunity to learn from professors by asking one-on-one questions.”

Brackman redshirted in 2015. In 2016, he won the kickoff job. He was, at times, the placekicker, although that duty usually was handled by Brennan Lambert. When Lambert, the preseason All-SAC first-team kicker, elected not to play football this season, Brackman’s responsibilities expanded. Now he handles all the kicking. He’s also the backup punter. If anything happened to Caleb Berry, Brackman would be the guy.

“Brennan and I are still great friends and we had a competition last season that pushed us both,” Brackman said. “I still wish I’d won the job rather than just getting the job.”

While the task of converting field goals and extra points may have fallen to Brackman by default, he’s taken it and run with it. No one can complain about what he’s done so far. He’s 2-for-2 on field goals (both against UNC Pembroke last Saturday) and 15-for-16 on PATs. The PAT he was deemed to have missed at VMI was a close call.

“I’m a little bit biased, but I still think that one was good,” Brackman said. “I want to make every kick. If you don’t want to make them all, you probably shouldn’t be doing it.”

“He almost put it through the uprights on the kickoff, and he was trying to do that,” Walker said. “The kick was straight enough, but about 2 yards short. A lot of his kickoffs are 6 to 8 yards deep in the end zone. If he only kicks it to the goal line, we know he missed it.”

While Walker appreciates Brackman’s reliability on PATs and field goals, it’s on  kickoffs where Brackman excels most. He’s probably had as much to do with Catawba’s first 3-0 start since 2009 as anyone. He had six touchbacks at UNC Pembroke (forcing UNCP to start from its 25-yard line), and he’s had 13 touchbacks on his 21 kickoffs this season.

“Lee’s been huge as far as winning that battle for field position,” Walker said. “He keeps making teams start from the 25, and it’s not easy to go 75 yards against our defense.”

Actually, it’s been almost impossible to drive against a Catawba defense that has stopped opponents 36 out of 44 times so far on third-down conversions. That figure that ranks in the top five nationally in Division II.

Brackman said his improved kickoffs this year are a product of rest as much as work.

“I know I’ve gotten stronger from weight lifting, but I’ve also gotten more flexible, and that’s been a factor,” Brackman said. “Last year, I kicked so much in practice that I felt like I had a dead leg late in the season and my kickoffs weren’t as strong. Now I’m still putting in a pretty hard work session on Mondays, but after that, I’m working on form and flexibility. I’ve been fresher for the games.”

Off the field, Brackman, who is a stellar student, stays busy.

“Fortunately, I play a position that gives me time to do some things,” Brackman said.

Brackman was an intern for six weeks over the summer at the Duke University Medical Center. He’s  working on getting a paper published, and he’s involved in a research project for New Sarum Brewing in Salisbury.

Over the Christmas break, Brackman will be leading the Catawba chapter of Volunteers Around the World on a medical outreach mission to Peru. The volunteers will be opening mobile clinics and will bring medical treatment and nutritional and health education to a remote area.

“I have a commitment to serve the under-served,” Brackman said. “I’ve already been to Haiti on mission trips, and I know this will be a very rewarding experience and a humbling experience. We’ll learn a lot about ourselves.”