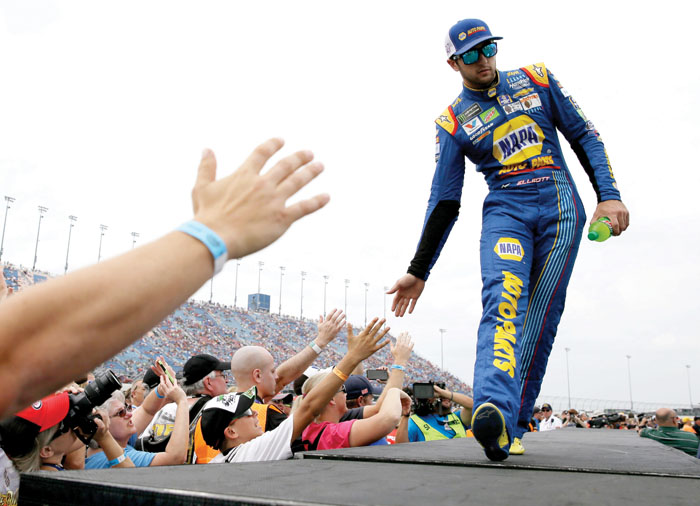 JOLIET, Ill. (AP) — Kevin Harvick considered the list of young drivers often suggested as NASCAR’s next big stars and replacements for departed veterans Jeff Gordon, Tony Stewart and Dale Earnhardt Jr. He suggested that only one prospect could truly hook a new generation of fans.

Elliott hasn’t yet reached Junior-levels of popularity — or even Danica Patrick as she nears the stock car exit ramp — but the 21-year-old Hendrick Motorsports driver just might be the next one to carry the banner as NASCAR’s most popular driver.

First, Elliott wants to hold the checkered flag for a victory lap at a Cup race.

Elliott had the race of his season at NASCAR’s playoff opener at Chicagoland Speedway over the weekend, matching his career-best finish of second, behind championship favorite Martin Truex Jr. He led 42 laps, the most since he was out in front for 106 at Phoenix where before he faded to 12th. Elliott stayed strong this time and even won the second stage, jumping to sixth in the standings with two races left before the playoff field is cut to 12.

Elliott has yet to win a Cup race in 68 career starts and heads to a New Hampshire track where he’s never finished better than 11th in three career starts. The cover of the New Hampshire race program nonetheless shows Elliott and Kyle Larson in sunglasses with the headline, “The Future is Bright: Elliott and Larson to Carry NASCAR Torch.”

Larson was fifth at Chicagoland and is second in the standings. Both drivers seem a lock to advance to the second round and from there, anything can happen.

NASCAR would surely love a duel between a pair of 20-somethings that could turn into a rivalry for years.

For now, Elliott was wishing his No. 24 Chevrolet could have pushed Truex harder down the stretch Sunday.

“It would have been great to battle with Martin a little bit more,” Elliott said. “We didn’t have anything for him. From where we’ve been to where we ran today was a major, major step in the right direction”

Elliott, a two-time Daytona 500 pole winner, could break through two weeks from now at Dover, where twice he’s finished third. He had two third-place finishes in the first round last year, then sunk in the second when he finished 33rd, 31st and 12th.

“I did feel like we peaked about this time last year,” he said. “But this isn’t last year, so it really doesn’t matter.”

What does matter is that Elliott is flashing the potential of becoming a future champion. He has been in the Hendrick Motorsports development program since 2011, when he was a freshman in high school, and won the 2014 championship in what is now the Xfinity Series. Elliott was known in racing long before his first race, the little kid hanging around the race track with his famous dad. Elliott will switch from the No. 24 to the No. 9 next season in a nod to his father, 1988 NASCAR champion Bill Elliott.

Bill Elliott won NASCAR’s most popular driver award a whopping 16 times and it’s that link to the past — and excitement for the future — that has drivers like Harvick convinced Chase’s success is key for any type of NASCAR’s needed resurgence.

Elliott may still be too young to truly challenge Truex or former champions ahead of him in the standings such as Harvick, Brad Keselowski and Kyle Busch for the title. Seven-time champion Jimmie Johnson, Elliott’s teammate, is hoping to make NASCAR history with an eighth title.

Busch, the 2015 champion, posted a blistering pole speed at Chicagoland and dominated the race early until pit road miscues knocked him out of contention. Clean that up, and he could go door-to-door with Truex for the title in the finale at Homestead.

Elliott hoped he could give the contenders a run down the stretch.

“We need to be better than what we’ve been in the past,” he said. “Obviously, have some work to do to get to that bunch that won the race.  Aside from them, I think we were competitive to the rest of the field.”