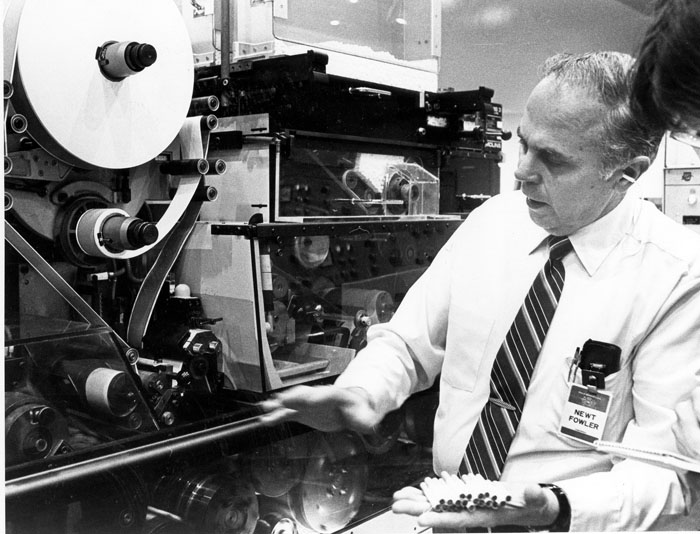 In this photograph from Jan. 3, 1983,  General Manager Newton Fowler holds newly made cigarettes and explains how the module he’s standing next to can produce up to 365 packs of cigarettes a minute. The Philip Morris USA manufacturing plant in Cabarrus County had just begun limited production of Merit brand cigarettes, marking the start of a $300 million, 1.8-million-square-foot facility that by 1987 was expected to employ 2,000 to 2,500 people and rival Cannon Mills as Cabarrus County’s chief employer. The plant, which started with about 350 workers, brought with it state-of-the-art cigarette-making machinery, unionized labor and a legal battle with the city of Concord over annexation. At the time, employees received a free pack of cigarettes each day. Fowler, whose son, Ed, was playing basketball for Catawba College at the time, became a strong athletic booster for the school. “Mission Marlboro” was the name of the industrial recruitment effort that brought the Philip Morris plant to Cabarrus County. A $400 million expansion of the plant followed in the early 1990s. Citing a decline in the U.S. demand for cigarettes, Philip Morris announced in 2007 it would be closing the 2,500-employee plant over the following three years.