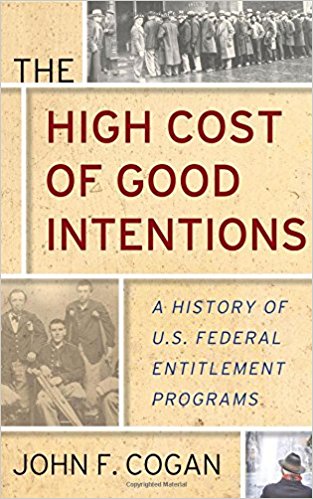 Congress’ fall agenda is packed with items such as tax reform, the debt ceiling, DACA and various spending bills.

Of course, it’s folly these days to assume that Republicans and Democrats could bridge the massive political divisions dominating the legislative landscape to reach a consensus on such a vital issue. But the nation’s long-term fiscal health will eventually depend upon it. And each year that passes without a solution only brings us closer to the looming cliff.

In his new book, “The High Cost of Good Intentions,” Stanford economics professor John F. Cogan chronicles how we arrived at a point where the nation is $20 trillion in debt and federal entitlements now constitute more than half of all spending. In an interview with The Wall Street Journal, Mr. Cogan notes that the urge to win votes by doling out goodies is a temptation that few politicians of either party can resist.

The author points out that in 1873, just 8,000 Civil War veterans collected pensions. By the 1890s, that number had risen to about 1 million and accounted for 40 percent of all federal outlays. It seems Congress kept expanding the eligibility requirements.

Mr. Cogan also describes a similar model for Social Security, Medicaid, Medicare and food stamps. “It’s a step-by-step expansion,” he said. “Each expansion tends to be permanent. And each expansion then serves as a base upon which Congress considers the next expansion.”

The Obama administration’s Medicaid enlargement — a key point of contention in the recent health care debate — is a prime example. Ditto for the Social Security disability program, which Mr. Cogan points out originally applied only to those 50 or older who were unable to work at all. “Gradually, Congress eliminated the age requirement,” the Journal reports. “Then lawmakers allowed benefits for temporary disabilities.” The number of beneficiaries has quadrupled since the mid-1980s.

Mr. Cogan offers no hard-and-fast solution for tackling these issues. But he does say that any fix will require a combination of presidential leadership, bipartisan cooperation and an agreement among both politicians and the general public that “there’s a problem.”

None of those conditions exists in Washington today, which explains why the appetite to reform entitlements is nonexistent among the political elite. But let’s hope Mr. Cogan’s tome at least helps keep the issue in the spotlight until the harsh fiscal realities finally penetrate the Beltway’s financial fantasyland.