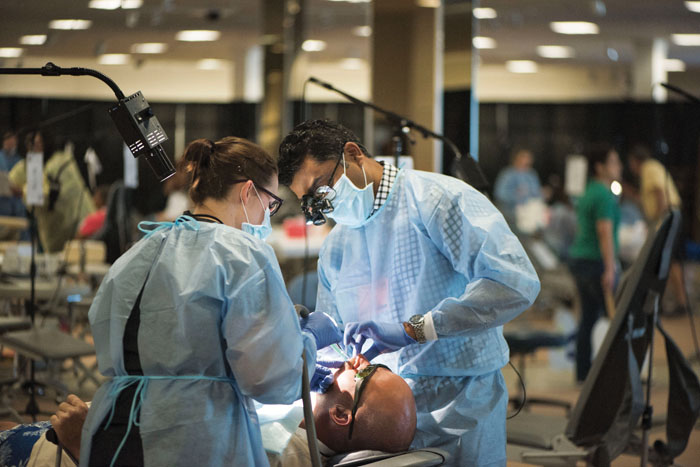 Bekah Motley and Dr. Janak Patel work to extract teeth from patient Woody Page during the free dental clinic. Salisbury's third N.C. Missions of Mercy dental clinic is being held at the West End Plaza. Hundreds of people got in line early to improve their chances of getting seen by dentist. Jon C. Lakey/Salisbury Post

Many thanks to Mark Wineka who has done a marvelous job of informing the public about the North Carolina Dental Association’s Missions of Mercy clinic for those who lack the financial means to receive dental care. Hundreds were helped this weekend by the dentists, dental hygienists, dental assistants, pharmacists and other medical personnel.

Unsung heroes were those who donated and served food to the 350+ volunteers. Thanks to the people and businesses I will list, all foods were donated or paid for with grants from Thrivent Financial Services, the Salisbury Kiwanis Club, the Granite Quarry Civitan Club, Dr. Stacey Sigmon, Kathy Sanborn and an anonymous donor.

The six meals provided were organized by seven team leaders: Norma Goldman, Ann Teague, Bev Cobb, LeNea Goble, Fran Simpson, Mary Martin Little and overall leader, Karen Mitchell. Each of these women had teams of five to seven men and women who helped them provide and serve food. It was my privilege to work with all of these folks as well.

With the combined efforts of the women of Temple Israel, the women of Organ Lutheran Church, the women of the East Rowan Y and Women and Wine, over 1,000 servings of dessert were provided for the three-day event.

A miracle occurred in Salisbury this weekend with the Missions of Mercy Clinic. The people and businesses listed above helped make it happen.