Fire Station No. 3 once again on City Council agenda 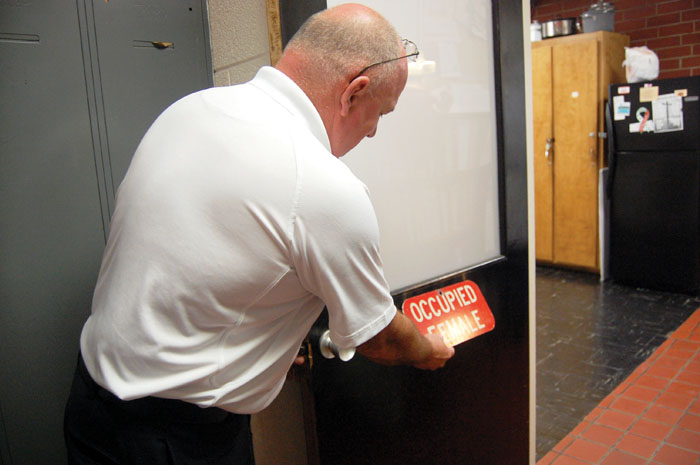 Fire Chief Bob Parnell demonstrates what female firefighters have to do when they need to use the locker room at the current Fire Station No. 3. City Manager Lane Bailey said that, because the station was built in the 1950s, there are no designated quarters for female firefighters — one of the many reasons that he said a new station needs to be built. (Jessica Coates/Salisbury Post)

SALISBURY — City Council will once again take up the issue of rezoning the 100 block of Mahaley Avenue for a new Fire Station No. 3 at their Tuesday meeting.

When the issue was last brought up at a council meeting, on Aug. 1, it was tabled after 10 people spoke out against the proposed location during public comment.

One of those people was Councilman David Post, who recused himself from deliberations because he said the proposed station location would “significantly” affect the value of his house.

Other concerned citizens mentioned the potential for light and sound pollution, as well as the destruction of a wooded area on the proposed lot.

City Manager Lane Bailey said that what he believed the council and citizens wanted after the Aug. 1 meeting was more information about how the city chose the Mahaley Avenue location.

He said that was one of the reasons the fire department and the city held an open house at the current Fire Station No. 3 Sunday — to show concerned citizens the work that went into choosing the proposed location.

“This wasn’t the first site that we looked at. There were sites that were considered before I moved to Salisbury,” Bailey said.

Fire Chief Bob Parnell said that the search for a new Fire Station No. 3 location may have begun as early as 2011.

Bailey said that, in the time that he has been here, the city has looked at multiple locations. But he said that each one either had an unwilling seller or was too far away from the area that the fire station needed to serve.

Bailey said that, for the properties with unwilling sellers, the city could acquire them using eminent domain.

“But we don’t think that’s the best way to go about doing business,” Bailey said.

Bailey also said that the station’s current site — 1604 W. Innes St. — is not an option because the structure was built on “fill dirt.”

He said that left the Mahaley Avenue property as the best option.

Architect Bill Burgin said that in addition to being a lot with willing sellers and a good foundation, the 100 block of Mahaley Avenue is strategically located to help the department shorten response times to structures in its services area.

“(Firefighters) literally set their gear beside the door to the (fire truck). Literally, that’s how quickly they have to respond,” Burgin said. “So a lot of these kinds of response things that we would just say, ‘What’s another four blocks?’ Well, another four blocks may be a minute.”

Chief Parnell said that the construction of the new fire station will be a significant investment of taxpayer money.

The new fire station, as it is designed for the Mahaley Avenue lot, would be approximately 17,500 square feet. It would include a bay for each fire truck, separate locker rooms for male and female firefighters and updated sleeping quarters.

Other items on the council’s agenda include:

• Considering whether to issue a demolition permit for the structure located at 201 E. Innes St.

The demolition of the East Innes Street building was brought up at a Historic Preservation Commission meeting last year. At the meeting, the commission voted to delay the demolition for one year.

The building has a distinct granite exterior that made some commission members want to save it.

There is a chance that pieces from the existing building could be used in a future property.

• Considering whether to award a contract for a Newsome Road extension between Innes Street and Faith Road.

The City Council meeting will be held Tuesday at 5 p.m. at the Council Chambers — 217 S. Main St.

Kids brush up on dental care at Smart Start…