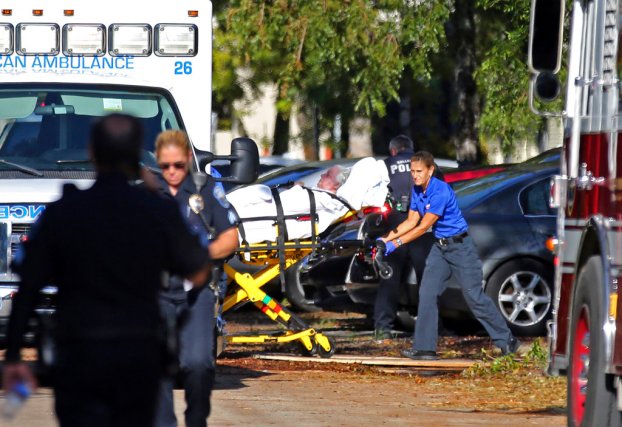 FILE - In this Sept. 13 file photo, a woman is transported from The Rehabilitation Center at Hollywood Hills as patients are evacuated after a loss of air conditioning due to Hurricane Irma in Hollywood, Fla. Multiple people died and patients had to be moved out of the facility, many of them on stretchers or in wheelchairs. Authorities have launched a criminal investigation to figure out what went wrong and who, if anyone, was to blame. (Amy Beth Bennett/South Florida Sun-Sentinel via AP, File)

“Unfathomable.” “Inexcusable.” Those were the words used respectively by Florida Gov. Rick Scott, R, and Sen. Bill Nelson, D-Fla., to describe the deaths of eight elderly people found in a sweltering nursing home in the aftermath of Hurricane Irma last week.

Those descriptions, while accurate, nonetheless fail to capture the full, inexplicable horror of the deaths. That people who were so vulnerable and needed special care were instead treated as an afterthought is insupportable.

Investigation of this incident, already underway, needs to sort out the conflicting accounts of what happened to determine who — and it seems there might be multiple parties at fault — dropped the ball in protecting these people. There also needs to be a thorough review of nursing-home policies and practices and state oversight.

The governor Saturday plugged one hole in the safety net with new rules requiring nursing homes and assisted-living facilities to have generators capable of maintaining comfortable temperatures for at least 96 hours. But are there other gaps that could imperil lives?

Causes of death of the eight people, ranging in age from 71 to 99, at the Rehabilitation Center at Hollywood Hills are still to be determined, but authorities suspect that a loss of power and air conditioning turned the facility into a death trap; the elderly are particularly susceptible to heat-related illnesses.

Temperatures were reported to be stifling when rescue workers, after the third emergency call Wednesday, recognized the gravity of the situation — three people already dead and others in medical distress — and undertook an evacuation.

Hollywood, Florida, police have opened a criminal investigation into the deaths, and investigators from the state attorney general’s office were also dispatched. New admissions to the home, which reportedly has a history of citations and poor inspections, were halted.

Disquieting questions have emerged. Did the home, as officials alleged, reach out to the governor’s office for help but find itself ignored? Should the power company have placed a higher priority on calls from the home?

Why didn’t staff at the facility evacuate these fragile patients sooner? What exactly were its emergency plans, and does the state need to stiffen oversight? It is mind-boggling that eight people died in a facility across the street from a hospital, and it’s maddening that so far there has been more finger-pointing than answers.

Hillary Clinton’s new memoir of her failed presidential campaign is titled “What Happened.” A better title would be “What Happened?”... read more