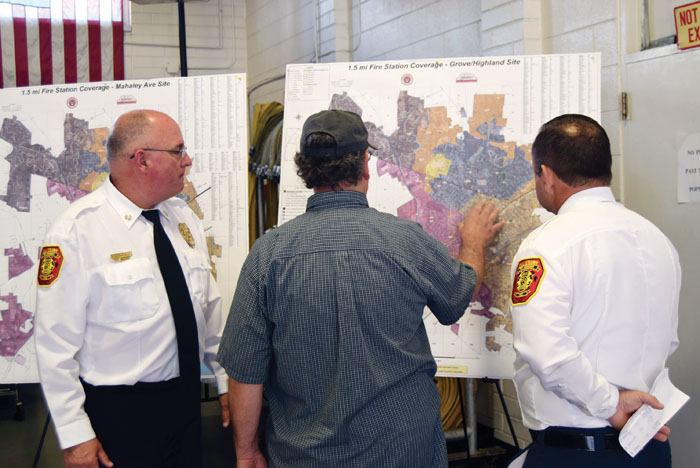 SALISBURY — Residents of Lilly and Corriher avenues turned out in force Sunday for a neighborhood meeting to discuss potential locations for Salisbury Fire Station No. 3.

Fire Station No. 3 — built in 1956 — is the second-oldest fire station in Salisbury. Located at 1604 W. Innes St., it serves the northwestern part of the city, which includes Catawba College, Livingstone College and the Veterans Affairs Medical Center. But after 60 years, the building is plagued with problems, and the department needs a new space so it can better serve the area.

The location of a new station has been a point of contention at recent Salisbury City Council and Planning Board meetings. If approved, the new station could be built in the 100 block of Mahaley Avenue next to Salisbury Pediatric Dentistry. If built there, the station would back Lilly Avenue, a residential street.

The neighborhood came out to the current Fire Station No. 3 on West Innes Street on Sunday, hoping to voice concerns and complaints or to view possible alternative sites. However, city officials said the event was mostly to pull back the curtain on why the property — known as the “bunker site” — was the top choice. Seven other properties had been examined for compatibility and summarily discarded.

Residents said they were disappointed such a meeting hadn’t been held months before — instead of two days before what could be the decisive City Council meeting.

“This is going to be our lives,” Lilly Avenue resident Jay Bolin said.

While he, and other residents, want the fire department to have a new station, they also have numerous concerns about the negative impacts it could have on their neighborhoods.

City Manager Lane Bailey said because of the area it served, it was nearly impossible for Fire Station No. 3 not to be in a residential area.

“That’s the nature of where this station needs to be located,” he said.

Other sites considered included three parcels on Mocksville Avenue, right across from Novant Health Rowan Medical Center; the current site of Food Lion Store 1 on Mahaley Avenue and a site on Grove Street near Highland Avenue.

The main consideration when choosing a site was response time, city officials said. An improved response time would improve ISO ratings and help Salisbury as a whole.

The bunker site would allow the station to access 45 miles of its roughly 65 road-mile area within a 1.5 mile radius. While response time would improve the most on the Mocksville Avenue locations, those sites were discarded for other reasons.

Burgin has been hired to design the new station, which would feature a landscape wall between 44 inches and 13 feet in height, and a tree buffer between the fire department and Lily Avenue. The bunker site was the only one that did not have the front of the fire station — where most of the noise would be — facing residences.

Parnell said that there would only be a two-decibel increase behind the station.

“This location I do not believe will add to what you already hear,” he said.

And Burgin assured residents that the noise would not disturb the usually quiet neighborhood.

“You want to buy my house?” Bolin joked at that.

But residents also voiced concerns about decreasing property value, and loss of green space, as a nearby stand of pines could possibly be cut down. Bolin said he was concerned that the neighborhood would soon be made up of a transient population.

“You’re going to be killing our quality of life,” resident Joanna Young said.

Burgin said he would be willing to work with residents to tweak plans if that was what was necessary. The high back wall could be cut at a wide angle, so that the highest portion faced away from residences, some of the trees could be preserved or shorter light poles could be used.

“I just gotta hear that that solves problems,” Burgin said.

The property will be discussed at Tuesday’s Salisbury City Council meeting.

Fire Station No. 3 once again on City Council…