At New Sarum, livestock beef up on spent beer grain 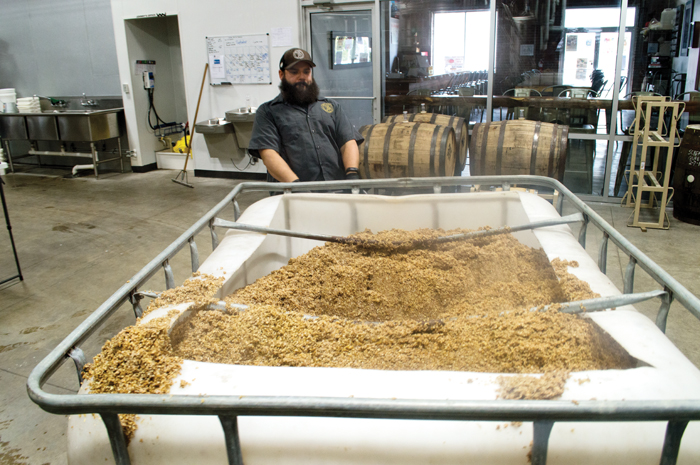 Josh Bergeron / Salisbury Post - News Sarum Brewmaster Andy Maben pulls a cart full of spent grain out of the brewery. New Sarum donates its used gran to farmers, who then feed it to livestock.

SALISBURY — Best known for their beer, New Sarum Brewing’s products also make it into the mouths of local livestock.

The brewery donates its spent grain to local farmers who, in turn, use it as feed for livestock. Brewery employees and farmers say the grain adds variety to diets of local livestock and adds a few pounds, too. Brewmaster Andy Maben said four farmers pick up spent grain, and two come more frequently than others.

One of the farmers is Jim Greene, who raises cattle in addition to serving as a county commissioner and running an insurance agency. Greene sells his livestock by the pound, and spent grain from New Sarum is one way to add pounds, Greene said. New Sarum’s spent grain is roughly 18 percent protein, which Greene said is relatively high for cattle feed.

“For them this has been like going to grandma’s and having cake and ice cream,” he said. “It’s really good feed for them.”

After more than a year, Greene said, the cows know when it’s time to eat the spent grain and run toward his truck when he arrives.

Sometimes, humans enjoy the spent grain, too. When New Sarum recently put a couple hundred pounds of almonds into one of its brews, the leftover product served as breakfast for employees, COO Edward Moscardini joked.

“We went in with cups and started eating in,” Moscardini said. “I can’t imagine what the cows were thinking about when they got it.”

Meanwhile, the grain picked up by Greene had the consistency and taste of oatmeal.

New Sarum has offered its spent grain to farmers since its early days — before it built the current downtown Salisbury brewery — instead of selling the grain to a company that would later sell it back to farmers.

“We’d just rather work with local people, local farmers,” Moscardini said. “And, it’s a two way street because we can work with them on items like produce for specialty beers. It’s works better when you’re friendly with your neighbors.”

There are only two requirements to pick up grain from the brewery: work with New Sarum to find a time to pick up the grain and purchase bins to hold the grain. In Greene’s case, he found out about the program and asked to be put on the list to pick up grain. Several days later, he was in the rotation, Moscardini said.

Maben said donating grain back to farmers equates to giving the farmers back the same grain once grown in local fields.

“We might as well complete the circle within the smallest footprint possible,” he said. “That’s sort of what craft beer is all about anyway.”