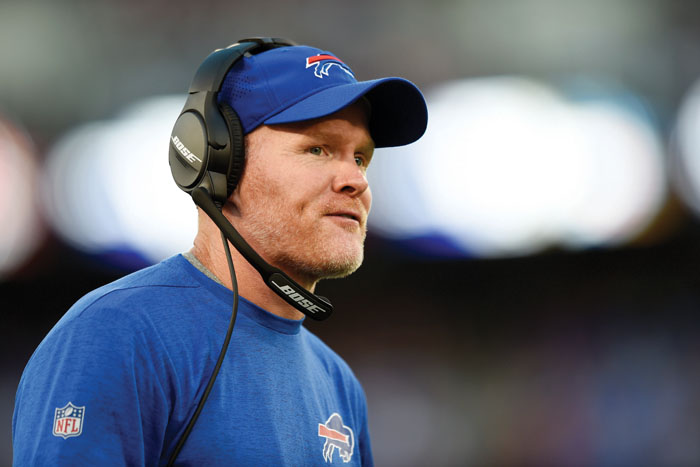 FILE - In this Saturday, Aug. 26, 2017 file photo, Buffalo Bills head coach Sean McDermott watches the first half of a preseason NFL football game against the Baltimore Ravens in Baltimore. Buffalo Bills coach Sean McDermott spent the past six seasons going up against Cam Newton daily in practice. So you’d expect the Bills first-year coach to know a thing or two about how to slow down the league’s 2015 MVP, right? McDermott joked the problem is he won’t be on the field. The Bills play the Panthers on Sunday, Sept. 17, 2017. (AP Photo/Gail Burton, File)

So you’d expect the Bills’ first-year coach and former Panthers defensive coordinator to know a thing or two about how to slow down the league’s 2015 MVP, right?

“The problem is I’m not out there playing,” joked McDermott.

McDermott, now the head coach in Buffalo, has spent the week relaying the Panthers’ strengths and weaknesses to his players as the Bills prepare to head to Charlotte in a game some are calling “Carolina vs. Carolina North.”

When McDermott took a promotion in Buffalo earlier this offseason, a parade of former Panthers followed.

The Bills hired longtime Panthers front office executive Brandon Beane as their new general manager. They signed former Panthers All-Pro fullback Mike Tolbert, quarterback Joe Webb and wide receiver Philly Brown too, although Brown has since been released. They even struck a trade with the Panthers.

McDermott said he wanted guys with the “right DNA” to help build his team in Buffalo.

Given his six-year tenure in Carolina, McDermott’s familiarity with the Panthers has been a hot topic all week. But both sides seem to think that when push comes to shove the game will ultimately be decided by the players on the field, not McDermott’s influence.

Newton said the Panthers can’t deviate much from their game plan and should try to use their familiarity with McDermott’s play calling tendencies to their advantage on both sides of the football.

“Yes, he knows us. Yes, we know him,” Panthers safety Kurt Coleman said. “But it’s going to come down to guys just beating the guy across from them. When you know each other that well you have to whoop a man.”

Things up watch on Sunday when the Panthers host the Bills:

D-LINE ROTATION: The Bills are learning about McDermott’s defensive line rotation, which includes almost equal playing time for starters and backups. Defensive tackle Marcell Dareus only played 34 snaps against the Jets, but said he likes the rotation.

“It takes a little getting used to, but at the same time we all feel fresh,” Darius said. “We’re ready for the fourth quarter. The other thing (is) we’ll be ready later on in the season.”

THE REAL MCCOY: The Bills led the NFL in rushing each of the past two seasons and are off to another great start.

LeSean McCoy had 110 yards rushing and 49 yards receiving on 27 touches in a 21-12 win over the Jets last week, but says “there are things we could have done better.” McDermott insists he’s going to use the 29-year-old McCoy as often as he needs to put Buffalo in a position to win.

Tolbert is spelling McCoy as the primary backup after Jonathan Williams was among the final cuts. That gives Buffalo a combination of shiftiness in McCoy and straight-ahead power in Tolbert.

SPREADING IT AROUND: Panthers wide receiver Kelvin Benjamin and tight end Greg Olsen combined for just three catches last week — a number that should improve dramatically as the season goes along. Newton said there was a time in his career where he would worry about his receivers getting enough touches.

“Years past I’ve had that approach. But now I leave that solely up to the play-caller,” Newton said. “When that play call is called, it’s up for me to go wherever the defense dictates the ball to go.”

MORE WR PACKAGES: Rookie running back Christian McCaffrey was an active member of the offense, lining up at a number of different positions on offense and recording 85 yards on 18 touches.

Panthers coach Ron Rivera liked what he saw from the team’s first-round draft pick, but said he’d also like to see his team mix up its wide receivers packages this week. In particular, he’d like to see what speedsters Damiere Byrd and rookie Curtis Samuel can do to help stretch the field.

FREE TO KICK: The Panthers made the decision to go with Graham Gano at kicker this week after cutting rookie Harrison Butker. Gano went 3-for-3 on field goals against the 49ers in the season opener.