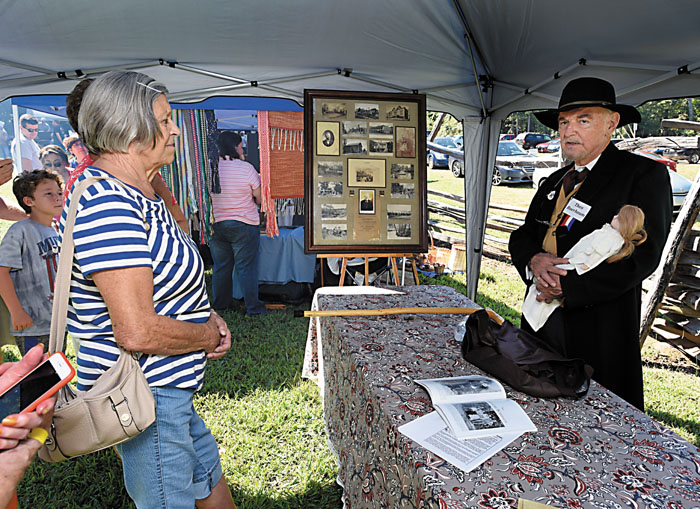 Judge John Holshouser played the role of Theo Buerbaum at the Germanfest. He holds a doll that was purchased from the Burerbaum store on Main Street in 1901 for Elsie Holshouser. The doll most likely was made in Germany with a porcelain head and real human hair. It has been handed down in the Holshouser family to John Holshouser. photo by Wayne Hinshaw, for the Salisbury Post

GRANITE QUARRY — On Saturday morning, the grounds of the Old Stone House were alive with the smells of baking and brewing. Kaye Hirst, former executive director of the Rowan Museum, pulled fresh-baked cinnamon cookies from the property’s outdoor oven, while guests sampled homemade apple butter and sauerkraut.

The home’s annual Germanfest is a celebration of colonial German life, and a nod to the heritage that many in Rowan County share.

Randy Lassiter, with the Rowan Museum, said that German heritage in Rowan County was much more “deeper and widespread than most people realize.” Nearby, a poster board listed all of the local surnames that are derived from original German settlers — from Agner to Walker.

“We’re trying to create an awareness of German heritage in Rowan County,” Lassiter said. “Once we do that we can develop an appreciation.”

Beginning in the 1700s, immigrants of German origin began heavily settling Rowan County — particularly in the South and East. With them, they brought their names, their culture and Lutheranism, Lassiter explained.

“They were some of the earliest residents of Rowan County,” he said.

Among that group was the Braun family, who constructed the 1766 Old Stone House in Granite Quarry. Their descendants — now known as the Brown family — roamed the grounds, mingling with visitors.

Charlene and Wichita Murphy moved to Rowan County 11 years ago. The couple is of Irish decent, but joked that they “weren’t going to judge.”

It was their first visit to the Old Stone House.

“It’s a beautiful day and we wanted to get out,” Charlene said.

Originally from Ohio, the pair are no strangers to German festivals. Wichita recalled one in Waynesville, OH, that would shut the entire town down for the duration. Though Rowan’s Germanfest was smaller, the two said they were eager to see what it had to offer.

The event was a blend of the old with the new — with food, music, basket weaving, dolls and photographs. Salisbury brewing company New Sarum was on hand offering German beers specially brewed for the event. Three of the four beers specially created for the Germanfest event were crafted at the Old Stone House using a kettle once owned by the Braun family.

Stephen and Kristen Dickinson heard about the event on Facebook, and decided to drive down from Mooresville with 2-year-old son, Chase.

The couple watched Hirst poke at the reconstructed oven, using a hook to pull out pans of cookies, cornbread and tarts. Nearby, a chicken in a wicker enclosure clucked away.

“We thought it’d be cool to check it out,” Kristen said of the event.

Aaron Kepley, executive director of Rowan Museum, said a Facebook post advertising Germanfest managed to reach 30,000 people. An hour after the event’s opening at 10, the parking lot for the Old Stone House was full and people were lined up outside the entrance, waiting to get in.