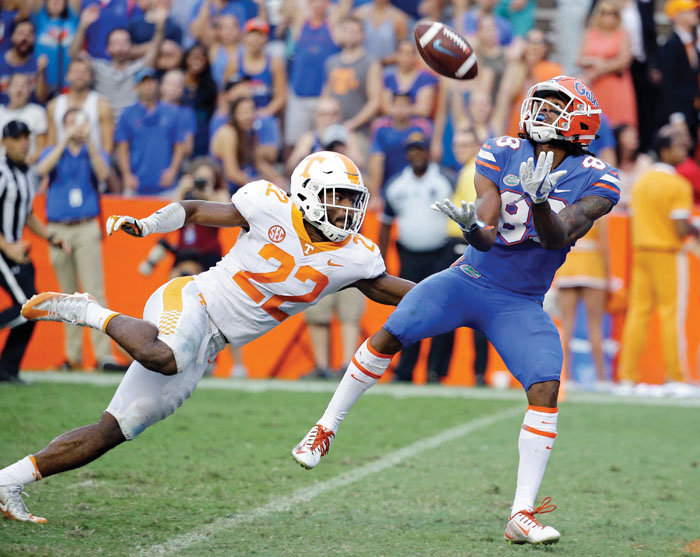 Franks scrambled away from the rush on a first-and-10 play with 9 seconds remaining and found Cleveland behind safety Micah Abernathy for a Hail Mary that no one — especially the Volunteers — saw coming.

The final play capped a crazy fourth quarter in which the teams combined for 37 points and little, if any, defense.

Tennessee (2-1, 0-1 Southeastern Conference) can blame three missed field goals for not being ahead late. The Gators (1-1, 1-0) looked as if they had the game in hand early in the final frame, but found a way to let the Volunteers get back in it.

Franks had one huge mistake — an interception in Florida territory that set up Tennessee’s tying field goal. The Vols had three plays from the 9, but failed to get in the end zone and settled for three points with 50 seconds left.

It looked for sure as if it was headed for overtime — and then Franks found Cleveland.

TUSCALOOSA, Ala. (AP) — Jalen Hurts passed for 248 yards and two long touchdowns and rushed for 103 yards to lead Alabama past Colorado State.

The Crimson Tide (3-0) dominated early and emphatically answered a comeback attempt before outlasting the Rams (2-2).

Hurts delivered his best all-around game of the season. He ran for a 27-yard touchdown and hit on a career-long 78-yard scoring pass to Calvin Ridley and a 52-yarder to Robert Foster.

Hurts completed 12 of 17 passes and mixed in 11 carries before leaving late in the third quarter. It was his second straight 100-plus yard rushing performance.

NORMAN, Okla. (AP) — Baker Mayfield passed for 331 yards and four touchdowns, and Oklahoma followed its impressive victory at Ohio State with a win over Tulane.

CeeDee Lamb caught four passes for 131 yards and two touchdowns before he was ejected for targeting on a block in the second quarter. Marquise Brown had career highs of six catches for 155 yards, including an 87-yard touchdown grab in the fourth quarter for the Sooners (3-0).

The Wolverines (3-0) didn’t lead by more than three points until Peoples-Jones’ touchdown early in the third quarter.

The Falcons (1-1) failed to convert a pass until Arion Worthman threw a short pass to Ronald Cleveland and the receiver turned it into a 64-yard touchdown play with 11:54 left in the quarter that pulled the service academy within three points again.

COLUMBUS, Ohio (AP) — Freshman J.K. Dobbins ran for 172 yards and a pair of touchdowns and Ohio State rebounded from a deflating loss to rout Army.

Dobbins broke away for an electrifying 52-yard touchdown run to open the second half after romping for 22 yards on the previous play, extending Ohio State’s 17-7 halftime lead. The Buckeyes (2-1) then got touchdowns on two of their next three drives to pull away.

Phillips had a program-record 14 catches for 189 yards to help the Hokies improve to 3-0 for the first time since 2011. He punctuated his day with a perfectly executed route that left him wide open, and Jackson hit him in stride for a 45-yard score with 7:46 left in the third quarter.

Both Jackson and Phillips called it a day before the fourth, as Virginia Tech roared out of a slow first-quarter start by scoring 57 straight points to turn this into a rout. That included 34 points and four TD throws by Jackson in the third quarter alone.

Gardner Minshew threw for two scores for the Pirates (0-3).

FORT WORTH, Texas (AP) — Jalen Reagor made a leaping 38-yard catch between four defenders in the end zone on the last play of the first half, finally putting TCU ahead to stay against upset-minded SMU.

The Mustangs (2-1) led 19-7 before Kenny Hill threw three TD passes in the final 7 1/2 minutes of the second quarter. The last was Reagor’s catch in a crowd of Mustangs.

Darius Anderson ran for two touchdowns for TCU (3-0) in the second half, including the first drive after halftime. Speedy running back Kenedy Snell also scored twice, while Hill completed 24 of 30 passes for 365 yards and four touchdowns.

Snell had a 10-yard TD run and later turned a short pass into a 71-yard sprint to the end zone. That long score put TCU up 21-19 with 2:40 left in the first half. Snell and Reagor are both true freshmen from Waxahachie, less than an hour from the TCU campus.

Washington State (3-0, 1-0 Pac-12) was coming off a triple-overtime victory over Boise State.

Falk, the FBS active leader with 98 touchdown passes, completed 37 of 49 passes for 396 yards without an interception. Martin had 10 vatches for 194 yards.

Jake Luton threw for 179 yards for Oregon State (1-3, 0-1), but was carted off the field in the fourth quarter with an injury. The Beavers have lost 14 consecutive road games dating to 2014.