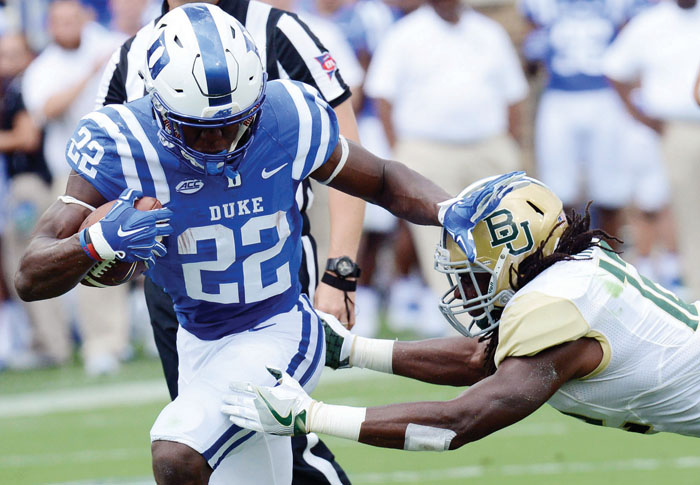 DURHAM (AP) — Duke could have scrapped the ground game as Baylor kept dialing up exotic blitzes and unexpected defensive fronts.

Instead, the Blue Devils kept handing the ball to Shaun Wilson and Brittain Brown.

Wilson rushed for 176 yards and scored on runs of 50 and 65 yards to help the Blue Devils (3-0) open with three consecutive victories for just the second time since 1994.

“One of the things that happens in the run game against multitudes of stunts, pressures, is you have to just keep calling it,” Duke coach David Cutcliffe said. “Sometimes the tendency is to get away from it when you get stopped for one or two or three yards. But what will also happen is what we saw Shaun Wilson do.”

Brown added a 34-yard TD run, Ben Humphreys returned an interception 22 yards for a score — one of four turnovers forced by Duke — and Austin Parker kicked two field goals, including a career-long 45-yarder.

The Bears seemed determined not to let Daniel Jones beat them: Jones was 20 of 35 for 184 yards but was sacked five times and was held without a touchdown for the first time this season.

Sophomore Zach Smith was 12-of-34 for 263 yards in his first start of the season for Baylor (0-3) with three touchdowns — including two long ones to Chris Platt. Smith connected with Platt on scores of 73 and 79 yards, after hitting Denzel Mims with a 44-yard score.

But his third interception — the pick-six he threw directly to Humphreys — came at a bad time, with the Bears trailing by three points early in the fourth quarter.

“Offensively, just not a good day all around,” Baylor coach Matt Rhule said. “Platt obviously had a couple of big plays that enabled us to stay in the game.”

The Bears are off to their worst start since the 1999 team opened with four straight losses on its way to a 1-10 finish in Kevin Steele’s first season.

The game wasn’t quite the 80-20 victory the Tar Heels (1-2) handed the Monarchs four years ago, but seemed to have the potential for that as North Carolina took a 39-7 lead at halftime.  The mistake-prone Monarchs’ only points in the half came on a 100-yard kickoff return by Isaiah Harper.

North Carolina scored three touchdowns, each on a drive lasting under 2 minutes, in a span of 4:12 in the second quarter.

With students streaming for the exits before halftime, Old Dominion (2-1) turned to 17-year-old freshman Steven Williams Jr., at quarterback. The lefthander used a 19-yard run to set the Monarchs up at the UNC 5, but fumbled the ball away two plays later.

In the second half, two pass interference calls against North Carolina aided a drive to Nick Rice’s 48-yard field goal.

Williams later hit Travis Fulgham for a 71-yard touchdown. He hit Hasaan Patterson for an 18-yard touchdown with the game long since decided.

Surratt, showing no signs of the injury that sidelined him for the second half last week, was 16 of 24 to 257 yards.

Jordon Brown ran for 125 yards and he and Michael Carter each ran for two touchdowns.

He felt dramatically different on Saturday.

The 6-foot-1, 200-pound senior threw for 242 yards and two touchdowns and ran for another score as the Demon Deacons dominated Utah State 46-10 to start 3-0 for the second straight season.

“They have surrounded me with some really good skill (players) now, but the big jump is the offensive line,” Wolford said. “Three years I got drilled a few times. I don’t want to knock the O-line back then but I remember coming off the field hurting. … This is the best I’ve felt after a game in a while.”

Utah State coach Matt Wells said Wake Forest is a much improved team since the Aggies beat them 36-24 in 2014 when the Deacons fielded an offensive line consisting mostly of underclassmen.

“The biggest improvement I’ve seen from these guys is in the trenches,” Wells said. “They got experience now. They’re strong and they’re big.”

Arkeem Byrd had 120 yards rushing including a 59-yard TD scamper and Tabari Hines had a career-high 129 yards receiving for the Demon Deacons. It’s the first time in six years Wake Forest has had a 100-yard rusher and receiver in the same game.

Wake Forest led 30-0 at halftime after outgaining the Aggies 397-77 in the first half.

Demon Deacons coach Dave Clawson liked what he saw from this team all around.

“We’re better since we went to Utah State a few years ago,” Clawson said. “Three years ago we were totally dominated on the line on both sides of the ball and they had more explosive plays than us. We’ve gotten better.”

Wake Forest seized the momentum early as Cameron Glenn intercepted a Kent Myers pass on Utah State’s first possession and returned the ball 43 yards for an apparent touchdown. The play was called back for an illegal block, but it didn’t matter as Wolford hit freshman Greg Dortch on a slant route on Wake Forest’s first offensive play for a 43-yard touchdown.

Wake Forest’s defense  limited Utah State (1-2) to 1.98 yards per play in the first half and Boogie Basham recorded a safety.

KNOCKED OUT: Myers was 9 of 23 for 54 yards before being knocked out of the game in the third quarter when he was hit on the return of a pooch punt. Wells said he “got dinged” and is uncertain if he will miss any time moving forward. Jordan Love replaced Myers and threw a 75-yard touchdown pass on his second throw.

RALEIGH (AP) — With its offensive line back at full strength, North Carolina State flexed its muscle.

“We didn’t run the ball the first two games like we wanted to, like we’re capable of,” Samuels said. “We just let it loose today. We knew that if we executed and everyone did their assignments, they couldn’t stop us.”

Ryan Finley passed for 231 yards and a touchdown for N.C. State before sitting out the fourth quarter with the game in hand.

Nyheim Hines rushed for 92 yards and a touchdown and added a 50-yard kickoff return that set up a score for the Wolfpack.

N.C. State was bolstered by the return of right tackle Will Richardson, who started after serving a team-issued suspension for the first two games of the season.

“It was good to have our starting five offensive linemen back together,” N.C. State coach Dave Doeren said. “I like the way we attacked.”

Andy Schumpert had four catches for a career-high 107 yards and a touchdown for Furman (0-3).

Furman remained winless under first-year coach Clay Hendrix, who started on the offensive line for the Paladins in victories at N.C. State in 1984 and ‘85.

The Wolfpack scored touchdowns on four of their five possessions en route to a 28-13 lead at halftime. They followed with three touchdowns, including a 47-yard interception return by Shawn Boone, in a six-minute span in the third quarter to blow open the game.

After the touchdown made it 35-25, Charlotte got a long kickoff return and Hasaan Klugh hit Workpeh Kofa for a 44-yard touchdown on the next play. The 49ers missed the extra point and the Aggies recovered the onside kick.

Lamar Raynard threw for 259 yards, including a 17-yard touchdown pass to Malik Wilson, and Marquell Cartwright’s second touchdown run put the FCS Aggies (3-0) up 28-10 early in the third quarter.

Klugh had three touchdown passes and ran for a touchdown but was intercepted twice, both by McCain, and was sacked seven times.

supposed to do, handling an overmatched opponent from the Football Championship Subdivision. Still, they need to clean up their mental mistakes. A silly roughing-the-passer penalty on Bradley Chubb kept alive Furman’s first drive, resulting in a field goal, and a busted coverage left Schumpert alone for a 71-yard touchdown catch. “We’ve got to be on our game because next week the bullets start flying for real,” Boone said.

The return of Richardson, a redshirt junior, gave the Wolfpack added experience up front. N.C. State had given one start apiece to redshirt freshmen Joe Sculthorpe and Justin Witt during his absence. Richardson’s presence allowed Terrone Prescod, who started last week against Marshall at right tackle, to move back to left guard.

“With Will in there, it’s a big difference,” Samuels said. “The holes open up wider, he knows what he’s doing, and he’s playing fast.”

N.C. State starting cornerback Mike Stevens missed his third consecutive game after suffering a knee injury during training camp. Doeren said that Stevens could have played and that he sat out because the coaches didn’t want to expose him to Furman’s cut blocking. “He’ll be out there next week,” Doeren said.

FURMAN: The Paladins hit the road for the third time in four weeks, playing at Colgate on Sept. 23.

N.C. STATE: The Wolfpack open Atlantic Coast Conference play with one of their biggest games of the year, a trip to No. 11 Florida State on Sept. 23.