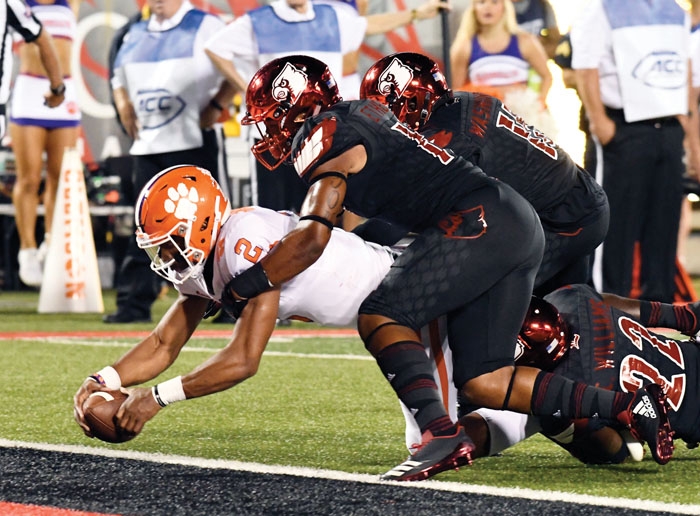 Clemson quarterback Kelly Bryant (2) is brought down by Louisville's Dorian Etheridge, front right, and Trumaine Washington (15) as he crosses the goal line during the first half of an NCAA college football game, Saturday, Sept. 16, 2017, in Louisville, Ky. (AP Photo/Timothy D. Easley)

Jackson passed for 317 yards and three TDs, but most of that came with things already in hand for Clemson (3-0, 1-0 ACC). The Tigers’ Dorian O’Donnell returned an interception 44 yards for a TD and a 26-7 third-quarter lead, and they sacked Jackson four times. Bryant, meanwhile, won the QB battle with TD runs of 8 and 1 yards sandwiched around a 79-yard scoring pass to wide-open Ray-Ray McCloud in the second quarter.

Jackson had TD passes of 11 yards to Charles Standberry, 36 yards to Jaylen Smith and 8 to Dez Fitzpatrick. But the junior struggled to throw and run all night for Louisville (2-1, 1-1 ACC). The Cardinals were outgained 613-433, saving face somewhat with a 14-point fourth quarter.

Clemson: After three wins over the Cardinals by 15 combined points, the Tigers left no doubt this time. Questions about the offense after a 14-6 win over Auburn were effectively answered with their second 40-point effort in three games, this  against a ranked opponent. Bryant had time to find receivers that were frequently open, particularly on the long TD against busted coverage that sapped all the energy in the hostile environment dressed in black. The defense yielded 433 yards, but it didn’t matter after doing its best work in the first three quarters.

Louisville: A game-tying drive in the first quarter was the Cardinals’ only bright spot on a night nothing worked. As bad as things were for Jackson, it’s much worse for their defense. They yielded at least 500 yards for the second time in five games dating back to last season and failed badly in their quest to not only avenge last year’s 42-36 loss to the Tigers, but prove they could be an ACC contender.

Clemson: The Tigers’ impressive start continues, and could move them closer to the top.

Louisville: This blowout loss could possibly drop the Cardinals out of the Top 25.

Louisville: The Cardinals host Kent State on Sept. 23, looking to bounce back against a Golden Flashes team that Clemson routed 56-3 on Sept. 2.