A true calling: Don Heglar delivers a host of birthday greetings via phone 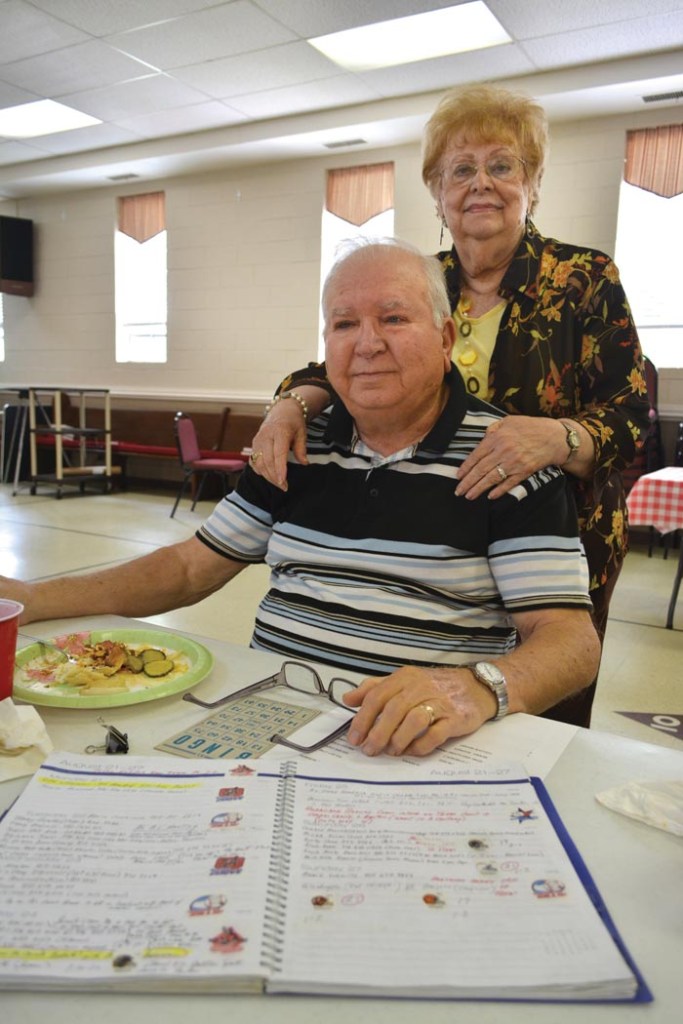 Don and Frances Heglar have been married 55 years. Don calls 856 people a year on their birthdays. When he had eye surgery, Frances dialed the phone so he could still extend birthday greetings.

Just about every day of the year, Don Heglar looks at his calendar, and picks up the phone. The greeting is always the same.

“Happy Birthday to you,

Happy Birthday to you,

Happy Birthday to you.”

All told, Don sends birthday wishes to 856 people during the year.

Read that again. EIGHT HUNDRED FIFTY-SIX. I know what you’re thinking. “But I don’t know 856 people.”

Well, Don probably didn’t either when he started making these calls, shortly after he retired in 2000. So he started collecting phone numbers wherever he went. At the doctor’s office. At restaurants. At Patterson Farm, where he and wife Frances are seasonal workers. In the produce department of the grocery store.

“He calls me, he calls my husband, and he calls my girls,” Michelle Patterson says. “He’s just the sweetest. You feel like you get a special gift.”

“It started with the people at church,” says Don, 78. “And with people I met, I just struck up a conversation, and one thing led to another.”

And he’d make a request: “Would you mind giving me your name and phone number and I’ll be glad to call you on your birthday?”

More often than not, people have said yes.

Don and Frances are members of the Happy Club at St. Mark’s, a longtime senior group. One of those members is Colleen Weant, who at 90 has shrunk to no bigger than a minute.

“Whenever the Happy Club goes on a trip, he always gives the waitress his card,” Colleen says, stretching out her hand. On one side are printed bold words “My Card.” On the other, Don has signed his name.

“He never misses my birthday,” Colleen says, smiling. “He calls my grandchildren, Karen and Nathan.”

Don and Frances have three daughters. Their oldest daughter is Tammy Gentle, 54, (her birthday is Aug. 22) and their twins Donna Walls and Debbie Efird, turned 52 on Friday. Don says he calls whichever twin he gets on the line first. No particular order, although Donna has always been fond of pointing out that she’s five minutes older than Debbie.

Over the years, their brood has grown to include seven grandchildren and five great-grandchildren with two on the way. Don calls them all.

On Sept. 6, Don and Frances, 77, celebrated their 55th anniversary.

“He makes calls every day,” Frances says. “Very rarely does he have a day without a birthday. Through the years, we’ve met a lot of people. And we’ve made some real good friends.”

Don is outgoing, his wife says. “He don’t meet strangers.”

It wasn’t always that way.

“When we first got married,” Don says, “I wanted to stay in the background. I let Frances do all the talking.”

“Then she said, ‘Now you get in here and start talking. Start with the weather. That will lead into other things.’”

“He talks all the time now,” Frances says.

Don has had corneal transplants, and when he couldn’t see the numbers on the phone, Frances would dial and he’d do the talking. You could say that extending these birthday wishes is a ministry — a true “calling,” as it were.

Don chuckles and considers that.

“I really never thought about it that way,” he says modestly. “It’s just something I enjoy doing.”

Once he puts someone on the list, he never removes them, unless they die. That’s why he calls the girls’ ex-boyfriends or ex-spouses. Once, he even called a wrong number.

“Every year, I’d call this number and no one would never answer,” Don explains. “This lady called me one day and said, ‘This is not my name and it’s not my birthday, but would you please call me on my birthday?’”

“I still call her every year,” Don says.

Out of the whole year, he says, he has about 10 days with no birthdays. His busiest month is September, and his lightest month is October. Every year, he hand writes all the names and numbers on an 8½ by 11 daily calendar. If it’s a person he doesn’t know well, he makes a little note as to who they are.

“Sometimes I’ll think, now who in the dickens is this, so I usually put a little note to remind me,” Don says.

He calls Bob Timberlake on Jan. 22. The two went to the Boy Scout National Jamboree together in 1953.

“I usually call the gallery and leave a message,” Don says. “I guess they pass it on.”

The daily calendar is also a diary of sorts. Don keeps up with any unusual weather. On Jan. 30, Wild Bill Corriher killed pigs. On Feb. 25, he noted the Super Bowl score. Frances’ birthday is June 27.

“He’ll get up and sing to me in the morning,” Frances says. “One time he did call me at home on my cellphone. He was in the garage and I was in the house and he called me. I said, ‘Thank you!’”

“He’s had a few days he didn’t feel on top of it,” Frances says, “but he still made the calls.”

And once in awhile, if something unusual happens and he doesn’t get his calls made — sometimes, he just forgets — he’ll call the very next day to wish you a belated birthday.

“That’s better than nothing,” Don says.

But that’s a rare occurrence.

A lot of people ask him why he makes all those calls.

“To me, a birthday is just as good as Christmas,” he says. “This is something you oughta be proud of, that you’ve got another birthday. Age is often a privilege denied to many.”

Don’s birthday is Jan. 4, and yes, he gets quite a few calls himself.

“This has been an ongoing thing for year and years,” Donna says. “It gives him so much joy to make someone else’s day. He wants to make sure they’re not forgotten on their birthday. It’s part of his day. He has his prayer time, and he has his phone time. It’s just part of what he does.”

Every year for Christmas, Donna gives him a new calendar. And she keeps having to buy bigger and bigger calendars, she says. She’s offered to put it all on a spreadsheet, but he’s having none of that.

“He says, ‘No, I just want them written down,’” she says. “It’s an astronomical task to transfer the numbers to the calendar. But he enjoys writing it down and organizing it, and it keeps him on his toes. He takes this task so seriously. If we go on vacation, he takes his book with him, and he’ll go off to the side every day and call his people.”

He’s already asked his daughters which one of them will take his calendar when he’s gone. Donna says they may divide it among the three of them. But that day will be a long ways off.

Still, Donna says, it’s a legacy that she and her sisters want to continue. “It’s a nice tradition to keep alive.”