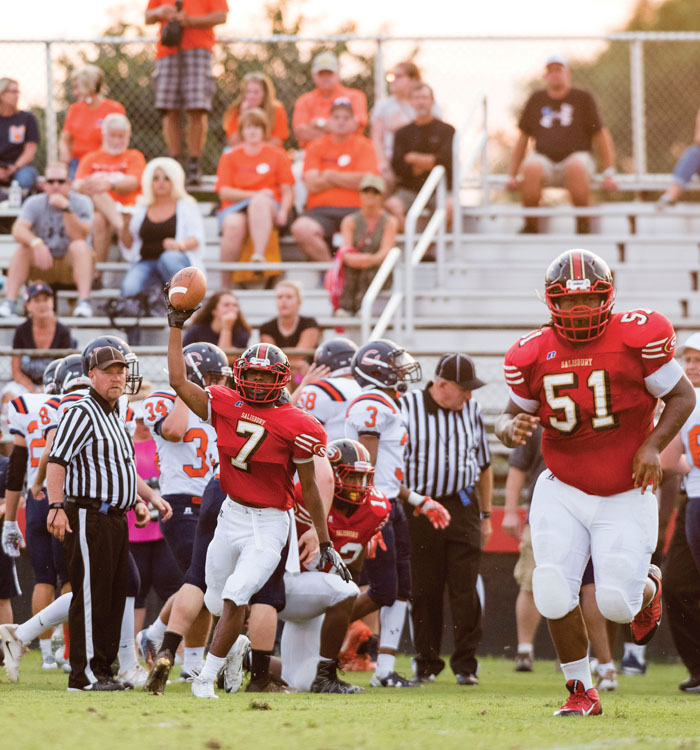 Stopping the Hornets on their initial drive was just about the lone bright spot for the Green Dragons as Salisbury raced out to a 22-0 first quarter lead en route to a 46-0 victory.

In the first half, the Hornets ran all over Charles Elmore Field to the tune of 304 yards of total offense. Salisbury scored on drives of 25, 71, 56, 60 and 85 yards, sandwiched by a 70-yard Trell Baker punt return for a touchdown, as the Hornets left no doubt early on who would win this game.

“It is tough to catch Salisbury,” West coach Bryan Lingerfelt said following the loss. “Overall team speed is a lot better than us. We knew that and it was the first time our guys had experienced that kind of overall team speed.”

Baker’s punt return touchdown epitomized West’s struggles to contain Salisbury’s speed. After being bottled up at the 30-yard line, Baker scampered around looking for a hole and burst through the middle of field, easily outrunning West defenders to the end zone.

The speed differential was evident in all three phases of the game as the Hornets blitzed West for big scoring plays on offense while racing by West’s offensive line for big plays on defense and special teams.

The first Salisbury score of the night, a three-play drive capped by a 7-yard Michael McLean touchdown run, was set up by a blocked Houston Berrier punt to give Salisbury the ball at the West 25-yard line, on its second possession of the game.

With one long touchdown already to the Hornets’ credit, quarterback Griffin Myers hooked up with Cameron Gill for a 69-yard touchdown throw in the second quarter that pushed the Salisbury lead to 36-0.

The Green Dragons trailed, 43-0, after Baker hauled in a Myers pass across the middle of the field, broke a tackle and raced down the near sideline for a 72-yard touchdown catch and run. The score was Baker’s second 70-plus yard touchdown of the half and triggered a running clock at Glosson Stadium.

The other two Salisbury first half touchdowns came on a 10-yard Myers to Tyrone Johnson scoring strike in the first quarter and a Raheim Walker 32-yard touchdown run in the second period.

The final score of the evening came on a 26-yard field goal by Jack Fisher with 5:43 left in the third quarter.

West’s Caylen Watson, a 5-7 receiver, was about the only player for the Green Dragons that could consistently fly with the Hornets. Watson averaged 26 yards on three kick returns and had a 91-yard would-be kick return touchdown negated on offsetting penalties in the second quarter.