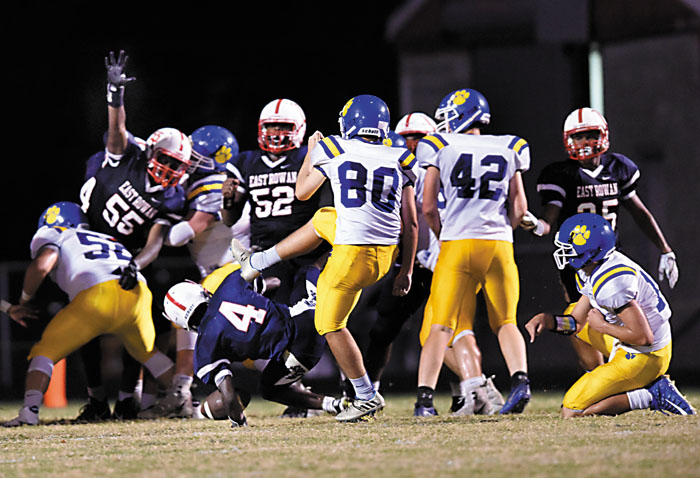 GRANITE QUARRY  — On a warm September night, the last thing a big crowd at East Rowan expected to see was a snowball, but that’s what they got.

Coaches, whether it’s football, baseball or basketball,  use “snowball” frequently. It means things, generally bad things, accumulated rapidly and uncontrollably, like a ball of snow rolling down a hill.

“The start we had tonight is definitely not the way we drew it up,” East coach John Fitz said. “The guys were coming off an emotional game (at Central Cabarrus) and we just went out and laid an egg.”

East got avalanched, 50-8, by visiting Mount Pleasant on Friday, and the game was over after nine snowballing, free-falling minutes. At that point Mount Pleasant led, 22-0, and it was just a matter of how ugly it would get. East was shell-shocked and demoralized.

“Adversity is going to come and you have to face up to it,” East linebacker Christian Bennett said. “It was a very slow start for us tonight, and we needed to fight back a lot harder than we did.”

Prior to the season,  Fitz had his son, Jax, a junior known more for baseball, penciled in as a receiver and defensive back. But Jax also was listed as the backup quarterback on a relatively thin roster. He had enough speed and grasped the offense well enough to fill in, if an emergency situation arose, but his last serious reps at QB before this week came came during the scrimmages.

Justin Smith. who started for East most of 2016 and in the first four games this year, wasn’t available Friday and may not be back. So Jax Fitz’s debut as the starting quarterback came in less than ideal circumstances, against one of the better 2A clubs in the state.

“Coach (Michael) Johns does a great job with his guys, and I’d say Mount Pleasant is top 10 in the state in 2A and definitely top five in the West,” Coach Fitz said. “It was a tough situation for Jax. making his first start with limited reps. I never envisioned Jax being our starting quarterback, but right now he’s our best option, our only option. Our offense is all about making the right decisions. He can do that.”

East’s second snap was a full-blown train-wreck. Fitz took a shotgun snap, darted left, and was quickly in all kinds of trouble. When he tried to pitch the ball as he was smashed, it squirted into the air and came down in the waiting arms of  Mount Pleasant linebacker Hayden Radford.

“Just a really bad decision there on the option,” Coach Fitz said. “There was some nervousness early.”

Radford’s return set up a quick score by hard-nosed back Garrett Overbay. Robert Tyler, whose nose is even harder than Overbay’s, chugged for a 2-point conversion. It was 8-0 barely a minute into the game.

After an onside kick recovery and a 41-yard strike by QB Chance Daquila to long-striding receiver Landon Parker, the Tigers were knocking on the door again. Daquila scored on a 2-yard sneak. The visitors led the reeling Mustangs, 15-0, after six minutes.

It got worse. Another East turnover led to a 17-yard TD gallop by Landon Honeycutt, who didn’t get touched by defenders. Mount Pleasant’s offensive linemen scattered defenders like bowling pins, and Honeycutt simply traveled the open road. It was 22-0.

Mount Pleasant scored three more touchdowns in the second quarter, with Parker hauling in a scoring pass before he left Mustangs eating his dust on a 67-yard punt return. It didn’t look like a great decision to pick up a bouncing punt with traffic approaching, but Parker found the right sideline and his wheels made it work out fine for the Tigers.

Mount Pleasant (4-1) made it 40-0 on a methodical drive at the end of the half. The ferocious Tigers seemed almost bored at that point, but they got a timeout with two seconds left, and Noah Berryman punched in a TD to send the Mustangs (2-3) to the locker room in a bad mood.

Fitz, the QB, settled down a lot in the second half, ran the option smoother and kept the ball a few times for decent gains. Sam Wall, who had a TD called back in the first half due to a block in the back, took a well-executed, quick-hitting dive play to the house from 34 yards out to get East on the board late in the third quarter. Zack Simpson tacked on a 2-point conversion.

The running clock brought the night to a hasty conclusion. Evan Devitto kicked a field goal for the Tigers for the only points of the final quarter.

“The thing about Mount Pleasant is they only run three or four plays,” Coach Fitz said. “It’s not like we didn’t know what they were going to do, we just stop them. They blocked really well.”

East will try to bounce back next week at Northwest Cabarrus, one of the state’s most improved teams.