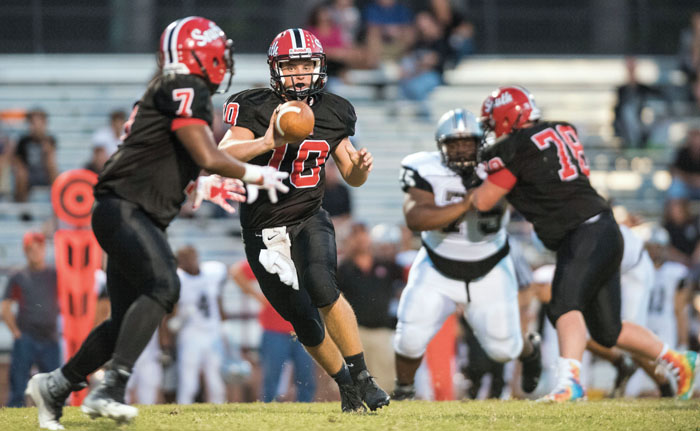 LANDIS — Sometimes numbers can be deceiving. The South Rowan Raiders played visiting Ledford to a virtual statistical dead heat Friday night, but where it counted the most, the Panthers prevailed on the scoreboard, 37-14.

It was the first-ever meeting between the Raiders and the Panthers in the newly revamped Central Carolinas Conference with the visitors taking control in the first half with 30 points. Panther quarterback Matthew Rogers passed for three touchdown and ran for another to put his team comfortably ahead with a strong first half. South (0-4, 0-2 CCC) posted 298 total yards and 17 first downs while Ledford (3-1, 2-0 CCC) had 308 total yards and 16 first downs.

The difference was obvious as Ledford converted their yardage into a lot of points and the Raiders did not.

“It is frustrating,” South coach Daniel Yow noted, “but kudos to our offense for moving the ball tonight. We are getting yardage but we have got to take the next step and put points on the board … just get out of our own way and score some points. We have a lot of things to work on but I am proud of our kids for not giving up all night.”

South put itself in a hole right out the gate when they gambled on their opening series on a fourth and one at their own 29. Quarterback Brett Amburn’s pass was batted down by Panther defender David Wetherington. Two plays later, quarterback Rogers cut up the middle on the keeper for a 7-0 early lead.

“It was my call to make and I made it,” Yow said of the early gamble. “My philosophy was I wanted to establish our offense early. They just made a great play on the ball and batted it down.”

Ledford made it 14-0 later in the first quarter after a short punt when Rogers found Mason Conger over the middle for a 17-yard TD strike.

Early in the second period, Ledford and Rogers used a big play to score again. Receiver Walker Lackey caught a jump pass over the middle and broke free for a 45-yard scoring play to make it 21-0.

South responded in a big way on the next series thanks to the combo of quarterback Brett Amburn and receiver Marquis Rhyne. Amburn, who passed for 198 yards on the night, found Rhyne with a high spiral at the Ledford 10. The senior receiver out-jumped a defender for the catch and dragged his man into the end zone to complete a 44-yard scoring play. The extra point was blocked but South was on the board, 21-6, with 4:55 left in the half.

“Actually it was a perfect pass and perfect placement by my quarterback (Amburn).” Rhyne stated. “I can’t take credit for that play because he put it in the right place. I just happened to finish with the TD.”

What should have been a momentum shift for South did not last very long. The Raiders forced a punt.

But Ledford’s Hunter Braswell booted a perfect 41-yarder that was downed at the South one. On the next play, cornerback Graham Mabey nailed South’s Demarcus Blackwell in the end zone for the safety and a 23-6 lead.

On the ensuing free kick, Ledford used a 35-yard return by Lackey to set up shop at the South 35. Six plays later, Wetherington rammed in from the two and the score was suddenly 30-6.

When Ledford took the opening kickoff in the second half and put together a time consuming 66-yard drive, the game was well in hand. Rogers capped the drive with his third scoring pass, a 16-yarder to Robert Little.

South kept putting up yardage but could not convert until late in the game. Twice in the second half, Ledford stopped the Raiders on downs to halt scoring threats.

The Raiders finally found success with under two minutes to play thanks to the efforts of workhorse running back Blackwell. He capped a 17-carry, 59-yard night with a three-yard plunge. It was his first varsity touchdown and after Blackwell added a two-point conversion run it was 37-14. Blackwell was fine with his heavy workload for the night but wished the team could have converted more points.

“I like to do whatever the team needs me to do, getting the first down or whatever,” Blackwell said. “We stopped ourselves a lot tonight but my offensive line really stepped up and allowed me to gain a lot of positive yards.”

South has to face North Davidson and West Rowan in the next two weeks so the road does not get any easier but Yow feels his team is making good progress. “We’re okay and we will continue to work hard and keep moving forward,” Yow said.

Slot receiver Corey Sellers came into the game averaging about 27 yards per carry and could not maintain that pace. He did put up 80 yards on eight carries and caught three passes for 33 yards to continue his impressive season.