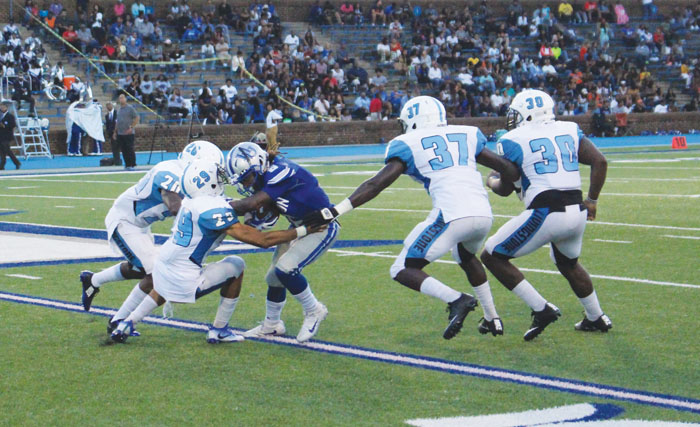 HAMPTON, Va. — There were no surprises here at Armstrong Stadium on Saturday night.

Hampton, an FCS-level, Division I team, trounced Livingstone, 59-0. The Blue Bears, a Division II squad, were playing up and were totally dominated by the Pirates.

Hampton back-up quarterback Brendan Greene threw for three touchdowns and ran for one, after starter Delmon Williams passed for a touchdown in the first quarter and led two other scoring drives.

Running back Yahkee Johnson scored two first-quarter TDs on the ground and then opened the second half with a 73-yard touchdown gallop.

Meanwhile, the over-matched Livingstone offense could muster nothing early on. The Blue Bears (0-3) had less than 50 total yards in the first half and was constantly backed up deep in their own territory.

Livingstone’s deepest first-half penetration was to the Hampton 49-yard line.

In the second half, quarterback Xavier Longerbeam relieved starter Thaddeus Bell and led a drive to the Hampton 46-yard line, before turning the ball over on downs.

In the fourth quarter, Livingstone freshman linebacker Michael Oakley recovered a fumble at the Hampton 20-yard line — the Blue Bears’ best opportunity for a score. However, running back Semaj Williams fumbled the ball right back on the next play.

As Hampton began clearing its bench, Longerbeam and Livingstone finally began to move the ball some in the fourth quarter. Longerbeam ended with seven completions for 45 yards. Running back Justin Ruffin, a former Salisbury High star, led the Blue Bears’ rushing with 17 yards on 11 carries.

Johnson led the Pirates with 132 yards rushing and three TDs. He averaged 11 yards per carry.

The Blue Bears begin CIAA play next week, traveling to Chowan (0-3) on Saturday for a 6 p.m. contest.