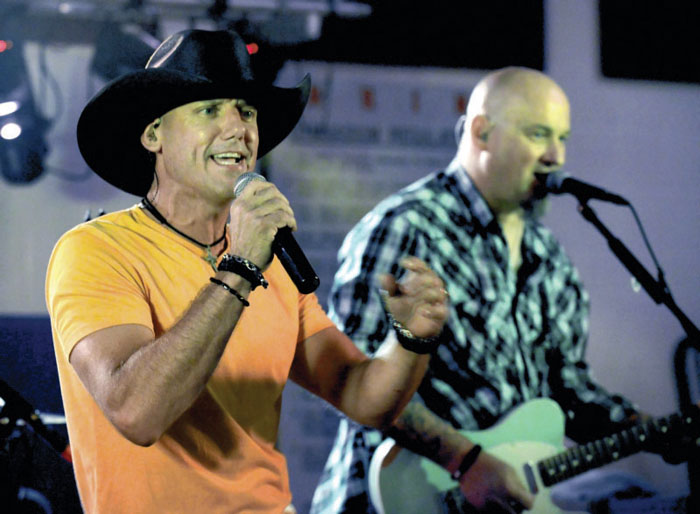 Darrell Harwood and band member Eric Upton along with the rest of the band entertain the Special Olympics. Wayne HInshaw/For the Salisbury Post

CHINA GROVE — Projecting a crowd of thousands, the town will play host to a music festival Sept. 23 that will feature Darrell Harwood as the headliner and raise money for cancer treatment.

Featuring food, music and other entertainment, the Stand Together Music Festival will kick off at 2 p.m. next Saturday. The festival will feature Too Much Sylvia, Soakin’ Wet, Carmen Tate, Red Dirt and Harwood, a China Grove native and country music singer. All money raised will be donated to the Leukemia and Lymphoma Society.

Festival organizers hope to raise $30,000. They have already raised some money through sponsorships.

For Harwood, Saturday’s festival is more than another show. Several members of his family have been diagnosed with cancer, including Harwood himself.

Doctors diagnosed Harwood with melanoma in 2012. The cancerous spot was located on his left leg and he had it removed. Harwood’s father, mother-in-law and brother-in-law have also been diagnosed with cancer.

“I’ve always worked for Relay for Life every year, and I thought I would try to do my own fundraiser,” Harwood said. “I decided to choose something that’s affected most of the people in my family.”

Harwood said he decided to hold the festival in China Grove because it’s his hometown.

Admission is free but Harwood said donations will be appreciated. Money will be raised through T-shirts, which are $10; donations at the gate; raffle tickets; and other items sold at the merchandise tent.

“We are going to rock it,” Price said.

Bands will start playing at 2 p.m. The schedule is as follows:

The music stage will be on North Main Street in front of the China Grove Town Hall and fire station. Between bands, cancer survivors or people affected by the disease will speak, including the 2017 winners of the N.C. Leukemia and Lymphoma Society’s girl of the year and the national man of the year.

Speakers include Jared Rooks at 3 p.m., Ava Reece at 4:30 p.m., and Mia Furrer at 4:45 p.m.. Other speakers are National Man of the Year Scott Peterson, N.C. Girl of the Year Ally Davis; and Preston Davis.

A “kids’ zone” will sit on East Ketchie Street, near the stage. To enter, children will need a $5 armband.

In the parking lot of the China Grove Fire Department will be sponsor booths, a bone marrow testing tent, a pink firetruck, and food venters. Price said choices for food would include hot dogs, hamburgers and barbecue.

A beer garden will be located in front of the China Grove Roller Mill.

A mammogram unit will be at the intersection of Park and North Main streets.

North Main Street will be closed from West Ketchie to Swink streets during the festival.

Price said dogs will not be allowed at the festival. Price said people will need to bring their own chairs if they want to sit.