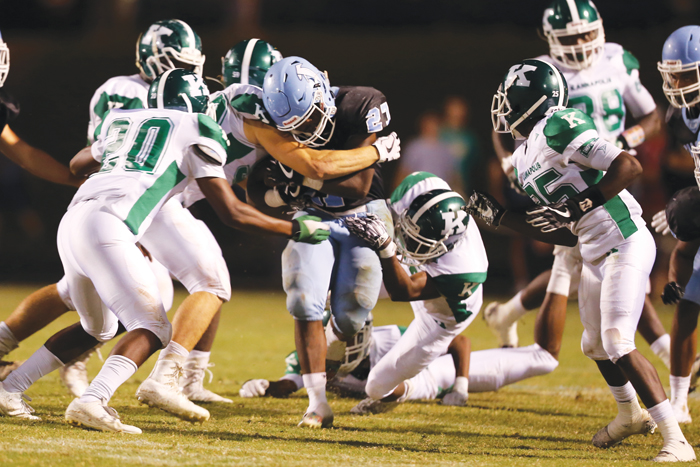 James Sipes/for the Salisbury Post ... West Rowan running back Martavio Rankin (27) lowers his head and plows through the center of the line against A.L. Brown on Friday night in Mount Ulla. The Wonders pulled away and won, 31-7.

MOUNT ULLA — It was supposed to be one of those statement games for West Rowan — a chance to regain form and measure itself against a formidable opponent.

“I don’t know,” disappointed coach Joe Nixon said after West’s defense yielded 303 rushing yards. “They’re just a good team. I thought our kids kept us within striking distance, but Kannapolis just made a lot more plays that we did.”

The Wonders (4-1, 3-0 on the road) played China Wall defense, limiting West (1-3) to 206 total yards — nearly a hundred below its season average. And though the Falcons took 31 snaps in the Wonders’ territory, it reached the end zone only in the second quarter, when quarterback Payne Stolsworth threaded a 20-yard touchdown pass to sophomore Jalen Houston.

“We’re a dominant team with a dominant defense,” two-way lineman Malachi Lyles said after the Wonders huffed and puffed and blew West’s house down. “Any team that wants to beat us has to beat our defense.”

West twice failed that test in the opening period. After A.L. Brown drove 68 yards on eight plays and took a 7-0 lead on Nick Lyerly’s short TD burst to start the game, the Falcons advanced to the visitors’ 32-yard line on their first possession. But the drive stalled when Stolsworth was chopped down in the backfield on a fourth-and-5 bootleg.

As the quarter ticked to a close, Stolsworth again steered the Falcons deep into A.L. Brown territory. Junior scatback Jalen Perry snapped off a 45-yard run to the 20 and consecutive runs by Martavio Rankin pushed the ball to the 11. West came up empty when a fourth-and-inches screen pass to Rankin lost five yards.

The second quarter provided more of the same. Following a fumble recovery by Baiden Suddarth, West took over on the Wonders’ 16-yard line, only to be foiled when Jayden Jones was thumped for no gain on fourth-and-1 from the seven.

“I think we missed like two or three fourth-and-ones,” Stolsworth said. “All in the red zone, too. That hurt a lot. If we convert those, it’s probably a different game.”

West was finally rewarded on its fourth possession, when Stolsworth and Houston hooked up for the fifth time this season. It tied the score with 7:45 remaining in the first half, but that’s when Brown quarterback Jordan Medley and his beefy offensive line began asserting their will. The Wonders took the ensuing kickoff and marched 70 yards for the go-ahead score — a 34-yard touchdown run by halfback Jalen Neal with 4:47 on the clock.

“Our power runs really worked to the outside,” Medley said after passing for 85 yards. “They opened up the post routes and opened up a lot of other things. Give credit to our offensive line. West is really tough team, but those guys on our line were even tougher.”

Those guys helped A.L. Brown drive two more touchdowns in the second half, the last when Neal skirted around the left side on a 5-yard sweep and into the end zone for the third time. “On offense, we wanted to break their DL,” said Lyles, a senior left guard. “We wanted to push them down field and put them on their butts.”

Houston, meanwhile, made five receptions for 69 yards but was well-defended in the second half. He had only one catch for 13 yards after the break. Stolsworth had an explanation.

“They started putting one defensive back in front of him on the line so he wouldn’t get a free release,” the QB said. “Then they’d put another DB behind him to help guard him. It was tough.”

So was Stolsworth’s night. He completed only four of 14 passes in the second half — including a pair to sophomore Ty’kese Warren on West’s too-late-to-matter final possession. But in his defense, he did face a steady diet of four- and five-man rushes throughout the game.

“They kept putting a lot more people in the box and blitzed off the edges,” he said. “We didn’t have enough protection up front.”

It was enough to keep the Falcons in over their helmets.