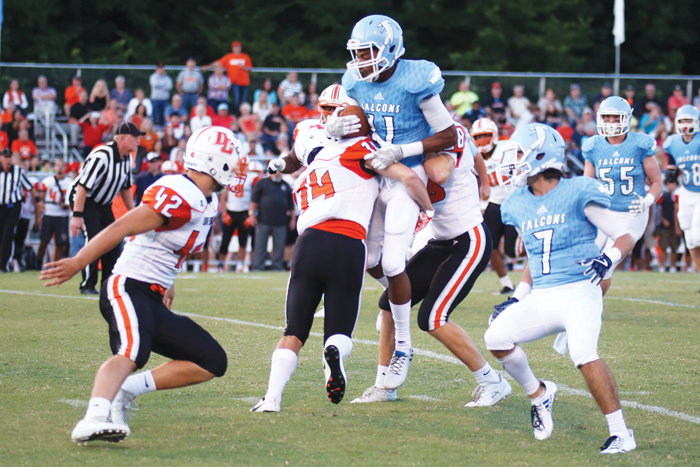 James Sipes/for the Salisbury Post West Rowan's Ty'Kese Warren (11) is picked up and stopped 2 yards short of a first down by the Davie County defense during last weekt's game. Davie won, 42-20.

Four of the five county teams in action tonight will be underdogs. If Salisbury, the only favorite among the county squads, doesn’t win on the road at West Davidson, the county might go 0-5.

The Rowan schools are a combined 9-12 after three weeks, but that includes six Rowan vs. Rowan matchups when someone had to win. Take away those six, and it gets a bit ugly. Rowan schools are 3-6 against teams outside the county.

East Rowan beat Central Davidson, which has lost 27 in a row. Salisbury beat Thomasville, which has plenty of tradition but is currently working on a four-game losing streak.  The best victory so far by a Rowan team was North’s miraculous comeback, from 24 points down, to beat Lexington.

West Rowan (1-2) has a losing record after three games for the first time in 16 years. West usually beats either Davie or Mooresville in its early games and usually starts 2-1 or 3-0, but that didn’t happen this time. Still, West is the best in the county. West easily won against North Rowan, and North Rowan owns a convincing win against Salisbury. There really aren’t any other candidates for best team in the county. East Rowan trailed 33-0 at Central Cabarrus last week. South Rowan has lost six straight. Carson hasn’t beaten anyone except South.

Some of what has taken place in the early weeks wasn’t totally unexpected. West Rowan and Carson faced really difficult non-conference schedules. That was obvious before the season started.

So what happens next?

Well, it’s not all gloom and doom. No matter what happens against A.L. Brown and Concord (the Spiders are next for the Falcons), West Rowan probably can contend for the North Piedmont Conference championship. South Iredell (4-0) has to be the favorite right now, but West has a chance.

In the 1A Yadkin Valley Conference, North Rowan, which is off tonight, has a shot at the championship, although that league might have three of the best 10 teams in 1A. North Stanly is good and could challenge North Rowan and West Montgomery.

Then there’s Salisbury, the one county team that is obviously better than last year. North Davidson looks like a good bet to dominate the Central Carolina Conference, but the Hornets should be an upper-tier team in that league. They’re headed for a winning season.

On to the pessimistic picks. The predictions were 5-1 last Friday and are 13-4 overall . The miss was on Davie County-West Rowan. I changed that pick on the page a half-dozen times before settling on the Falcons, who had the home field and a huge advantage in preparation time. Wrong again.

Last meeting: Salisbury rolled against the Green Dragons 42-10 in 2016.

Series: The Hornets lead 13-3 and haven’t lost to West Davidson since 2007. The Green Dragons were tough in that era and beat good Salisbury teams three straight years (2005-07).

Season to date: West Davidson’s victory was against South Davidson. The Green Dragons gave Ledford a scare last week, which indicates that they have a chance tonight if the Hornets turn it over. Salisbury has some momentum after whipping Thomasville in the second half last week.

What happens: As a rule, this is a matchup that proves the theory that speed kills.  Trell Baker and Tyrone Johnson are likely to make big plays for the Hornets.

Last meeting: In the 2005 3A state playoffs, the Wonders came to Mount Ulla for a third-round game and demolished a West Rowan team that entered the game with a 13-0 record. The final was 34-10.

Series: Wonders lead 14-1. West’s only win came in an amazing comeback in Mount Ulla in 2000. West scored 15 points in a matter of seconds with a touchdown-onside kick-touchdown combination to win 25-22.  Jared Barnette threw the winning TD pass to current North Rowan coach Ben Hampton with 1:18 on the clock.

Season to date: The Wonders were beaten at home by Marvin Ridge, they got easy wins against Hopewell and Carson and they rallied to beat Mooresville. West has lost to Mooresville and Davie. In between, the Falcons put it together and handled North Rowan.

What happens: Both teams have been better in the past, but these are still two good 3A squads. West is certain to use its standard game plan — stop the run, force the pass. A.L. Brown’s most consistent weapon has been strong running back Jaron Cooper. The Falcons will try to take him away, and make QB Jordan Medley put it in the air. The Wonders are an exceptional running team (300 yards per game), but if the Falcons can take them out of what they like to do, they have a chance. Offensively, West has been better throwing it than running it, and the speed of receiver Jalen Houston causes problems for every opponent. He had three TD catches last week.

Season to date: 2A Mount Pleasant is a top 100 and maybe a top 75 team in the state. The Tigers have gone 3-1 against four 3A Cabarrus opponents. The loss was against Concord last week, 15-14.

What happens: East generally plays much better at home and will have to, in order to have a chance tonight. East has beaten two teams it was expected to beat (Central Davidson, South Rowan) but didn’t play well on the road at North Stanly or Central Cabarrus. Mount Pleasant thrashed Central Cabarrus.

Series: This is the first meeting.

Season to date: Davie lost to North Davidson and Page but beat Mooresville and West Rowan. Carson opened with a narrow win against South Rowan, but has been hammered the last three weeks by Salisbury, A.L. Brown and North Rowan.

What happens: It’s hard to find any reason for Carson fans to be optimistic, even if all the Cougars were healthy. Davie got its passing game going last week, the Davie defense is stout, and Davie is bigger, faster and deeper. Carson is just trying to survive a brutal non-conference to get to some winnable conference games.

Series: This is the first meeting.

Season to date: Ledford hasn’t scared anyone so far, winning close ones against Randleman and West Davidson after losing on opening night to strong Glenn. South has lost to Carson, East Rowan and East Davidson and got blown out in the last two.

What happens: Ledford is dealing with some stuff. Assistant Chris Doby guided the team last Friday after the suspension of Chris Adams, a long-time Ledford coach who has enjoyed great success in baseball as well as football. The status of Ledford star Coleman Reich, a safety committed to UNC, isn’t certain. He’s not 100 percent with a leg injury. Those things might give South a chance to make a game of it, but it’s still an uphill fight against a physical program that produced former NFL fullbacks Brad Hoover and Madison Hedgecock. South head coach Daniel Yow was on the staff at Hickory Ridge for playoff games against Ledford, so he’s familiar with what Ledford is all about. Slotback Kory Sellers, QB Brett Amburn and running back Demarcus Blackwell have been able to move the ball, but South has been turning it over way too often to be successful.

Down to last out, Indians rally to win 22nd…