Down to last out, Indians rally to win 22nd straight 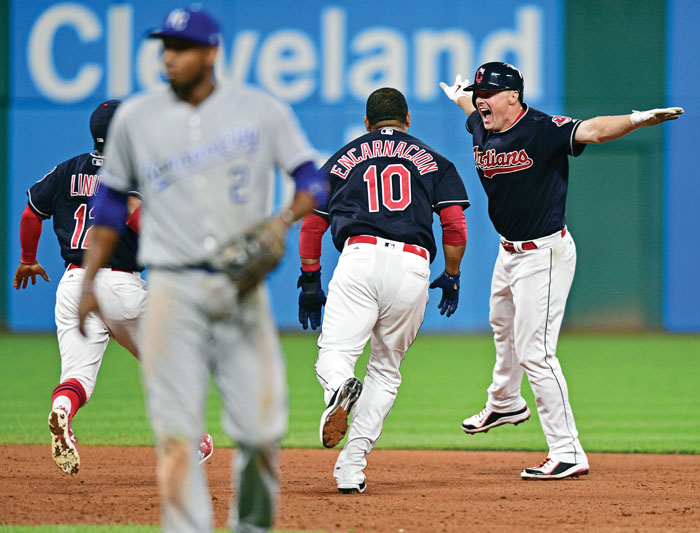 CLEVELAND (AP) — The Cleveland Indians added a walk-off win to a streak that has had everything.

Jay Bruce hit an RBI double in the 10th inning as the Indians rallied for their 22nd straight win to extend their AL record, beating the Kansas City Royals 3-2 on Thursday night to move within four wins of matching the 1916 New York Giants for the longest streak in major league history.

After blowouts, shutouts and oh-so-easy wins, the Indians, who tied it in the ninth on Francisco Lindor’s two-out, two-strike RBI double, went into extras for the first time to keep the longest streak in 101 years intact.

“This was probably the toughest one we’ve had,” Bruce said.

Ramirez led off the 10th with a hard hit into right-center off Brandon Maurer (2-2) that he turned into a double with a head-first slide. After Edwin Encarnacion walked, Bruce, the recent arrival who hit a three-run homer in win No. 21 on Wednesday, ripped a 2-0 pitch into the right-field corner.

As Progressive Field shook like it usually does in October, Bruce reached second base and was quickly mobbed his teammates, who doused him with ice water and talcum powder while tearing the front of his jersey.

These Indians aren’t stopping for anything.

Down to their last strike in the ninth, the Indians rallied to tie it at 2 off closer Kelvin Herrera, with Lindor delivering his clutch shot off the left field wall, just above the leap of four-time Gold Glove winner Alex Gordon, to score pinch-runner Erik Gonzalez from first.

As Lindor’s ball caromed off the wall and rolled slowly across the grass in left field, 30,874 fans who have watched the Indians overpower teams for the last three weeks, soon saw the AL Central leaders pull off their most dramatic win this season.

The Indians entered the day tied with the 1935 Chicago Cubs for the second-longest streak, and now only trail those ‘16 Giants, who won 26 in a row — all at home.

The Giants won 12 straight, played a 1-1 tie, and then won 14 in a row. But because the tied game was replayed from the start the next day, it didn’t technically count and therefore didn’t stop New York’s streak.

Unlike many of Cleveland’s game’s over the past three weeks, this one required a little late-innings work by the Indians, who have outscored their opponents 142-37 during this unimaginable run.

With one out in the ninth, pinch-hitter Tyler Naquin singled to left off Herrera, who then got rookie Francisco Mejia to bounce into a force. But Lindor, the blossoming superstar shortstop who has been Cleveland’s best hitter throughout the streak, came through with his double.

Cody Allen (3-6) worked the 10th and it wasn’t routine as Brandon Moss led off with a shot to the wall that Naquin caught while pinned up to the bullpen fence.

On top of getting another win, the Indians also got top reliever Andrew Miller back.

The All-Star came in to a rousing ovation in the seventh, and gave up a pair of bloop singles around a strikeout before getting an inning-ending double play.

It was his first appearance since Aug. 21, when Miller’s knee tendinitis flared up during an appearance against Boston and he went on the DL for the second time.

The left-hander will be brought back slowly by the Indians, who want to make sure he’s ready when the games become more meaningful in October.

Indians manager Terry Francona has been guarded in making comments about the winning streak. He didn’t want to make too much of it while his team makes another run at ending the Indians’ 68-year World Series title drought.

However, before the game he revealed that his father, Tito, an outfielder for Cleveland in the 1960s, was excited, “and he doesn’t get very excited very often, so I thought that was kind of cool.”

“You set out to win every game, that’s the objective every time you show up,” he said. “But I do think it’s kind of cool, you hear Cleveland a lot. If people are walking around with their chest out a little bit, I’m glad, because I like it here and I like the people here. So I think that’s maybe a byproduct of this. It’s not going to help you in the standings, but it’s good for Cleveland. Anything like that, I think it’s terrific.”

Cleveland has even more to be proud of now.

Royals: LHP Danny Duffy (sore elbow) threw a side session and could start Sunday’s series finale. He’s been on the disabled list since Aug. 26. Duffy is 8-8 with a 3.78 ERA in 21 starts.

Indians: All-Star OF Michael Brantley still isn’t running and the club still doesn’t have a timetable for his return. Before the game, Francona said the team’s medical staff was consulting with a doctor in Utah about Brantley’s injury, which landed him on the disabled list on Aug. 9. Brantley was having a strong comeback season after playing in just 11 games in 2016 following shoulder surgeries.

Trevor Bauer, tied for the league lead in wins, goes for his 17th and Cleveland’s 23rd in a row against Jason Vargas.