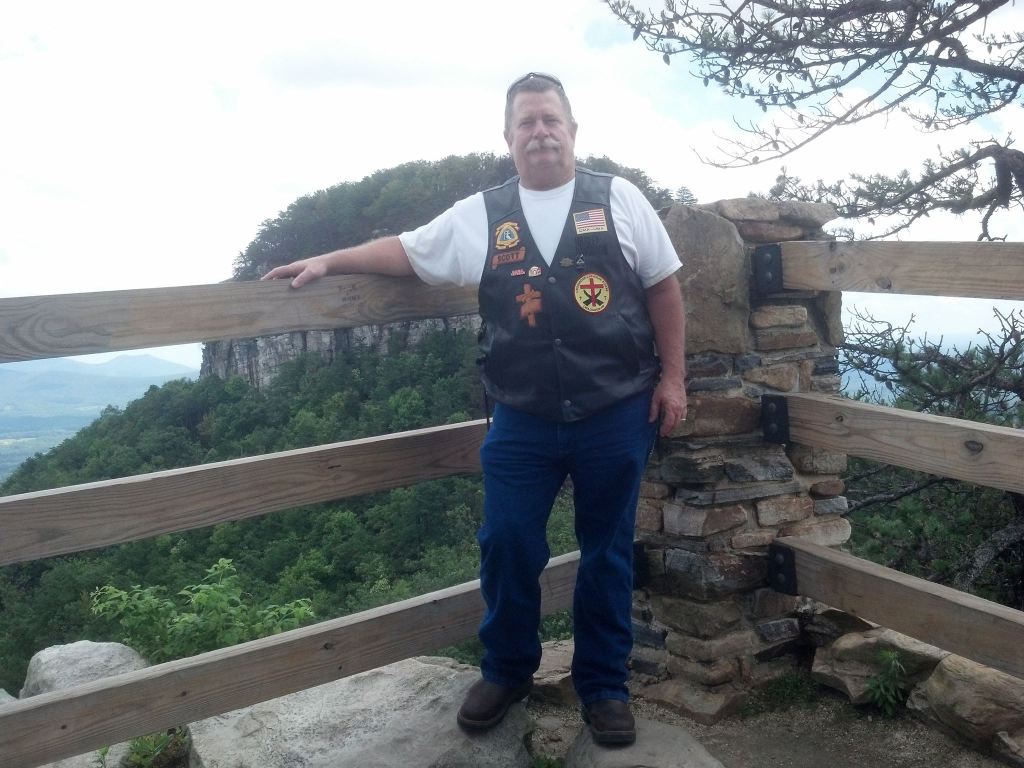 When Scott Allmon finished high school and enlisted in the Marines, he felt invincible. After marrying his high school sweetheart, Francis, on graduation night, all was right with the world. The son of a professional golfer with great potential himself, Scott’s life was filled with purpose and passion.

Then, after 36 years of marriage and two grown children (Lynn and Shannon), he decided to retire from Rowan Vocational Opportunities.

“After my parents’ death I really felt a strong desire to spend more quality time with my wife and children,” Scott said.

Having served as a production supervisor, Scott had spent most of his days teaching employment and life skills to adults with developmental and intellectual disabilities.

A born-again Christian, Scott is very passionate about helping others and sharing the fruits of his labor. After deciding to move on, he began traveling with his family and participating in the Christian Motorcycle Association as well as the Patriot Guard, which serves as a motorcycle escort for deceased military members.

While working, Scott contributed consistently to the agency’s United Way campaign. His delicious, eight-layer cookies frequently were one of the biggest money-raisers during RVO’s annual dessert auction to benefit the United Way.

Little did Scott know that his quest to help others by giving to the United Way would be reciprocated.

While returning from a leisurely ride from Lexington, he would suddenly be in for the fight of his life, suffering major physical damage and a traumatic brain injury. His brand new Harley Davidson Road King was totally destroyed in a critical car-motorcycle collision.

Scott spent 96 days in Baptist Hospital in Winston-Salem, with Francis his side. Finally, he started to show some progress.

“I realize that in the twinkling of an eye life can change dramatically,” Scott said. “I am so thankful to be alive and appreciate all the kind gestures and prayers that were rendered on my behalf.”

After Scott was released from the hospital and started making significant progress, Francis contacted Robbi Russell, Rowan Vocational Opportunities’ production manager, about returning as a consumer. Scott was getting anxious and bored, and Francis needed a break from being with him 24 hours a day.

Scott did not qualify for state or federal funding to attend RVO. Instead, funding was made available through the United Way allocations process, which assists six consumers who attend RVO. After a few weeks of working part-time, Scott easily accepted his role of consumer and continues to reach out and help others.

“I am really grateful to be a part of the RVO family again,” said Scott.

As the month of October has been designated since 1988 as Disability Employment Awareness Month by the U.S. Congress, Scott has a special sense of its importance.

Gary Yelton, executive director of Rowan Vocational Opportunities, stated, “As companies identify the talent and tools necessary for people to be productive on the job, they should be evaluated on the basis of their ability rather than their perceived disability. Thanks to a lot of support from family, friends and the Rowan County United Way, Scott is back enjoying what he likes most — spending time with his family and helping other people.”