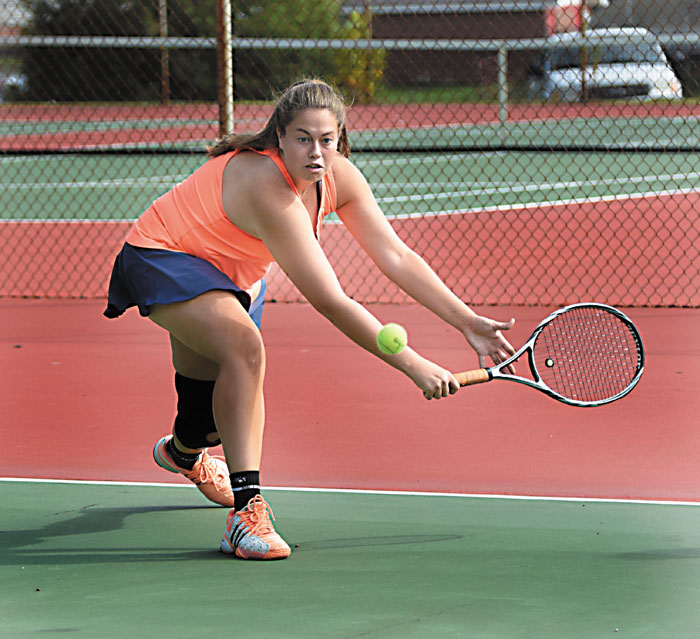 GRANITE QUARRY — Carson’s girls tennis team won at East Rowan, 9-0, on Thursday, and while a Carson victory wasn’t a shock, no one anticipated the magnitude of the triumph.

No one expected a landslide between rivals who appeared evenly matched on paper, but everything went Carson’s way.

Carson senior Siera Fesperman provided a lot of the spark. Fesperman missed her junior tennis season due to a left knee injury, but her return has elevated the Cougars to first place in the North Piedmont Conference.

Fesperman’s No. 3 singles scrap against East’s Mia Graham went on and on, 20 minutes after all the other singles matches had concluded. Carson (7-1, 4-0 NPC) had clinched the match with five singles victories. Fesperman didn’t have to win, but she didn’t let up. She kept pounding away and finally beat Graham, 7-5, 6-3.

“Mia is a backboard and she kept me running,” Fesperman said. “But I  didn’t let it get into my head. I kept hitting the shots I knew I could hit, and that was enough.”

The long, grueling match was typical for Fesperman, a grinder who wants to play college tennis. She says the knee no longer bothers her.

“Siera has had a lot of tough matches already, but somehow she always pushes through,” first-year Carson coach Kayela Wilson Galloway said. “She’s doing something right.”

Fesperman is 8-0  in singles this season. Her presence and the arrival of freshman Jadyn Kirkpatrick, who plays No. 4, has allowed Galloway to field a deep lineup. The other four Carson starters — No. 1 Emily Sloop, No. 2 Gabi Jolly, No. 5 Maci Cooper and No. 6 Quinnlan Watson — play at the same seeds as last year.

Competing in the 10-team South Piedmont Conference in 2016, Carson went 6-3, finishing in a three-way tie for third place with West Rowan and Cox Mill. East was runner-up behind Concord, losing in the league only to the powerful Spiders. East edged Carson last season in their only meeting, 5-4.

East still has three of its top four players from last year, but it lost No. 1 Katie Barnes. The next three — Angel Scialdone, Lauren Weisensel and Graham have all moved up a seed.

With so many familiar faces staring back across the net, Carson didn’t anticipate a sweep, but it happened. Thursday’s match marked the first loss of the season for the Mustangs (3-1, 2-1)

It started with a quick 6-1, 6-0 victory at No. 5 by Cooper, the basketball/softball/track standout. Cooper, a sophomore, is undefeated in singles this season.

Softball and tennis are both played in the fall in middle school, so Cooper got a late start in tennis.

“My family wanted me to try a fall sport, so it was either tennis or cross country,” Cooper said. “I picked tennis and took it up last year. I’ve won 20-some matches and only lost once.”

Wins by Watson and Kirkpatrick on the far courts gave the Cougars a 3-0 lead. Victories followed at the top two seeds just a few minutes later. Sloop’s 6-1, 6-2 win against Scialdone at No. 1 was more competitive than it sounds, but it clinched the match for the road team.

“We’ve got a good team,” Sloop said. “Getting Siera back means a lot. Adding Jaydn helps. And I think we’ve all come a long way.”

When she was still Kayela Wilson, Coach Galloway was an all-county player for East Rowan in 2011. She said it felt “a little strange” to be coaching against her old school on Thursday, especially with her husband, former Catawba football player Shawn Galloway, teaching math and coaching at East.

East also has a young first-year coach in Summer File, who is a second-year teacher.

“Tennis is a very independent sport, and our girls have been putting in a lot of extra work,” File said. “We’ve got very determined girls.”

East showed some of that determination in doubles, even with the match long decided. All three doubles matches were in doubt for a while, but Carson prevailed in all three. Fesperman, who plays No. 1 doubles alongside Jolly, was smart and forceful at the net in an 8-4 decision over Scialdone/Weisensel.

“Our girls are fighters and they’re really good finishers,” Galloway said. “They’re pretty good at taking control of a match.”

NOTES: Carson’s non-conference loss was 6-3 to Salisbury … NPC tennis teams play each other home-and-home. The East-Carson rematch is scheduled for Oct. 3 in China Grove.