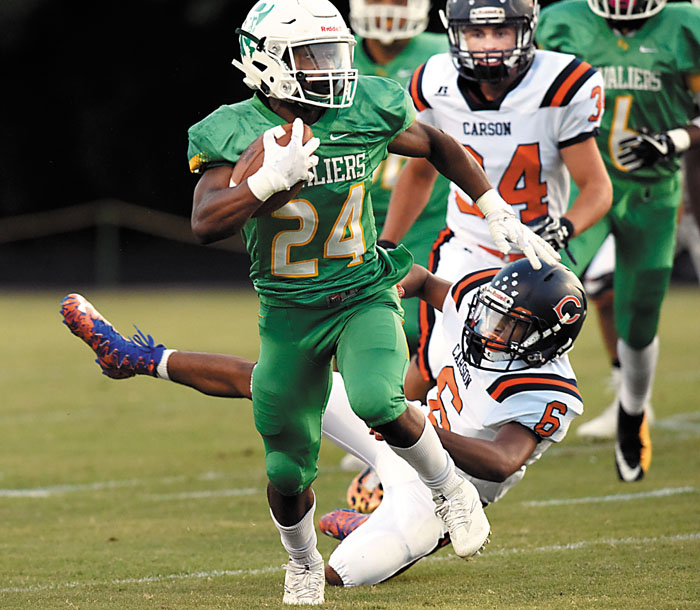 North Rowan senior Jaleel Webster rushed for 135 yards in a 37-6 win against Carson and is marching rapidly up the county’s all-time rushing list.

Webster has 2,310 yards for his career. He surpassed a couple of recent Salisbury option QBs, John Knox and Brian Bauk, on Friday as well as Lamont Smith, who piled up yards for West Rowan in 1993-94.

North (3-1) is off Friday, so Webster will have to wait another week to pass the career totals of several more ballcarriers. Former South Rowan head coach Rick Vanhoy, a Shrine Bowler for East Rowan in the mid-1970s, is 1 yard ahead of Webster. Webster’s head coach, Ben Hampton, who lugged the ball for West Rowan from 1999-2001, is 25 yards ahead of Webster.

Only the first three on that list reached the exclusive 3,000-yard club. Webster has a chance to join them.

Willis Mitchell threw for 200 yards against Carson, just the third 200-yard passing game by the Cavaliers in Hampton’s three seasons as head coach.

Logan Stoner and Russell Bacon made their first receptions of the season against Carson. Quintous Smith Jr. (9 catches, 140 yards) had two more catches and has been North’s top wideout.

It’s the first time Joe Pinyan has gotten off to a 1-3 start in 15 seasons as a head coach at Salisbury and Carson.

Carson has played three straight teams (Salisbury, A.L. Brown, North Rowan) that have winning records. That hasn’t helped the Cougars get on track. It doesn’t figure to get any easier Friday when the Cougars entertain 4A Davie County.

Carson’s basketball players did well against North. Cameron Prugh, a very recent addition to the football team, caught a 31-yard TD pass, and Jailen Williams made his first interception. Jamarius Hairston had another catch and has been Carson’s leading receiver. That trio has accounted for 2,013 points for Carson basketball — and 12 points for Carson football.

While the present is a struggle, the future should be brighter for the Cougars, who have a large freshman class with good athletes. Carson rolled 35-14 against North Rowan in jayvee action on Thursday.

Salisbury has moved to the top of the county in most of the defensive stats after thumping Thomasville, 27-6, and currently paces the six Rowan teams in pass defense, scoring defense and total defense (yards allowed per game).

The Hornets’ defense got a boost from the return of senior inside linebacker Nick Austin on Friday. Austin’s authoritative presence at linebacker allowed the Hornets to employ versatile freshman Zae Clay as a defensive lineman.

Salisbury allowed only one pass completion to Thomasville QB Nicholas Bankhead, who came in with good stats and has talented receivers. When Thomasville tried a deep pass in the fourth quarter, the Hornets had double coverage on the intended receiver, and safety Luke Holland soared for the team’s first interception of the season.

Freshman back Mike McLean doesn’t have huge stats (31 carries, 133 yards, 2 TDs), but he’s already a dependable workhorse for the Hornets.

Salisbury almost always has been a running team, especially its finest teams, so the school records for passing and receiving are relatively modest — and very breakable.

Salisbury travels to play a dangerous West Davidson team on Friday. The Green Dragons haven’t beaten the Hornets since 2007. The game will be broadcast on Memories 1280.

Sophomore Jalen Houston made three TD receptions, one shy of the school record, in Friday’s 42-20 loss to Davie County.

Jalen’s brother, Juwan, is one of the Falcons who shares the school record. Juwan had a monster game against Central Cabarrus in 2014, with five catches that went for 206 yards.

Stolsworth has turned in five 200-yard passing games in 15 games as West’s starting QB. He  has 31 career TD passes. The school record for career touchdown passes is 66 by West assistant coach B.J. Sherrill (2007-10).

Cameron Graham made his first reception of the season against Davie.

WSAT 103.3 FM will be broadcasting Friday’s West-A.L. Brown game, along with the usual Wonder broadcast on 1460 AM.

Sometimes the scouting report doesn’t help. On film, East (2-2) had watched Evan McGee play only wideout for Central Cabarrus. He moved to quarterback Friday and threw four TD passes to doom the Mustangs.

East’s defense struggled to stop the Vikings, allowing more than 600 yards of offense.

Noah Green turned in another eventful game for East with a sack and a rushing touchdown.

“We told him it was kind of a quiet 114 because he didn’t have any touchdowns, but anytime you rush for 114 yards, that’s a positive,” South coach Daniel Yow said.

South is moving the ball, getting yards. Believe it or not, the Raiders (0-3) lead the county in offensive yards per game. They actually have very respectable numbers — 586 rushing yards and 446 passing yards.

But they’re only averaging 14 points per game.

“That’s due to turnovers,” Yow said. “We’ve got to take care of the ball better. If we can cut down the turnovers, then we can translate those yards into more points.”

“We actually had a very  practice,” Yow said. “It was wet, but guys got used to handling  those hurricane balls.”

South is home on Friday and will play Ledford for the first time. With Ledford head coach Chris Adams suspended, assistant Chris Doby served as interim coach during Friday’s 21-20 win against West Davidson.

West used a defensive strategy against Davie that has worked against a lot of opponents over the years — stop the run; make them throw.

Davie (2-2) had not thrown effectively in its first three games, but that changed drastically on Friday in a 42-20 victory.

Receiver Mason Wilson has helped. He missed the first two games, but he has eight catches for 168 yards in the last two.

Small freshman Jack Reynolds (5-7, 135) is playing big. He has two receiving TDs and a punt-return TD.

Defensive end Andy Flores had a sack against West Rowan.

Carson’s offense figures to have its hands full Friday with Davie linebacker Cody Hendrix (62 tackles, 7 for loss). Broc Barnette, another senior linebacker, has intercepted a pass in three straight games.

Standout receiver Cooper Wall hopes to make his season debut against Carson on Friday or against A.L. Brown next week.

With Nick Lyerly out, A.L. Brown’s running game fell mostly on the shoulders of Jaron Cooper. He responded with 21 carries for 83 yards in a 24-16 win against Mooresville. Cooper has 402 rushing yards and five TDs on the season, and the Wonders are averaging better than 300 yards per game on the ground.

Leading tackler for the Wonders has been junior linebacker Justin Holsclaw, who also has six tackles for loss, two sacks, an interception and a forced fumble. He had 11 stops against Mooresville.

Brian Gutierrez kicked the sixth field goal of his career against Mooresville. It was a big one to put the Wonders ahead.

The Wonders will make their first visit to Mount Ulla on Friday since 2005. A.L. Brown is 14-1 against West all-time.