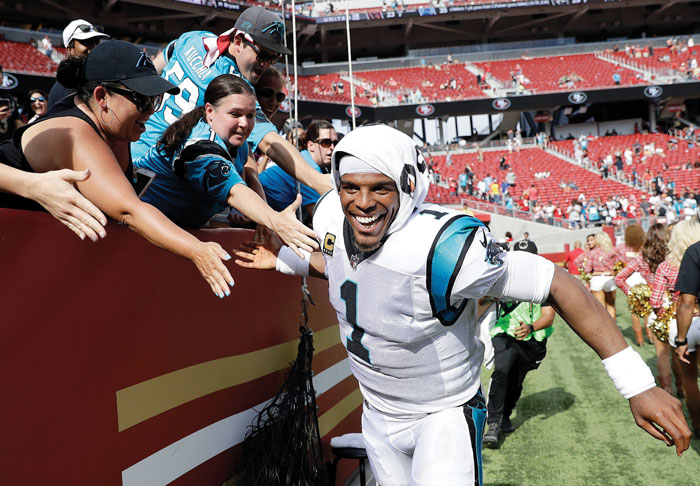 CHARLOTTE (AP) — Cam Newton trotted toward coach Ron Rivera on the sideline, his lips moving fast and furious, his eyes rolling around in his head as he berated himself out loud over an uncharacteristic mistake.

Newton had just overthrown a wide open Ed Dickson by 10 yards in the end zone, costing the Panthers an easy touchdown against the San Francisco 49ers last Sunday.

“I had to talk him off a ledge,” Rivera said.

Rivera wasn’t upset at his quarterback.

He was expecting Newton to be a little rusty in his first regular season game after being limited to one offensive series in the preseason and seeing limited reps in training camp while rehabbing from a partially torn rotator cuff.

“He got a little excited,” Rivera said of Newton’s overthrow.

Eventually Newton settled down and helped the Panthers to an easy 23-3 victory. He completed 14 of 25 passes for 171 yards with two touchdown passes and one interception.

He missed a couple of receivers, but also had some nice throws including a 16-yard completion to Devin Funchess on a skinny post route and a 40-yard TD pass to Russell Shepard in which he called an audible at the line of scrimmage.

Offensive coordinator Mike Shula agreed that Newton look rusty at times, but defended his QB by saying “he did a good job on a bunch of plays that helped us win that football game.”

Newton wasn’t in the mood to talk about his performance against the 49ers during his press conference on Wednesday, saying he’s turned his focus to preparing for Carolina’s home opener Sunday against the Bills.

He said his arm feels “great” and that he doesn’t believe there’s anything wrong with his timing.

“I’m still on a constant internal battle to gain my coach’s trust as well as my teammates’ trust just like I was a rookie, knowing that I will make the right decision,” Newton said.

Rivera said with one game under his belt, he expects Newton will be better on Sunday when Bills head coach Sean McDermott comes to town. McDermott served as Carolina’s defensive coordinator since 2011, the same year Rivera arrived as coach and the team drafted Newton No. 1 overall presenting a different challenge.

McDermott faced Newton in nearly every practice over the previous six seasons and he knows the quarterback’s strengths and weaknesses.

“He’s familiar with what we do. We’ve got some familiarity with what they do,” McDermott said. “They do an incredible job. (Offensive coordinator) Mike Shula does an incredible job of moving pieces around. It’s a very dynamic offense. … How do you stop them? That’s a challenge.”

Said Newton: “The familiarity is something that we have to use to our advantage.”

What McDermott hasn’t seen is anyone like rookie running back Christian McCaffrey, who has quickly established himself as a key cog in Carolina’s offense.

He was utilized in 47 of Carolina’s 67 offensive plays on Sunday and had 18 touches for 85 yards, including five receptions. He has become an outlet receiver that Newton has never had and should help increase his completion percentage.

Newton said since McCaffrey’s arrival the entire running back corps has elevated its game to a different level.

“As this offense evolves we have to put the ball in guys’ hands that allows us the best opportunity to succeed and allows them to be at their best,” Newton said.

Carolina’s offensive line was much improved in this season opener compared to a year ago when Newton was pummeled at Denver, taking four shots to the head in a close defeat. On Sunday, Carolina did not allow a sack and Newton only took one hard hit.

Newton said now the onus is on him to make some plays this week, execute the offense and continue to spread the ball around.

However, primary receivers Kelvin Benjamin and Greg Olsen combined to catch just three passes for 43 yards and could be more of a factor against the Bills.

“When that play is called it’s up to me to go wherever the defense dictates the ball to go,” Newton said. “I’m not picking any favorites or any type of person that hasn’t touched the ball yet. I’m leaving that solely up to coach Shula and his staff.”

They did it! Cleveland Indians win 21st straight game