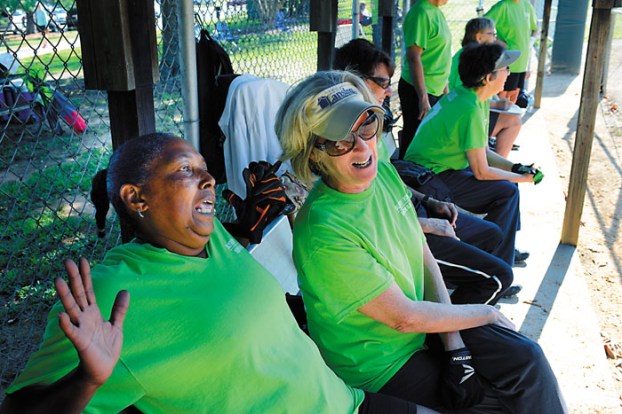 In the dugout, Sherry Click, on the left, reacts to a play on the field for he local Seniors softball team the "Roadrunners" sponsored by Trinity Oaks. photo by Wayne Hinshaw, for the Salisbury Post

SALISBURY — Players on the Trinity Oaks Roadrunners softball team took to the Ellis Park fields with a mixture of emotions on Saturday.

The occasion? The Salisbury/Rowan Senior Games softball tournament and the women’s first game since losing their starting pitcher, Brenda Kimrey, at the beginning of August.

Among team members, Kimrey is remembered as an ever-active and supportive player. Cindy Simoni, taking her place on the mound Saturday, said she felt Kimrey’s presence with her during the game.

“We know Brenda’s looking out for us,” Simoni said. “I was nervous about filling her shoes because she was an awesome pitcher. I was just there if she needed me. But if I pitched, she was always very encouraging.”

The sensation that Kimrey was there in spirit with her former team was aided by a special guest: Kimrey’s husband of 38 and a half years, Bernard Kimrey, joined the team as third base coach.

“She’d already written down that I would be here, so I told the girls I was coming. I’ve been with them since they started,” Bernard Kimrey said. “I’m part of the team, really.”

Bernard Kimrey recalls his wife’s full calendar with fondness. Not only was she an avid softball player, she also bowled and volunteered at local hospitals and cancer centers.

The Roadrunners played two games on July 9, the last time Kimrey would join them. She sat out the first, but wasn’t able to do so for the second.

For coach Renita Ritchie, Kimrey’s passing represented a great coming together of souls facilitated by the senior games.

“We’re all family. When Brenda was in the hospital and ICU, I was sending emails to every team that’s here,” Ritchie said. “They all wanted to know how she was doing. … We’re all that close. Everybody knows everybody’s names.”