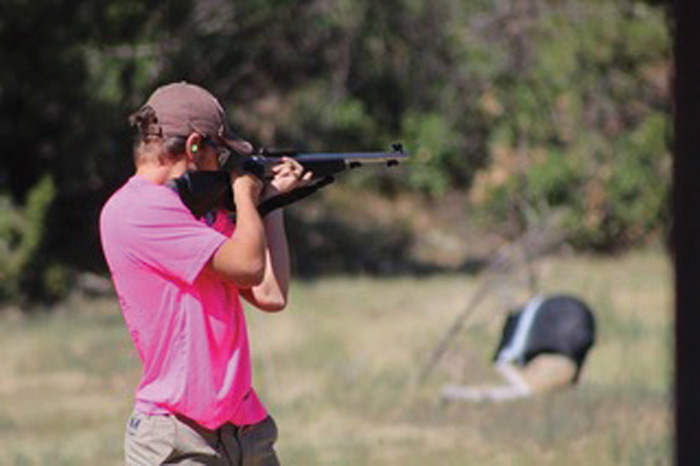 It’s not the first time the group has made it to the nationals. But for Efird and his students, the competition never gets old.

For some students, like Zack Norman, July’s competition in Raton, New Mexico, was their second or third time at nationals. But for others, like senior Walker Shellhorn, it was the first year competing on a national level.

“I’d never won nationals before, so I was pretty excited,” Shellhorn said. “…We had to work for it.”

And it was a long road to get there, as well. Marksmanship competitions start in the second half of the school year, and the group of dedicated students first had to clear tri-county, district and state competitions. The athletes split into smaller, five-person teams for competitions, Efird said. Three teams from Gray Stone competed in the state competition, earning first and second place.

“And, of course, that’s never been done,” Efird said of the same school winning the top two slots.

The N.C. Wildlife Resources Commission pays national competition entry fees for the top three teams — a blessing, Efird said, since those fees are roughly $600 to $700 per student.

In fact, student Summer Efird said, team members are expected to foot a lot of the bills for competing. They’re in charge of getting guns and archery equipment, their own ammunition and skeet, and anything else they need.

It involves a lot of fundraising, Norman added.

But the expense and the hours of practice have been worth it. At nationals, 10 Gray Stone students competed in eight categories: muzzle load, shotgun, rifle, archery, orienteering, a “big book” test, wildlife identification and a hunter safety trail.

The competition is fierce, and the events ask far more of teams than just how to shoot a gun. Walker said most people who grow up around guns know how to hit a target, but, “when you’re on a team, you learn how the bullet hits the target,” he said.

They learn about velocity, angle and the way altitude changes how a gun fires and aims. It’s more than just lining up crosshairs.

For wildlife identification, students have to know the pelts, tracks, claws and skulls of every North American animal — and not just the common ones, either.

“We had a polar bear the last year we were there,” Walker remembers, laughing.

But the hardest event, the group agreed, is orienteering, in which students are asked to find a specific location using GPS coordinates, a compass and a fixed search area.

“The problem is it’s set up with satellite and it’s not that accurate,” Walker said.

Competing against other young people who were just as good, if not better, than members of the Gray Stone team spurred them on.

“It’s definitely fun, but when you start to shoot it’s a lot of stress,” Summer said.

Students on Gray Stone’s marksmanship team are hardworking, dedicated and have a drive to win, Efird said.

“It is super cool to be a part of a school that has the ethics that this school has. … It takes all of that to win,” he said.

“I want them to believe they’re the best,” Efird said of the team.