Food for Thought kicks off for a new year 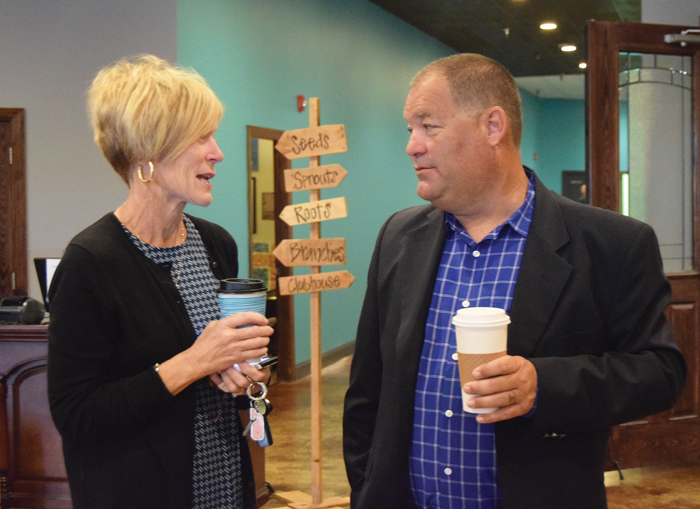 Carol Herndon, left, former executive director of Food for Thought, talks to Butch Hudson, right, who will oversee the non-profit as Rowan Helping Ministries food operations manager. The change is one of many the organization has seen this year. Rebecca Rider/Salisbury Post

SALISBURY — A lot has changed at Food for Thought in the past year, officials said at the nonprofit agency’s kickoff breakfast Wednesday morning.

Over the summer, the agency — which each Friday sends backpacks full of food home with children in need — came under the umbrella of Rowan Helping Ministries, which now handles Food for Thought’s finances and logistics in addition to providing warehouse space.

And Butch Hudson, a former “champion volunteer” at Food for Thought, has taken over as Rowan Helping Ministries’ food operations manager. In his new role, Hudson will oversee Food for Thought, the shelter’s food pantry and Jeanie’s Kitchen in the Robertson-Stanback Center.

It’s a lot of change, and a lot of shuffling, but Food for Thought and Rowan Helping Ministries officials wanted to assure the community that service to the schools will not be interrupted.

Food for Thought already used part of the Robertson-Stanback Center basement to store food and pack weekly bags, and Rowan Helping Ministries already oversaw much of its finances.

“It was sort of just a natural, organic growth and transition,” Grubb said.

In fact, the merger has allowed Food for Thought to expand. This year, 750 students will receive weekend backpacks, an 18 percent increase over last year’s roughly 635 students. The organization also has expanded into an additional school, South Rowan High School, bringing the total to 23 schools served.

All of this, Grubb explained, has been done without a budget increase. By joining Rowan Helping Ministries, Food for Thought has been able to consolidate and eliminate additional costs, which means more of its $200,000 annual budget can go toward feeding hungry children.

“We’re going to be there for the kids,” Grubb said.

Herndon chose to step down at the beginning of the summer after she accepted the job as Rowan-Salisbury Schools’ chief financial officer. Herndon said she feels the new position is “exactly where I need to be at this point in my life.”

“It’s another way to make a difference for the young people in our community,” she said.

But she’s not leaving Food for Thought in the hands of a stranger. Herndon has worked closely with Grubb since the two were both employed at Food Lion. And Hudson is an old friend as well.

Hudson said he’s basically been there “since the start” of the agency. At one time, he served on Food for Thought’s board of directors. When his term ended, he rolled right into volunteering — packing and delivering food each week.

“Instead of disappearing, I started volunteering,” he said with a laugh.

In 2016, he was named the organization’s Volunteer of the Year.

“This is a perfect example of, ‘Be careful of being a really good volunteer,’” he joked. “Or else they’ll draft you.”

Hudson will oversee more than just Food for Thought as food operations manager, but he said the backpack program is still his heart.

“It’s about love for children,” he said.

The most noticeable change in operations this year is that the organization will move away from its classic backpacks and begin using Food Lion’s reusable shopping bags. Hudson said that will cut down on costs and allow Food for Thought to continue expanding.

Hudson and Grubb urged the community to be aware that, while Rowan Helping Ministries is looking after Food for Thought, it still needs its own donations and volunteer base to keep running.

“We need all the help we can get,” Hudson said.

But they don’t plan for Food for Thought to go anywhere. If anything, they hope to see it grow and grow, reaching as many children as possible.

“It’s up to each one of us to make a difference,” Hudson said.