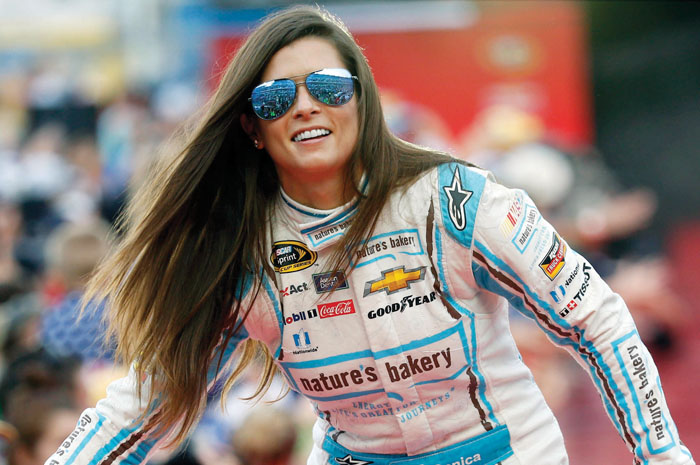 FILE - In this July 2, 2016, file photo, Danica Patrick greets fans during driver introductions before the start of the NASCAR Sprint Cup auto race at Daytona International Speedway, in Daytona Beach, Fla. Danica Patrick is done at Stewart-Haas Racing and her future in NASCAR is now up in the air amid a sponsorship shake-up. Patrick posted a statement on her Facebook page Tuesday, Sept. 12, 2017 saying her time with Stewart-Haas “had come to an end” due to a new sponsorship arrangement for the team next season. (AP Photo/Wilfredo Lee, File)

CHARLOTTE (AP) — Given the right situation, Ricky Stenhouse Jr. believes his girlfriend still wants to be a race car driver.

Danica Patrick will have to scramble to make that happen. And if the opportunity doesn’t present itself, well, she has plenty of other things to fill her time.

Patrick is at a career crossroads and will not return to Stewart-Haas Racing next season. Unless she can secure significant sponsorship to bring with her to another team, she likely won’t be able to find another full-time ride.

“I know that she enjoys racing.  She loves the competitiveness of it and has been doing it for a long time, so I think if it was up to her she would try getting in a competitive car and keep going out and competing,” Stenhouse said Wednesday.

But, Patrick has a lot of other business interests to fall back on.

She has launched a clothing line, has a book coming out next year and has made a transition into promoting a healthy and fit lifestyle. She’s 35, in a long-term relationship with Stenhouse and has acknowledged she’d like to get married and have children.

Patrick had an appearance Wednesday for Aspen Dental in Chicago and told ESPN.com that she’s in a good place mentally.

“I believe everything happens for a reason, and you never know how good something can be until you try it,” she said. “So whether that’s of course with another team or whether that’s doing something completely different, I’m open.

Stenhouse, who will make his debut in the playoffs this weekend at Chicagoland, said he’s certain she’s going to be fine.

“She is very passionate about all her other businesses that she has going,” he said. “It definitely makes her really happy doing that, so if she didn’t have all those other things going on that she enjoyed, I think I would be a little concerned because nobody wants to just quit racing.”

Patrick is the only woman racing at NASCAR’s top level, and she’s also the most accomplished. Tony Stewart called her “fearless” in his first comments about her upcoming departure from his race team.

“She has never backed down from a challenge,” Stewart wrote on his Facebook page.

Close friend Kyle Larson said Patrick has nothing left to prove in racing.

“She could leave right now and she’s made a great impact,” Larson said. “She’s a great racecar driver … the greatest female racecar driver of all time. It’s fun to get to see her away from the track. Her competitiveness is something that’s unmatched.”

Patrick has driven for Stewart-Haas Racing her entire Cup career. She is currently 28th in the standings, the lowest in her Cup career. She won the pole for the 2013 Daytona 500, won an IndyCar race in 2008, is the highest finishing female driver in Indianapolis 500 history with a third-place run in 2009 and is the only woman to lead laps in both the Indy 500 and the Daytona 500.

Patrick never won a NASCAR race in her six Cup seasons, but is the only woman to win a pole and her seven top-10 finishes are the most of any female Cup driver.

“Making the jump from IndyCar to NASCAR is not easy, yet she had the courage to do so and put up better numbers than a lot of other drivers who have tried to make that same transition,” Stewart wrote.

Patrick’s sponsorship package fell apart at the start of this season when Nature’s Bakery backed out of a three-year deal after just one season. Patrick’s contract with SHR ran through 2018, but the team has been searching for sponsorship since the Nature’s Bakery fiasco.

Smithfield Foods on Tuesday said it was moving its sponsorship from Richard Petty Motorsports to Stewart-Haas next season, and the financial decision set in motion Patrick’s departure. Ricard Petty and the Smithfield CEO traded insults over lack of performance at RPM being the reason Smithfield is leaving.

Kevin Harvick noted Wednesday that Patrick’s performance likely played into her current predicament. The two are teammates at SHR and Harvick has tried to help Patrick over the years.

“Danica has been a huge part of this sport and turned a lot of people on to racing that might not have otherwise been turned on to racing,” Harvick said. “The impact and the footprint that she has brought to our sport is big.  On the other side of that, you have the performance side of things that at some point measures into everybody’s sponsorship.”

SHR and Smithfield have not said which driver the company will sponsor next year. The team does not have a deal yet with current Daytona 500 winner Kurt Busch, and Busch, Patrick and Clint Bowyer have all had sponsorship difficulties this season. Smithfield could end up on the car Patrick has driven with another driver, or the team could downsize.

Matt Kenseth and Kasey Kahne, meanwhile, both said they are not candidates to replace Patrick.